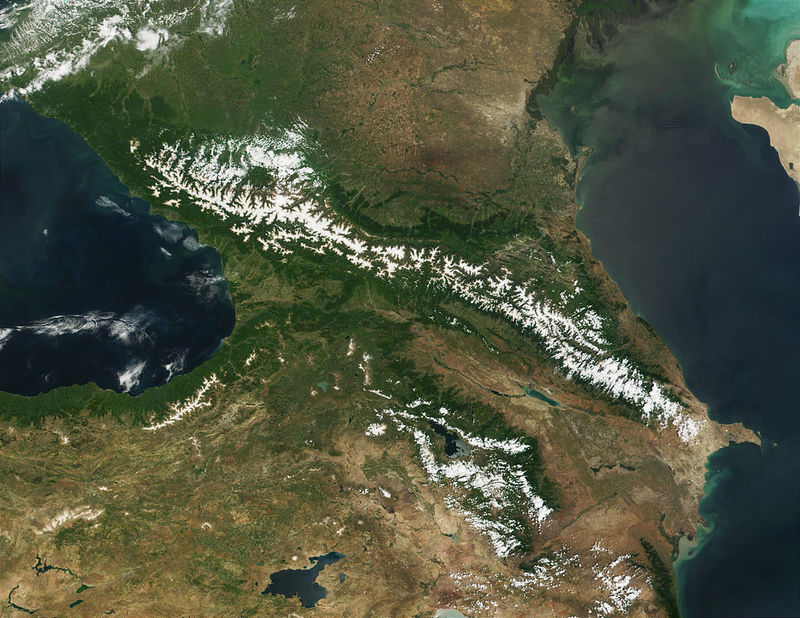 During the past 24 months however, there has been a silent revolution.  It has been read by what is inside of us, the story of human DNA, and a foray into exploring and mapping ancient human DNA.  It is rewriting the prehistory of Western Eurasia.

First of all, we have to stop retaining ideas that somehow, Western Europeans are an isolate population.  We are the result of admixture after admixture, across Eurasia.  The DNA of humans from Ireland to Iran is strikingly similar.  We are a combination of different admixtures from different populations that lived 1) North of the Caucasus, 2) South of the Caucasus, and 3) Europe.  The Caucasus, as in the photo above, has been the great division between peoples, that allowed local Western Asian populations to divide, that then to admixed in both Western Asia, and in Europe.

This revelation is not yet widely known.  Even many professional archaeologists remain unaware, or skeptical about this new tool.  New migrations and admixture events are being discovered, into Europe, and across Eurasia that contradict previous consensus.

The latest evidence suggests that the earlier humans and their cultures of Ice Age Europe, did not survive all of the fluctuations in climate.  A new genome arrived and established 14,000 to 7,000 years ago, as represented by the Villabruna Cluster of human remains.  These last hunter-gatherers appear to have less Neanderthal DNA, and a closer relationship to Near East populations than did earlier Europeans.  They may have migrated into Europe when much of the Aegean Sea dried towards the end of the Ice Age.  These late hunter-gatherers may have contributed DNA to modern Western Eurasians both inside Europe, and in West Asia. When Early Neolithic Farmers arrived in NW Europe, it was probably the descendants of the Villabruna Type that they encountered.  They may have admixed with them.  A genetic legacy from these populations appears to be blue eyes.

South of the Caucasus

The Fertile Crescent spawned the Neolithic Revolution of Agriculture.  A distinctive genetic "ghost" population that has been named the Basal Eurasians significantly contributed to their DNA, along with other hunter-gatherer populations within the area.  Their descendants, the Early Neolithic Farmers, took agriculture, wheat, barley, sheep, goats, cattle, and pigs - along with pottery production, and polished flint axe heads across the Levant, to North Africa, Anatolia, and then on to Europe.  Along the way, they may have admixed with the hunter-gatherer populations that they displaced.  Today, their surviving DNA signal in Europe, is strongest in Sardinia, followed by the remainder of Southern Europe.

North of the Caucasus

Arable agriculture made only a temporary appearance on the Pontic and Caspian Steppes, but was soon replaced by pastoralism and a very different way of life.  The horse was well adapted to life on the Steppes, and humans there domesticated it.  Mounted on horses, they could control larger flocks and herds of livestock.  They also introduced wheeled carts, enabling them to easily mobilise to the best pastures depending on season and climate change.  They also encountered and mastered the new copper then bronze working technologies.  Steppe pastoralists could range long distances across the Steppe Corridor across Eurasia. They were also adapting by natural selection to a dairy based diet, with a rising percentage of lactose tolerance into adulthood.  A significant contribution to their DNA came from a group of Siberian hunter-gatherers known to population geneticists as the Ancient North Eurasian.  The copper age archaeological culture associated with this genetic group is the Yamna or Yamnaya. 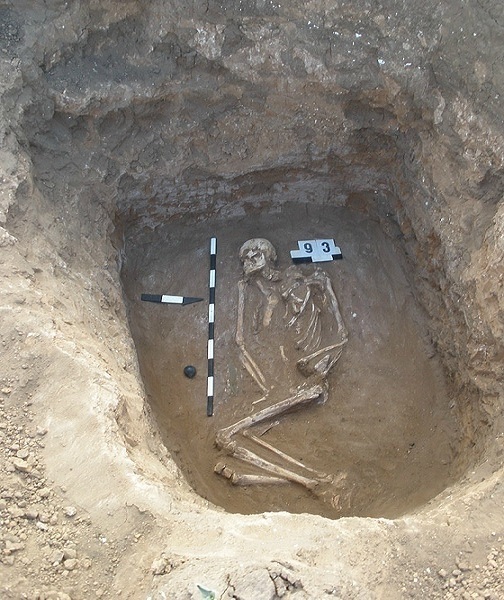 What happened in Europe?

Villabruna types entered Europe around 15,000 years ago, perhaps from the Near East.  They may have replaced earlier groups of European hunter-gatherers.

Early Neolithic Farmers from south of the Caucasus, then spread into Europe around 7,000 years ago, both across the Balkans into Central Europe, and also along the Mediterranean coast, bringing agriculture and pottery.  They may have at times admixed with hunter-gatherers within Europe.  However, their much better abilities at food production created a wave of displacement that must have been hard to resist.  They could rear so many more children.  By 5,000 years ago, their descendants dominated Europe.

Eurasian Steppe Pastoralists from north of the Caucasus, then spread into Eastern Europe around 4,100 years ago.  Why wasn't there a resistance from the Early Neolithic Farmers living there?  Latest research suggests that the Steppe Pastoralists had contracted a plague strain known as Yersinia pestis from Central Asia.  The current favoured hypothesis is that they may have accidentally spread this disease to less resistant Neolithic Farmer populations in Europe.  Some plots in Neolithic activity do indeed suggest a crisis at this time.  Therefore, the Steppe Warriors could easily dominate the depleted and weakened social structures of the Neolithic Europeans.  They brought with them, an Indo-European language, that appears to be the ancestor of most present day European languages.

In Europe, the fusion had a clear sex bias, with many Neolithic mitochondrial DNA haplogroups surviving, while Steppe Y haplogroups such as R1A still dominate today.  The fusion also seemed to give rise to a new archaeological culture known as the Corded Ware.

We know that the Yamnaya expansion didn't stop at all in Eastern Europe, it continued into Western Europe.  A fusion culture may be the Bell Beaker of the Early Bronze Age.  Again, a sex bias, with some mtDNA haplogroups surviving, but a strong dominance of Steppe Y haplogroups including the many clades of R1b.  Indeed, some of this domination is strongest on the Western edge of Eurasia, in places such as Iberia, Ireland, and Scotland, where later admixture events failed to reach - but the Steppe Pastoralists had dominated, particularly in male haplogroups.

How does this relate to this East Anglian? 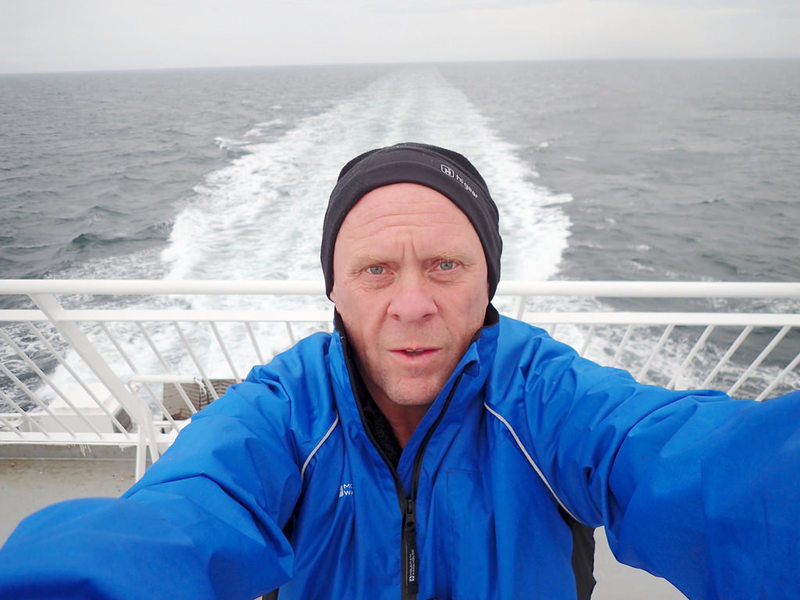 According to the latest K7 Basal-rich test by David Wesolowski of the Eurogenes Blog, my ancestral breakdown of my autosomal DNA, around 14,000 years ago would be:

My Y haplogroup (L-SK1414) ancestor would have most likely been an ibex hunter in the area of present-day Iran and Iraq, possibly in the valleys of Mesopotamia, and or the Zagros Mountains of Iran.

My mtDNA ancestor would have been Eurasian - by 4,400 years ago, a woman of the Yamnaya, on the Pontic and Caspian Steppes, in a pastoralist tribe.

So, you get where this is taking me.  Step back into prehistory, and what DNA is revealing to me is that my ancestors were NOT all in Britain, or even all in Europe.  They were scattered across Siberia, the Steppes, the Caucasus, the Zagros, the Middle East, the Levant, and go further back, to Africa.

Alternatively, the equally recent Global 10 test, run by my friend Helgenes50 of the Anthrogenica board, resulted in:

I am a Western Eurasian. 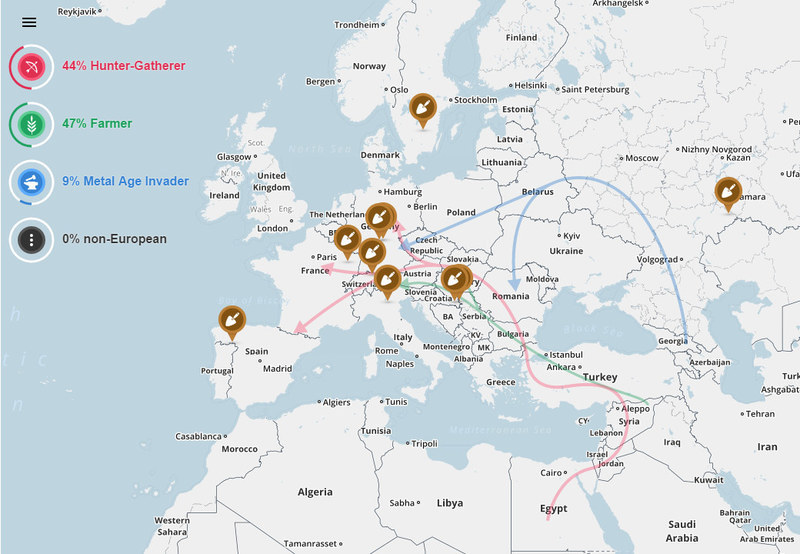