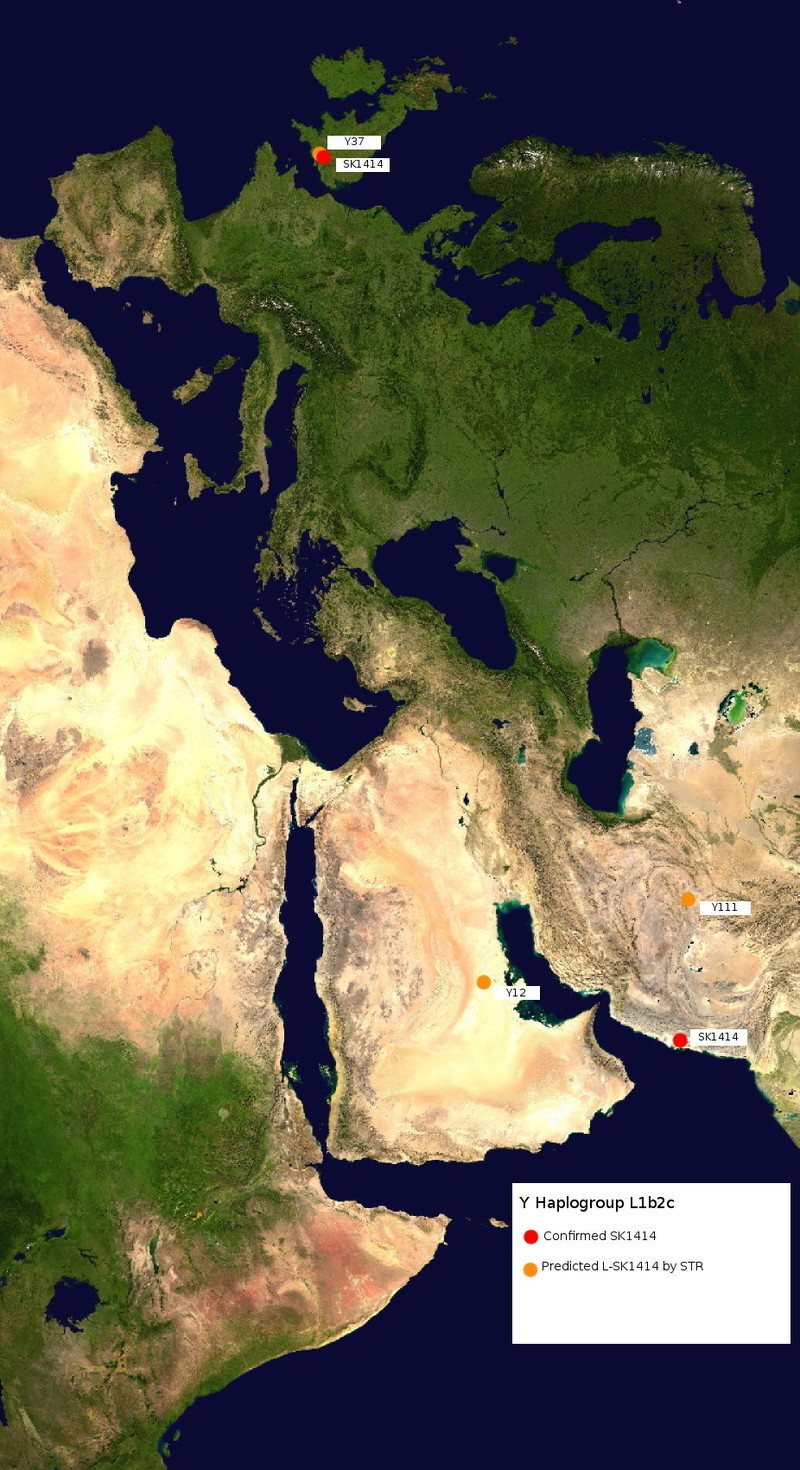 By Hellerick (Own work) [CC BY-SA 4.0], via Wikimedia Commons.  Modified by Paul Brooker.

I've created this distribution map of known Y haplogroup L, L1b2c or L-SK1414. This is my Y-DNA haplotype.  Not a lot of dots there are there?  This is how rare that this clade is.  L1a and L1b most likely (in my opinion) originated during the last Ice Age circa 18,000 years ago, south of the Caucasus, and west of the Caspian Sea in Western Asia.  In other words, in the area of present day Armenia, Azerbaijan, and North-west Iran.  Again, I emphasise, that is just my opinion, looking at present-time evidence.

Y haplogroup L itself may have diverged between L1 and L2, not so much earlier, or so far away from this region.  Again, just my present opinion.

My sub clade of L1b, is so rare, that it is impossible to say.  As can be seen from the map.  However, this is my blog, so I'm going to push out on this one.  My very best guess would be further to the East than it's parent.  I suspect South East of the Caspian Sea, in what is now Eastern Iran.  I could well be wrong.  We have so few tests from nearby Afghanistan for example.  So far, the SNP SK1414 has only been reported twice.  1) in Makran, SW Pakistan, in a Balochi speaking man.  Balochi is an Iranian language, closely related to North-West Iranian languages.  Researchers suggest that the Balochi people of Makran, largely migrated from south west of the Caspian.

The only other guy in the world so far confirmed is little old me, an Englishman.  I trace my surname (direct paternal) line back to the Thames Valley of Oxfordshire / Berkshire 270 years ago.  If my biological line follows that.  A number of STR testers of English descent appear connected to me by STR analysis.  They all descend from Thomas Chandler, who lived around the same time as my earliest recorded ancestor - only 32 miles away at Basingstoke.

From all of the evidence, I conclude that my Y ancestral line moved, probably in one generation, from Western Asia, perhaps from he edge of Persia, to Southern England conservatively between 2,000 and 400 years ago.  Although I would speculate between 1,600 and 600 years ago - during the Medieval or close by.