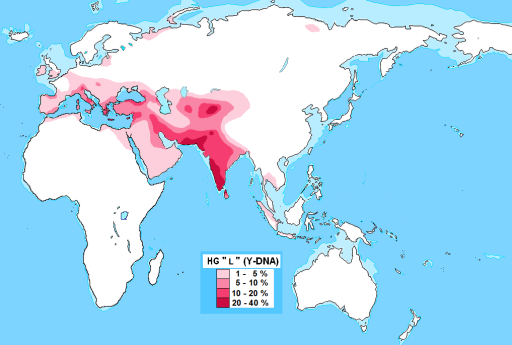 Y-DNA, may on the face of it, appear to offer a limited understanding of total biological ancestry.  All sixteen of my great great grandparents were direct ancestors, not just the Y great great grandfather.  However, this lineage offers us evidence that can be genetically tracked, then mapped into relationship.  It could be done to ascertain parental, or non parental events.  It can be used to check the biological validity of relationship to cousins.  As more people investigate and record their haplogroups, haplotypes, STR markers, and SNPs, so we can for example, start to use them to map biological relationship further back.  Y-DNA is particularly useful, not only because of it's markers, but also because it can be plotted to surname studies.  In Western societies, the surname often follows the Y lineage for several generations.

However, Y-DNA (nor the maternal mtDNA) evidence doesn't just stop there.  As more people investigate, submit, and record their data from around the World - and as anthropologists and archaeologists add ancient DNA data from ancient and provenanced human remains to that record, so we can build and plot a world map of the human family, how it relates, how it was distributed globally throughout prehistory.

Both Y and mt DNA carries mutation markers, that define a Haplogroup. A haplogroup is a family of shared descent.  These haplogroups are ancient.  The paternal Y-DNA haplogroup that this resource page is dedicated to has been designated as L.

However, mutations do not stop with the formation of a new haplogroup.  They continue through the generations.  As lineages divide between different sons, across many generations, so these mutations in the Y-DNA for example, continue to accumulate down the diverging lineages that once shared common descent.  We are all unique.  The sub clade of L that this page focuses on is L1b.  All male carriers of L1b will carry a SNP (Single Nucleotide Polymorphism) on their Y-DNA that has been designated as M317. This SNP will be downstream of another SNP that has been designated as M22.  Finally, a Y-DNA can be said to have a terminal SNP.  A terminal, refers not to the Haplogroup (in this case L), but can be used to define right down to the last SNP on the Y-DNA, that is shared with others on a record.  If someone for example, carries Y-DNA that is proven (or predicted by comparison) to be Y Haplogroup L, and to carry M317, then their Y terminal could be designated as L-M317, or alternatively, as L1b.  This is also sometimes referred to as a haplotype.  However, a haplotype can also refer to a particular STR. 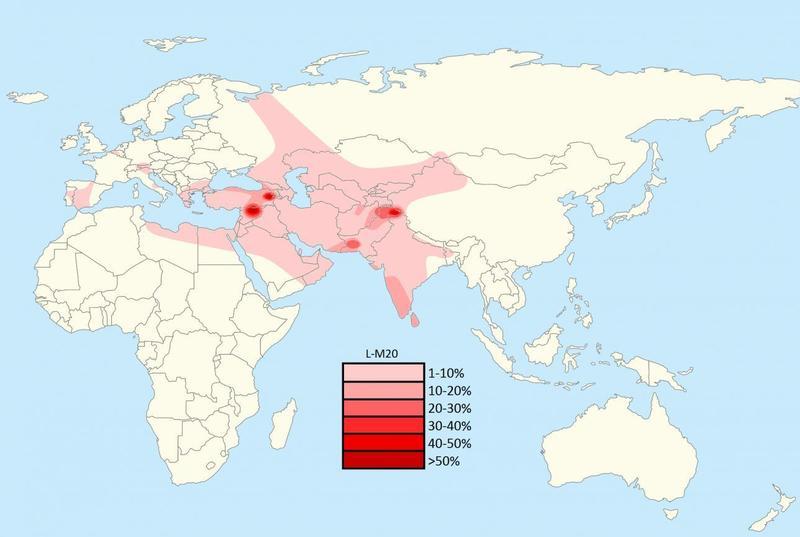 The above image illustrates a modern day distribution of Y Haplogroup L (M20) as proposed and created by Anthropogenica user Passa.

Y Haplogroup K formed from Y Haplogroup IJK in the Y-DNA of hunter-gatherer fathers and sons, that share a MRCA (most recent common ancestor) during the Upper Palaeolithic, circa 45,400 years ago.  Where did these Y ancestors live at that time?  We think that they lived in Western or Southern Asia.  Iran is a favourite proposal. Earlier Y ancestors had most likely exited Africa 20,000 years earlier, and were well established in Asia.  They had most likely met and confronted another archaic human species, The Neanderthal. This was however, a time of great expansion by humans.  The first anatomically modern humans had recently entered Europe, while other modern humans were arriving in Australia.  The Ice Age was in a flux, but glaciation was advancing.

The most recent common Y ancestor to carry Y Haplogroup LT lived circa 42,600 years ago.  Then a mutation in the Y-DNA lead to the formation of Y Haplogroup L, with a most recent common ancestor 23,200 years ago, close to the time of the Last Glacial Maximum, when ice sheets were reaching their maximum positions.  K, LT, and early L, most likely all originated in Upper Palaeolithic hunter-gatherer populations living during the last Ice Age, in the area of modern day Syria, Iraq, Iran or Pakistan.  It was a time of increased stress on human populations, that were having to adapt to some severe environmental challenges, and may have at times faced isolation into a number of Ice Age Refuges.  Some of these Upper Palaeolithic, Ice Age hunter-gatherer refuges may have been close to the Black Sea, others close to the Caspian Sea, but they were most likely located somewhere between Eastern Anatolia, and Eastern Iran, south of the Caucasus.

The oldest divergence within Y Haplogroup L.  L1, as characterised by the SNP M22, diverged from L2, as characterised by the SNP L595.  L2 was only recently discovered, and forced an ISOGG revision of Y Haplogroup L and it's nomenclature that is still causing problems.  In this article, unless stated otherwise, I am using 2017 Nomenclature.  L2 or L-L595 is very rare, but has so far cropped up sporadically across Western Eurasia, including in Azeribaijan, Turkey, Sardinia, England, and Tartaristan.

That is L2 dealt with.  However, most Y Haplogroup L falls into L1. Let us start to look at the main branches of L1.  Remember, L1 is defined by the SNP M22: 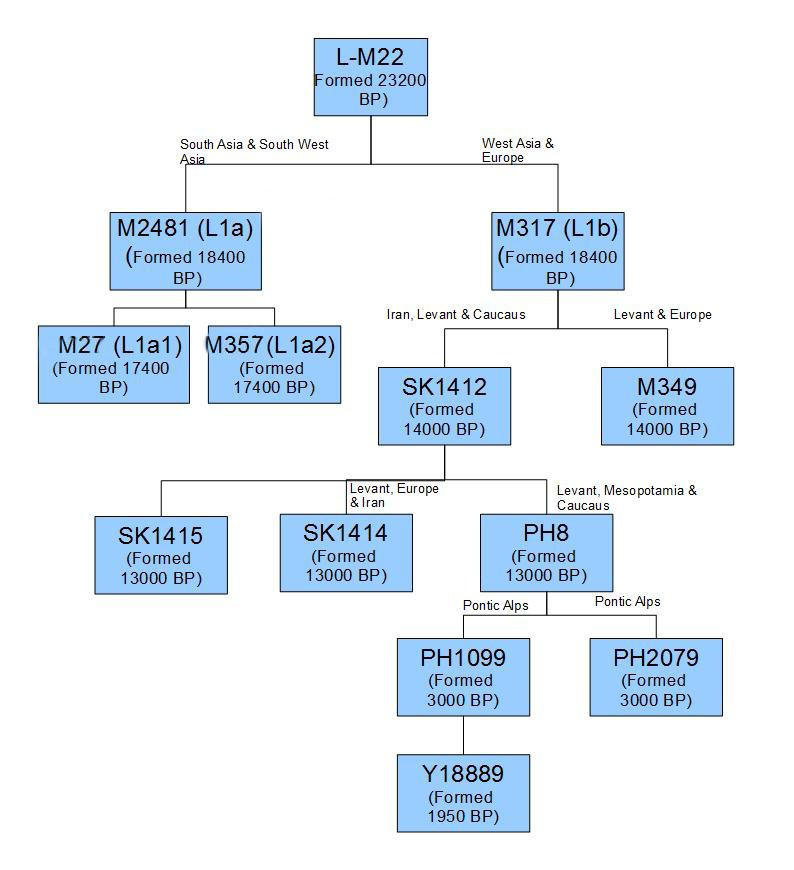 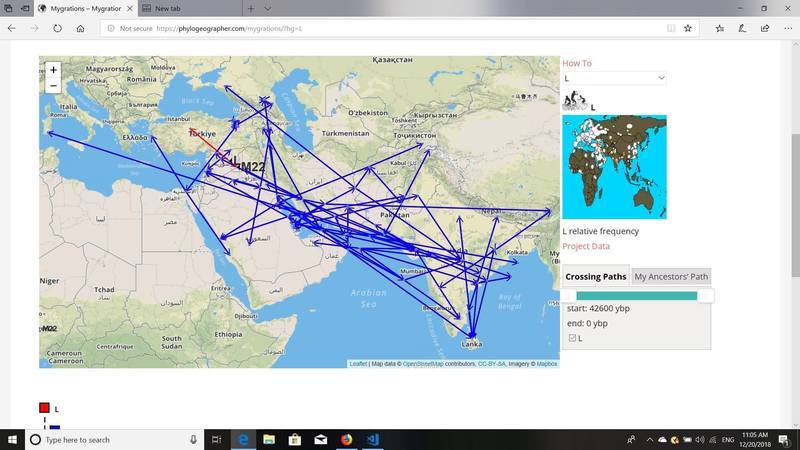 Proposed Migration Map of L-M22 (L1) by Phylogeographer at https://phylographer.com/mygrations/?

As can be seen above, this split occurred around 18,400 years ago, possibly somewhere between what is now Iran and Pakistan.  The L1a branches inherit the SNP M2481, and the L1b branches inherited M317.

First of all, let's look at L1a, because although it is not my sub clade, in terms of modern day population size, it appears to greatly outnumber any other L sub clade.

Pakistan and India - Present Day Home of L1a1 and L1a2

Defined by SNP M27 (on older nomenclature as still used by 23andMe, this was formerly L1*) is mainly found in India, particularly South West India, and in Sri Lanka. This is perhaps the most populous modern day L sub clade, found in 15% of Indian males.  However, it is not restricted to India, and has also been found in 20% of Balochi in Pakistan, and has also been reported in Kirghiz, Pashtun, Tajik, Uzbek, and Turkmen males across Central Asia.

L1a and L1a1 (L-M27) at Birds Eye Cave, Armenia 6161 years before present.
Ancient Y DNA from the Copper Age has emerged from this location in Armenia, and included L1a, and L1a1.  This might suggest, that although very successful today in India and Pakistan, that it has a Western Asian origin.

Has defined by SNP M357 (on older nomenclature as still used by 23andMe, this was formerly L3*).  This sub clade is mainly found in Pakistan, but also Saudi Arabia, Kuwait, The Chechen Republic, Tajikistan, India, and Afghanistan.  It has been found at 15% in Burusho populations, and at 25% in Kalash populations.  It is much more common in Pakistan than in India.

So, the L1a sub clades - spreading down into Southern Asia, and accounting for potentially millions of Y Men there.  Far more than any other branches of Y Haplogroup L.  However, Southern Asia is unlikely to be the origin of L.  That origin is more likely, as stated earlier, to be the place with the most diversity in branches.  That points more towards again towards Western Asia.  It's just that ancient carriers of L, appear to have been particularly successful in Southern Asia, and to have fathered more sons there.

We now move onto the branches of particular interest to myself, because I carry a Y Haplotype that belongs here.  L1b is defined by the SNP M317, that formed circa 18,400 years ago, most likely in the area of modern day Iran, or elsewhere in Western Asia. 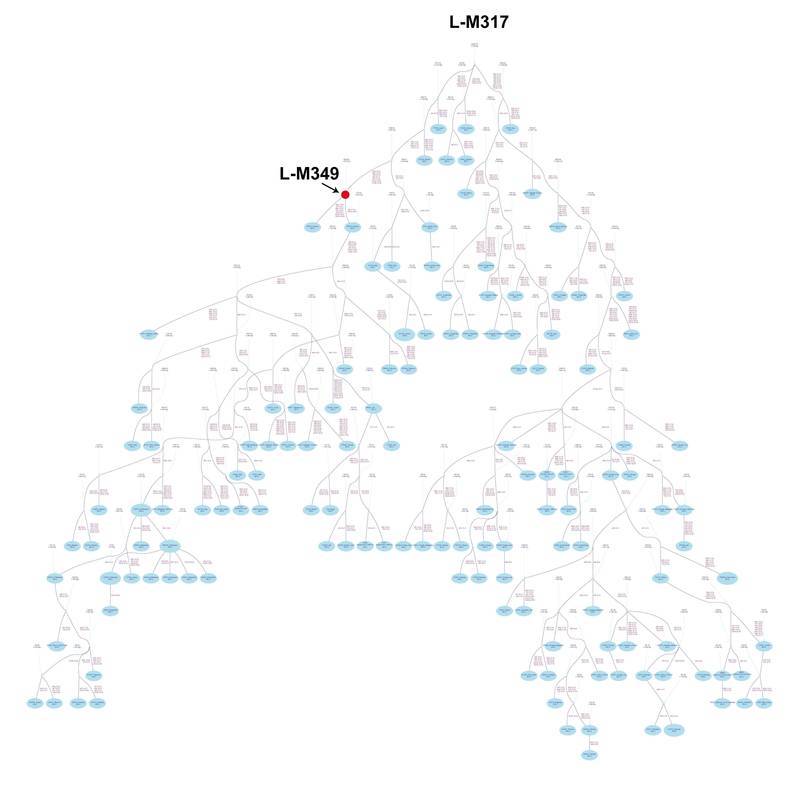 Phylogenetic tree of L1b by Anthrogenica user Caspian (with permission):

L1b is mainly distributed across Western Asia, from modern day Turkey, across to Pakistan.  However, as we will see, it also spreads in low densities across parts of Europe.  it is very much, the "Western L".

Around 14,000 years ago, another split occurred in the L1b (M317) branch. A new SNP, M349, defined L1b1.  Today, L1b1, or L-M349, is found in Western Asia, in Lebanon, Syria, Turkey, Armenia, etc.  However, it is also found scattered in low densities through parts of Europe.  It crops up in South Europe, often close the the Mediterranean Sea, including particularly in parts of Italy.  It also forms a light cluster in Central Europe. 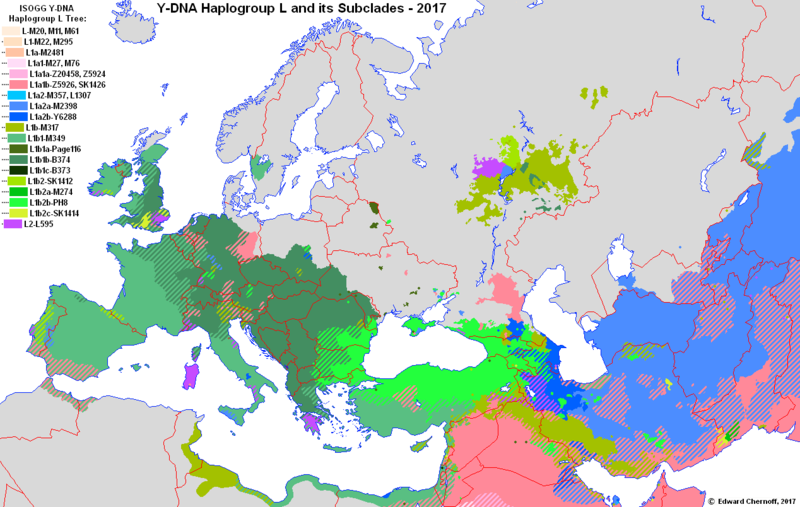 L1b2a (L-SK1415), has as far as I know, only been detected in a Makrani Balochi survey in SW Pakistan.

L1b2b (PH8), is found in Turkey, Greece, Armenia, Chechen Republic, Iraq, etc.  It is associated particularly with the Pontic Greek ethnicity from Eastern Anatolia, and around the Black Sea.  A further division within PH8 has been detected at around 3,000 years ago.

L1b2c (L-SK1414, FGC51074), has so far been SNP detected only in Makrani Balochi, in SW Pakistan, Lebanon (Druze), and in England. STR predictions for L-SK1414 have also been found in Goa, Syria, Iraq, Kuwait, UAE, Cyprus, Tartaristan, France, Italy, Saudi Arabia, Iran, Turkey, and Azores.  In addition to SK1414, I have with the assistance of Gareth Henson, a FT-DNA Big Y test, accompanied by further analysis of their raw data, by Yfull, and FullGenomes, ascertained 117 novel SNPs looking for first time matches.  As can be imagined, I'm very keen that further L Y-Men should test. 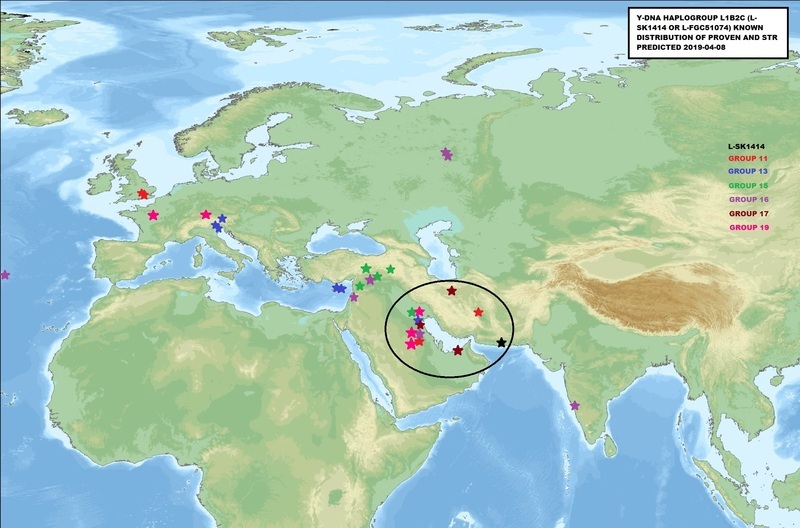 We have seen above, that again, and again, Y haplogroup L (M20), and several of it's sub clades appear to have Western Asian origins, despite success of some of those sub clades today in India and Pakistan.  Y haplogroup L has not been linked to the Yamna hypothesis, that has taken credit for the origin of many haplogroups that are successful today in Europe.  Y-DNA L was located to the southern side of the Caucasus, between present day Turkey and Pakistan.  However, two particular Y-DNA L sub clades do make mysterious appearances across Europe.

1) L-L595 (L2) has only recently been discovered, so far, exclusively across Europe, in very low numbers.

2) L-M349 (L1b1), downstream of M317, also spreads across South Europe, and clusters at the Rhine-Danube.  I have on 23andMe forums, seen a number of testers that unfortunately have not tested their Y elsewhere, claim Ashkenazi paternal ancestry, but this is far from common to all European L-M349 samples. Although rarely forming much more than 1% of all Y along the Mediterranean coast of Southern Europe, this percentage does occasionally rise higher, for example, in parts of Italy.

When did L2 or even L1b1 enter Europe?  L2 has only so far been found in Europe.  There are some suggestions that some European L could be survivors from the Eurasian Neolithic.  However, ancient DNA has not yet been found to support this hypothesis.