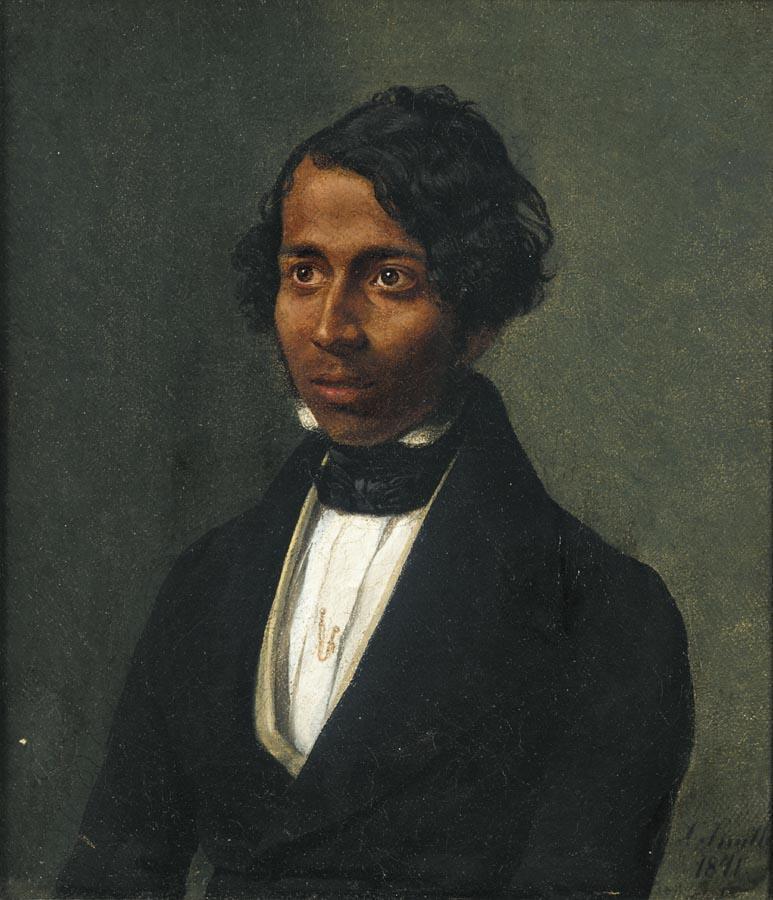 See page for author [Public domain], via Wikimedia Commons.  "A Portrait of an Indian Gentleman," by A. Smith, 1841.  No.  This portrait was not one of my ancestors.  It is believed to have been painted in England.  However, my Asian Y ancestor must have been here previous to 1700.  This relates to my Y line, inherited down my father's, father's father line and so on.  Descendants for example of Reginald J Brooker, should share this heritage.  My Y-DNA research indicates that I had an Asian ancestor, that most likely moved to Southern England sometime between 1,800 and 500 years ago.  I did find this portrait however, on Wikimedia Commons, whilst searching the subject of who my Y ancestors in Asia were, and why one may have travelled to England.

Let's start a little further back.  My Y-DNA is West Asian in origin.  I share my current terminal Y-DNA SNP (L-SK1414) with a guy that is a Balochi speaker from Makran in SW Pakistan, close to the border with Iran.  I also match fairly well (on STR tests) with a guy who's paternal line hailed from the town of Birjand, South Khorasan, Iran.

Now, although my Australian Y cousin with ancestry in South Khorasan didn't know of any family Balochi link - it's possible.  Balochi, have lived in that region of Eastern Iran.  It may, just may, be a link.  Who are and were the Baloch?

Origins of the Baloch People 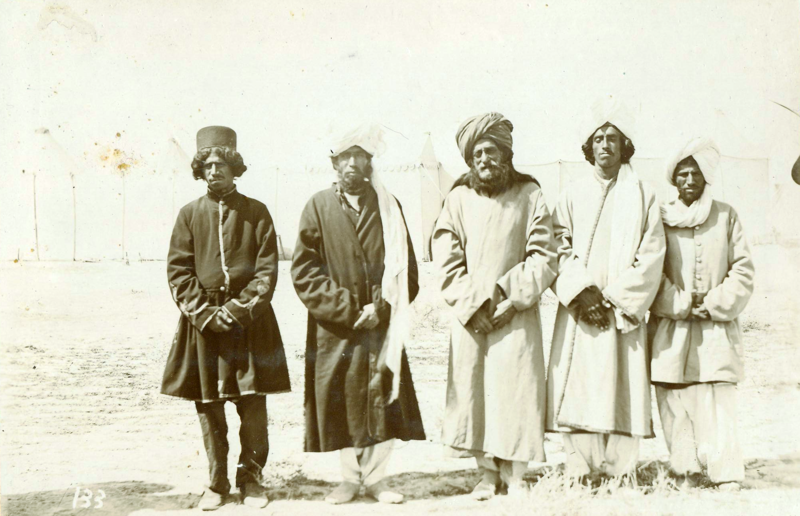 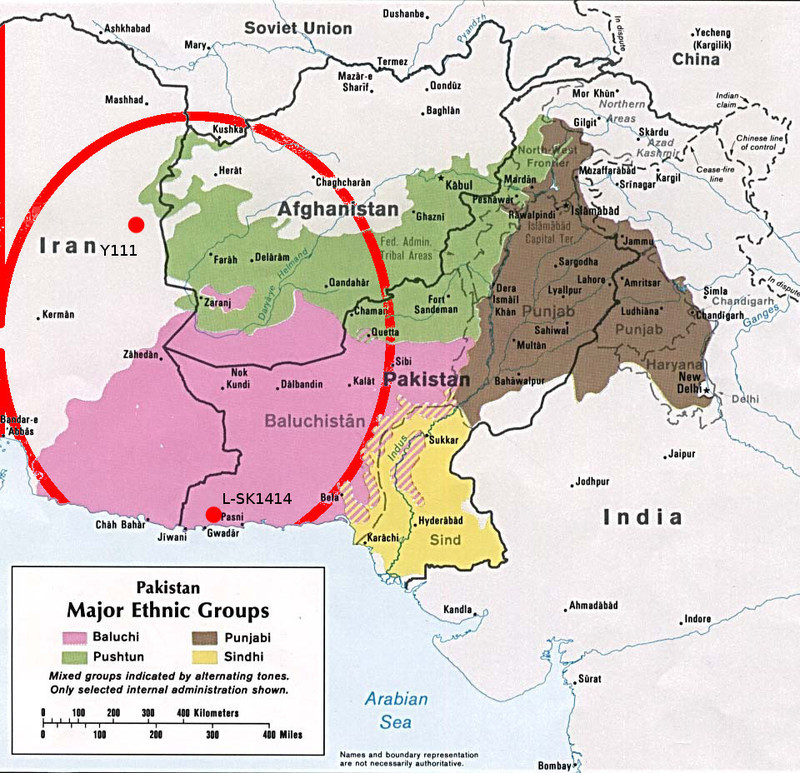 The pink areas display the main Balochi areas today.  The red outline suggesting likely homelands for my Y-DNA.  Also marked by red spots, are the homes of the two recorded L-SK1414 in that area.  It is estimated that there are 15 million Baloch people across the World today.  The Balochi language is Iranic.  It has been ascribed by linguists as belonging to the North-West Iranic family, close to Kurdish.  Yet the Balochi today, are in the South-East of the Region.  The traditional origin story told by the Baloch people, is that they were Arabic, and originated in Syria.

However, linguists and historians today usually suggest that they were in fact, refugees from Arabic expansion, that migrated mainly east and south east, over several centuries (starting circa 7th Century AD) from an area close to the Caspian Sea in Northern Iran.  This puts Birjand incidentally, on the route of that migration.  It also leads from what I consider to be the homelands of the mother clade - Y hg L1b (L-M317), between the Caspian and Black seas.  Today, the majority of the Baloch are Sunni Muslim (some are Shia).  However, many early migrants from the North West may have ascribed to other religions including Zoroastrianism.  An attack on Persia by the Seljuk Turks from Central Asia during the 11th Century AD, may have accelerated Baloch migration to present day Balochistan. Today, the Baloch of Pakistan, Iran, and Afghanistan are divided into an estimated 130 tribes.

As for Balochistan itself, when Alexander of Macedonia, passed through it, during the 4th Century BC, it was known as the Kingdom of Gedrosia.  Balochistan has long been sandwiched and pulled between the great empires of Persia, and India.  Even today, it is divided between these two political boundaries.  A large region with a sparse population, but a firmly stamped ethnic identity.

According to Akhilesh Pillalamarri "In the 1500s, Balochistan like Afghanistan to its north, became divided into zones of control between the Safavid Persian Empire to its west and the Mughal Empire to its east. This approximately reflects the Iran-Pakistan border today."

Could this friction even have lead my Y ancestor to move?  When did European ships appear on the coastline?

That's the Baloch hypothesis.  Now for the next, the Lascar hypothesis. 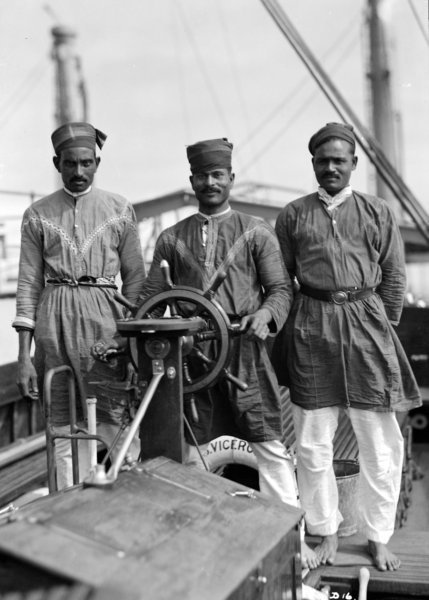 By National Maritime Museum from Greenwich, United Kingdom [No restrictions], via Wikimedia Commons. Three lascars on the Viceroy of India.

Our Y ancestor may have moved to Southern England for all sorts of reasons:  merchant, diplomat, adventurer, slave, hostage, prisoner of war, trader, mercenary, servant, religious convert, refugee, etc.  Genetic genealogists tend all too often to cling to known historical events such as battles.  I'd be very wary of that.

With that in mind... here is one new possibility (as opposed to a probability), that I am presently considering.

Lascar derives from al-askar, the Arabic word for a guard or soldier.  When European ships first started to sail the trade routes to India and the Middle East, they often suffered losses of life on the way.  Subsequently, they would recruit new sailors at their ports of call.  Arab traders had scattered seamanship and sailing skills along the coast line around the Persian Gulf, and the practice of Lascars may have already been established before the first Portuguese ships picked them up.  The European practice of taking on Lascars is believed to have started as early as the 16th Century.  It continued through to the 20th Century.  Just about in time, to account for my Y-DNA in Southern England, that turns up during the early 18th Century in two surname families.  It's possible.

Apparently, the Lascars received even poorer food and water than even the late British sailors that they replaced.  Therefore, many jumped ship when they reached England.  Their intentions may not have been immigration, but they couldn't risk the return voyage.  This, it is said, was the very first root of the present day Asian settlement of Britain. It has been speculated that the portrait at the top of the post, may have been of a former Lascar, or ... servant!  Why not though, a traveller that has succeeded?

Why would a 16th or 17th Century European trading ship visit Balochistan?  Did it?  Our ancestor may have already moved either westwards or down to an Indian port.  He may have been a professional sailor! 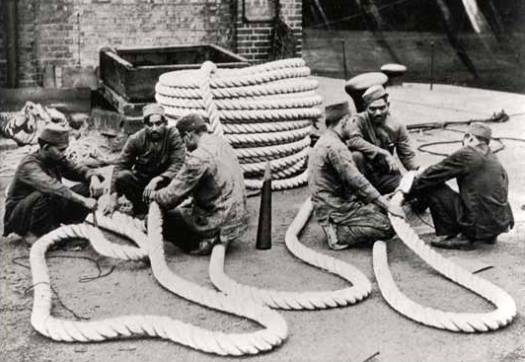 By National Maritime Museum from Greenwich, United Kingdom [No restrictions], via Wikimedia Commons. Lascars at the Royal Albert Dock in LondonThree lascars on the Viceroy of India. 1936.