Continuing on from this post about my 3rd great grandfather Robert Smith, who was imprisoned at Norwich Castle Gaol for his part in a swing riot at Attleborough in 1831.

I'd uncovered a Robert Smith who took part in the riot in Attleborough, but a question always arises when researching an ancestor with a common name - was he / she my Smith, Brown, or Jones?.  So I need to look closer.  And I do see a problem:

Then a few days ago, on the England & Wales, Prisons &Punishment, 1770-1935 collection at FindmyPast.co.uk, under correspondence, I find this Norfolk Court record, dated 30th November 1831: 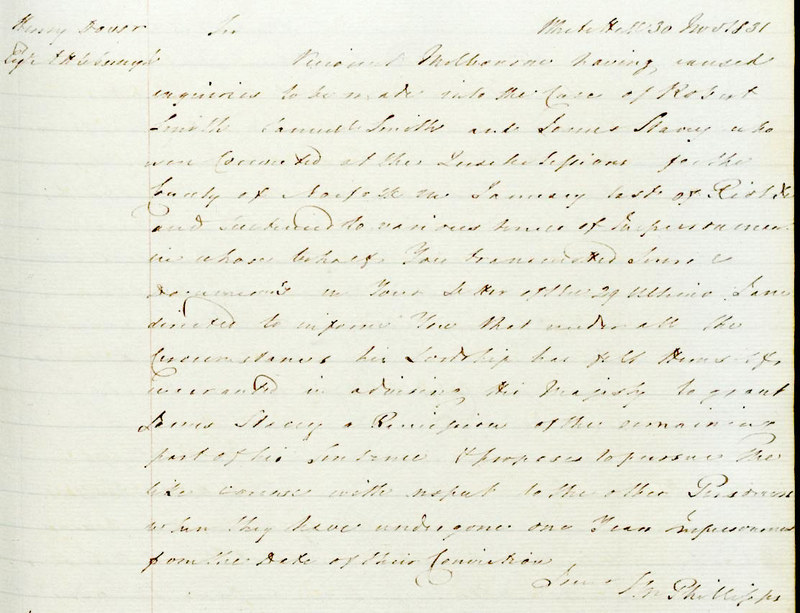 I had problems reading even this copy that I had optimised with an image editor, so I had to get help on a Facebook genealogy group.  Apparently it is an appeal by James Stacey, one of the three imprisoned ring leaders, for sentence remission.  It also gives notice that the other two, Robert Smith, and Samuel Smith would also be appealing as soon as they had served one year in prison.  Did they receive remission?

I also found this under the same collection, dated to "1832" under Home Office Registers Of Criminal Petitions: 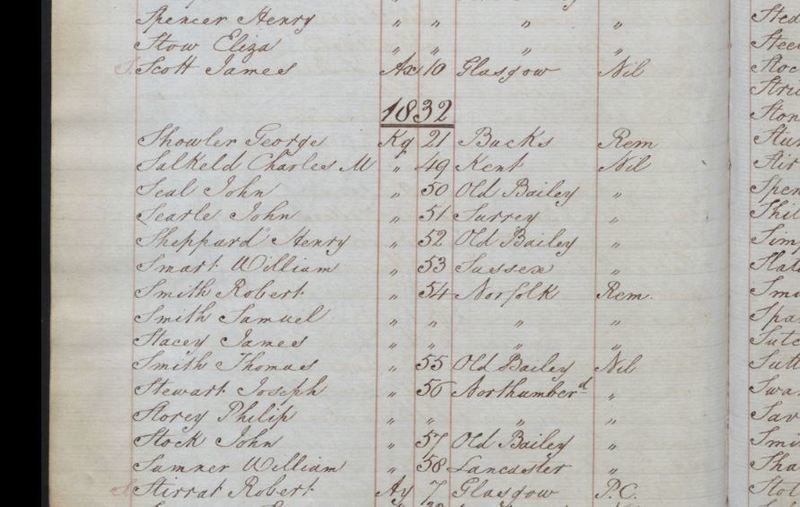 James Stacey, Robert Smith, and Samuel Smith are all still serving time.  I don't know how early in 1832 they are being recorded there - but, their sentence types are all recorded as "Rem" (remission), so it does look to me as though their original sentences were reduced.  If they were released on remission by late March 1832, then Robert Smith the Swing Rioter had just enough time to return to my 3rd great grandmother Lydia Smith (nee Hewitt), and to father Robert "Hewitt" Smith, the junior.  If so, do you see who the rector was at their son's baptism?  The Rev. Franklin himself.  The guy that Robert Smith held a mattock over, that with the thresher burning, attacks on the workhouse, and general rioting, landed him in Norwich Castle Gaol in the first place!  Two years later he's baptising Robert's son.

Also at FindmyPast.co.uk, I've found more newspaper reports of the case.  In my previous article, I reported:

Times were incredibly difficult for the poor.  I wonder if he was behind the voice that was reported during the Attleborough Riot by a witness:

Well.  One newspaper report stated that it was indeed our ancestor Robert Smith that said this:

Why did he do it?  What was Robert's status?  Around that time, he was recorded as a labourer.  Later, a hawker, and an umbrella maker.  Even later in life, after our 3rd great grandmother Lydia, died, he married Frances Saunders (nee Husk), and they moved up North on the railways, to work in the cotton spinning town of Sulcoates.

But I may have discovered another element to his story?  Why he was angry, and why he was accepted or identified as a ring leader of the riot? 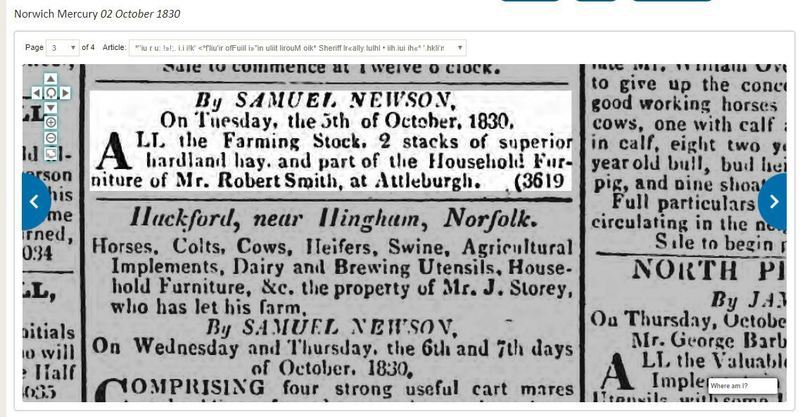 Had Robert himself recently experienced a loss in status?  Did this finally drive him against the local Establishment?  In 1841, he was living with his wife Lydia, and six of their children, at his father-in-law's farm on the edge of Attleborough at Hill Common:

Maybe we can now understand him, just a little more.  Also on that 1841 census report - you can see his son Robert (Hewitt) Smith the junior, there aged eight years.  He's the guy that became the Attleborough bricklayer, and the victualler of ﻿The Grapes Inn﻿, that was held up at gun point in 1879.  My 2nd great grandfather, and another story.