Above map modified from "© OpenStreetMap contributors".  The red dots represent baptisms of BROOKER (including derivations such as Broker, Brocker, etc) between 1550 and 1600.  The larger the red dots, the more baptisms in that parish.

The area focuses on South-East England.  There was also a secondary cluster in Warwickshire, and stray families in Manchester, Yorkshire, Devon, and Norfolk.  However, I have not catered for all of those on the above map.  See the below larger scale map for Brooker baptism counts in those areas by county.

The Blue dots and notes mark ancestral birthplaces and dates of my recorded surname ancestors in Berkshire, Oxfordshire, and Deptford, London.  My line traces back reasonably securely to a John Brooker born at Long Wittenham, Berkshire, circa 1722.

The Purple dot and text represents Thomas Chandler of Basingstoke, Hampshire.  Living there circa 1740's, he appears to have shared my Y-DNA markers L-SK1414 judging by some of his Chandler surname descendants that have tested.  At some point before 1722, we must have shared Y line (paternal) ancestors.

From this map I can conclude that during the late 16th Century, the BROOKER surname was most common in Sussex, Kent, Surrey, and Hampshire.  There was a secondary cluster in Warwickshire. 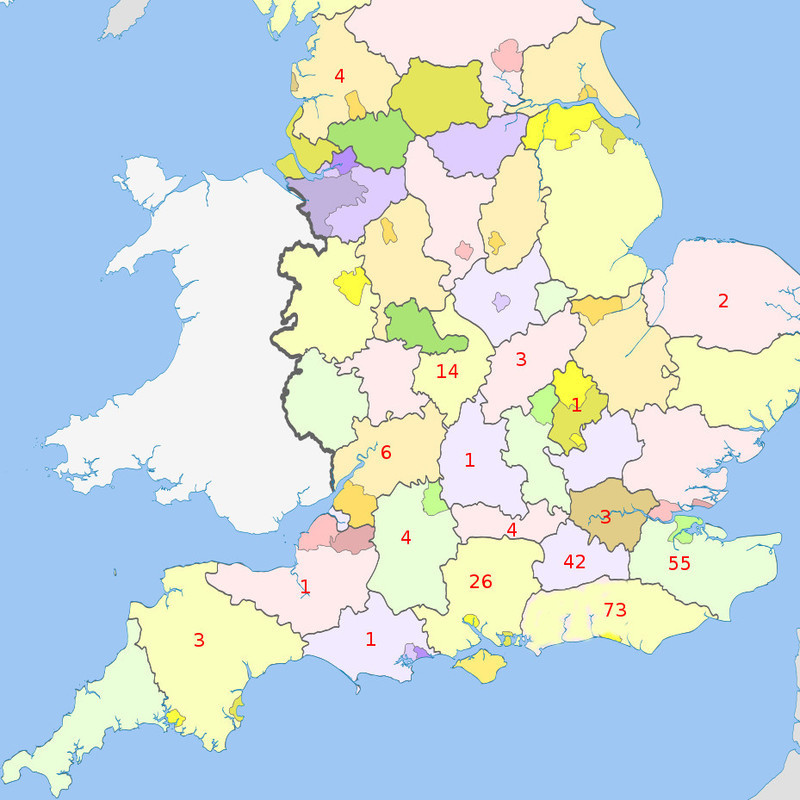 This interesting surname derives from two possible origins. Firstly it may be of English topographical origin from the Old English word "broc", a brook, stream, plus the agent suffix "-er", used to describe a dweller at, hence "dweller at the brook". There is also a place called Brook in Kent and Wiltshire, from the same Old English word "broc" as above. Also the name may be an occupational name used to denote a broker, originating from the Anglo-French word "brocour", one who sells an agent in business transactions. The earliest recordings of the surname appear in the 13th Century (see below). John le Brouker was recorded in the 1327, Subsidy Rolls of Sussex. William le Brocker was listed in the 1326, Feet of fines Rolls. The Close Rolls in 1332, record a Elena Brocker. Kirby's Quest for Somerset recorded an Adam Brocker in 1328. Geoffrey Broker, aged 17, an immigrant to the New World, sailed aboard the "Merchant's Hope", bound for Virginia in July 1635. The first recorded spelling of the family name is shown to be that of William Brokere, which was dated 1296, Subsidy Rolls of Sussex, during the reign of King Edward 1, "The Hammer of the Scots", 1272 - 1307. Surnames became necessary when governments introduced personal taxation. In England this was known as Poll Tax. Throughout the centuries, surnames in every country have continued to "develop" often leading to astonishing variants of the original spelling.


A weakness with the data will be that the sources may be selective and biased, due to incomplete transcripts, register survivals, etc.  However, it gives me an indication of just where my surname may have originated before John Brooker married Mary Gardiner at Oxford College chapel, on the 1st November 1746.  They were recorded as residing at Long Wittenham, Berkshire.  Mary Gardiner appears to have hailed originally from a family a few miles to the south of Wittenham, at East Hagbourne in Berkshire.  I also found families of Brooker in that same parish, including a suitable John Brooker candidate born in 1722.  However, on reflection, and in discussion with another researcher that also claims descent from the Hagbourne John Brooker, I decided to delete that connection.  Hagbourne John Brooker married another woman, not Mary Gardiner, and did not move to Long Wittenham.
I then chose the next best candidate.  Further afield, a John Brooker born 1722 at Chieveley in Berkshire.  I have to confess a bias to that direction as it lead towards Basingstoke (I'll get back to that further down).  However, once again, I can see evidence to eliminate him.  I need to consider another John Brooker at Oxford next.  So many John Brookers!
Why am I looking for a link to Basingstoke?  Because several people that have tested their Y chromosome DNA with Family Tree DNA, appear to have the same Y DNA data as myself.  Incredibly rare, and hailing from Western Asia, L-SK1414.  These several other testers are all from the paternal surname Chandler.  They form a small but distinct cluster in the Chandler Surname Y-DNA projects, very distinct from other Y-DNA in the group.  Some of them have traced their surname lines to a Thomas Chandler, that lived at Basingstoke early to mid 1700s, the same time as my 6 x great grandfather, John Brooker that married Mary Gardiner and settled at Long wittenham.  Basingstoke is about 32 miles south east of Long Wittenham as the crow flies.
At some point, the Y-line descendants of Thomas Chandler, and myself, must have shared a common Y grandfather.  Some point most likely between 2,000 years ago, and 400 years ago, and most likely, in Southern England.  Convenient for the Coast and for ports that our Asian Y ancestor may have arrived at by vessel.  Most likely I feel, in the Sussex or Hampshire region.  Look at the clusters in the top map around Southampton, Chichester, and Brighton during the 16th Century.
That I haven't found many Berkshire, and only one Oxfordshire Brooker baptism between 1550 and 1600 could suggest that my surname most likely trails down through Hampshire between 1600 and 1746.  There is always however, the possibilty of a relationship in the other direction to the Gloucester cluster.  That goes against the Basingstoke Y hypothesis, but it is a possibility.  Where did the Gloucester cluster originate?  For that matter, where did the more significant Warwickshire cluster originate?  Did it move there from South East England during the medieval, or does it converge from an independent surname origin?
If the surname line is still true to my Y-DNA at Generation 9 (John Brooker of Long wittenham), and the existence of the Chandler L-SK1414 does support that my Y-DNA most likely would have been in that part of Southern England at that time, then just when did the Brooker and Chandler families last share a common Y-DNA father?  The convergence could be the result of a non parental event in either direction.  Even a series of non parental events.  Alternatively, it could predate the emergence of peasantry surnames during the 14th Century.  The above quote from the surname website suggests some aristocracy were using the surname as early as AD 1296.  However, many peasant and commoner families would have been slower at adopting a surname. 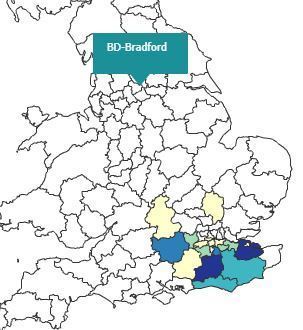 Modified from PublicProfiler.org.  © All Rights Reserved
1998 of Brooker

Modified from PublicProfiler.org.  © All Rights Reserved


But for now, I'm stuck at that marriage in 1746.  Therefore I'm launching a longer term surname research project, starting with collecting baptisms of Brooker, Brocker, Broker, Browker, etc. Between 1550 to 1600, and then moving forward.  Screenshots of my baby database below: 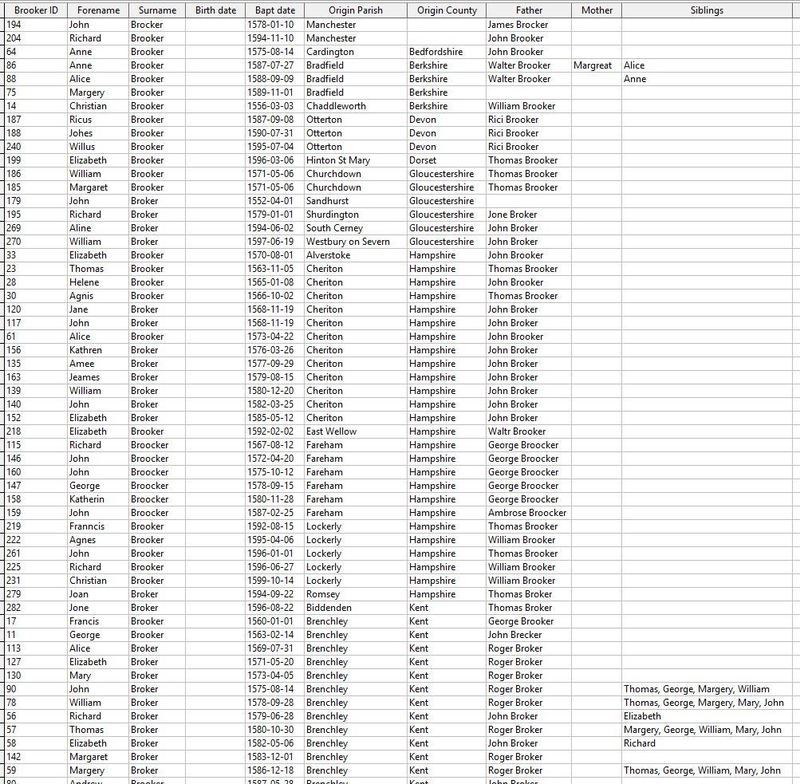 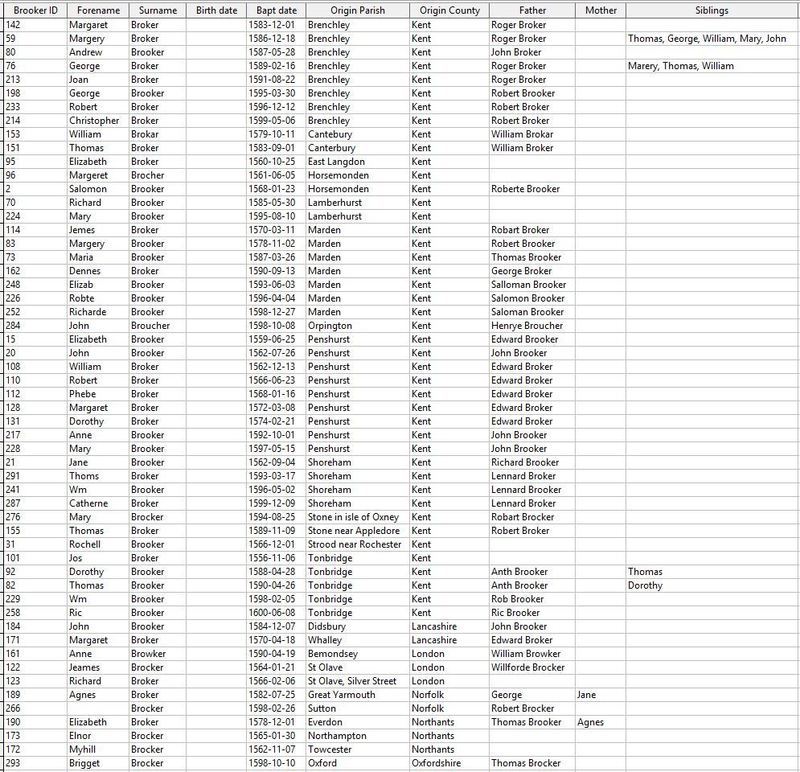 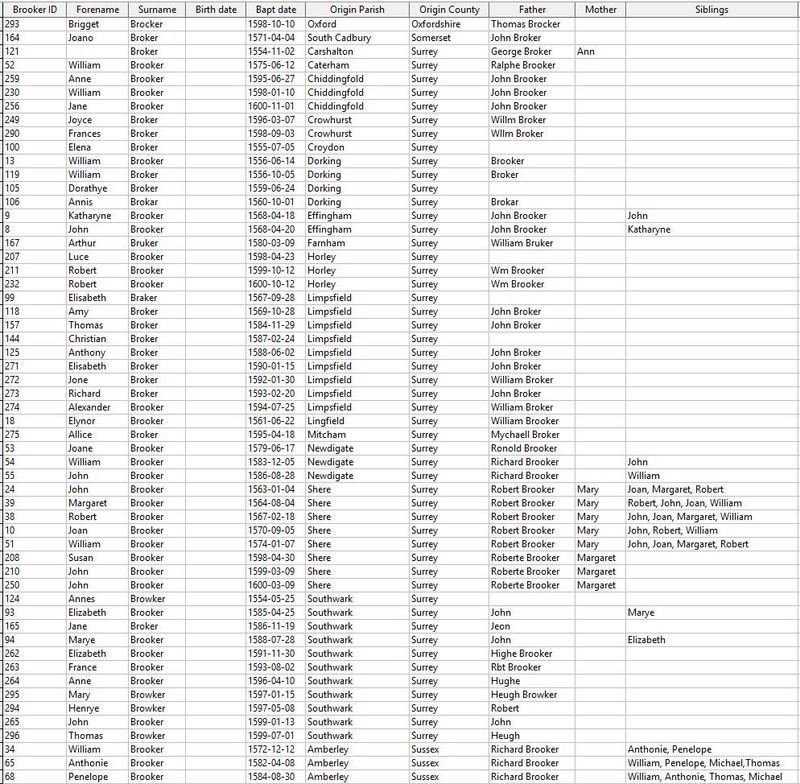 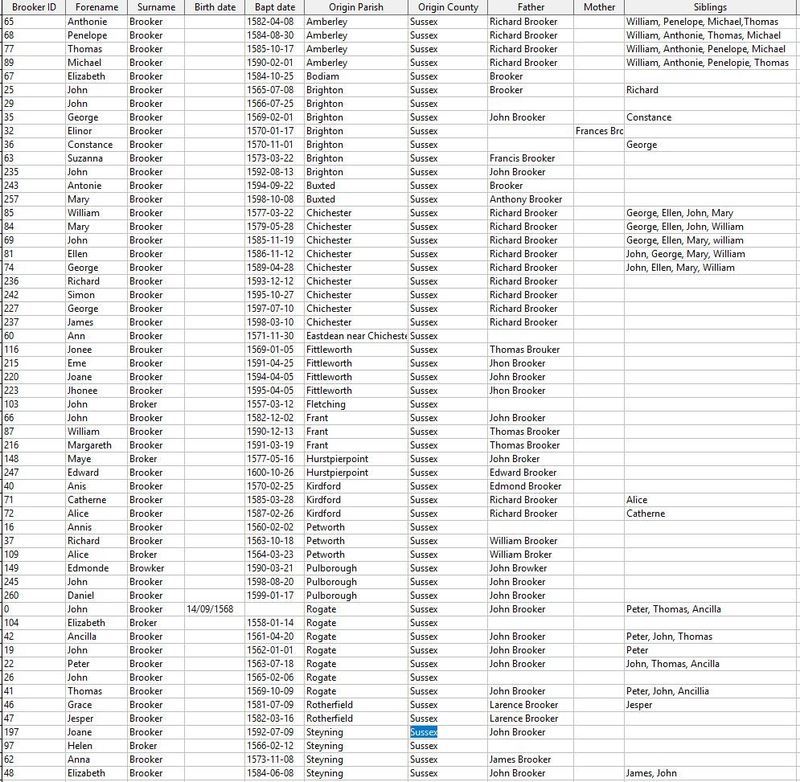 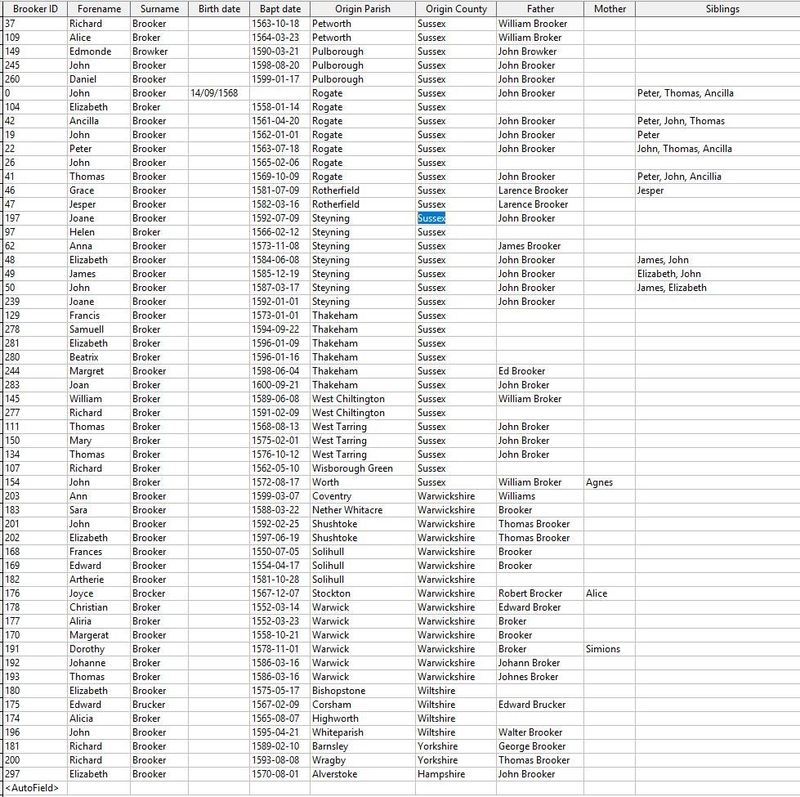