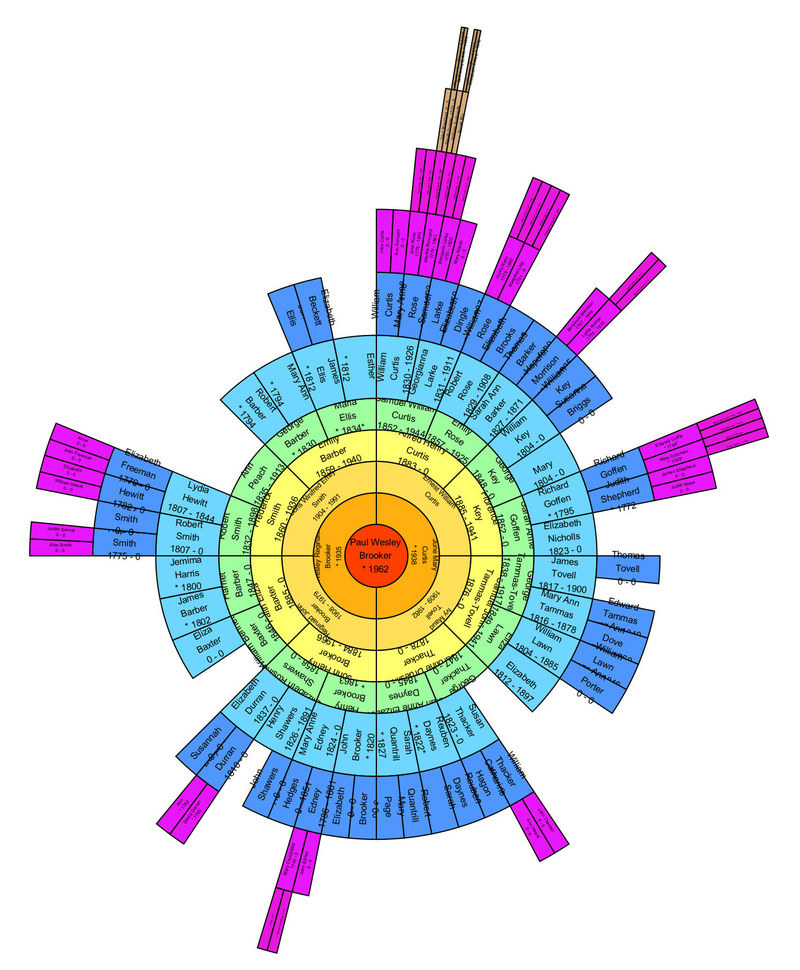 My direct ancestry fan chart looked a little bit too uneven (the above chart is the improved chart, after the following research).  I had compiled no ancestry for one of my great grandparents - my father's maternal grandmother, Emily Smith (nee Barber).  All that I knew of her origin, was that although she married and settled with my great grandfather, in Norwich, that she was born in 1859 in the South Norfolk village of Hedenham.  For some reason, perhaps a lack of resources back then (I conducted most of my family history 20 - 15 years ago pre-Internet), I had never traced any further back on her line.  My Ancestry Fan Chart highlighted this Gap of data.

I haven't really got the time to travel over to Norfolk Record Office at the moment, but I did have the recent opportunity to spend several hours online.  Internet Genealogy can be a bit pricey though.  Someone has to gain access to records, digitalise them, index them.  This service is provided by a number of commercial website companies, but of course, they have paid subscriptions.  I guess that if I was to start genealogy afresh, that I might be tempted to invest in an annual subscription with one of those companies.  If I didn't live in the country of my ancestry, then even more so.  As it is, I'm lucky, as the vast majority of my ancestry over the past three or four hundred years appears to be quite local, so that I can easily visit local archives and church yards.

So how did I get on with my Free Internet Genealogy Experiment with great grandmother Emily Smith (nee Barber)?

Conclusion - the story that I uncovered

This is a story of three generations of rural working class families, in South Norfolk, and just over the border in NE Suffolk.

On the 16th September, 1794, John Ellis married Elizabeth Beckett at the parish of Tasburgh in South Norfolk.  They were G.G.G.G grandparents of myself.  Tasburgh is a small village that straddles an old Roman road.  The couple then settled in the neighbouring parish of Saxlingham-Nethergate.  Their first two children, John, and Elizabeth, were baptised there.

Sometime around 1796, they moved slightly to the south, to the parish of Hempnall, Norfolk.  They settled there for may years, and Elizabeth gave birth to a further nine children by 1818, at Hempnall.  One of those was my G.G.G grandfather, James Ellis, who was born on the 16th April 1812, and was baptised shortly after at the parish church of Hempnall. At least one of the baptisms recorded that the father, John Ellis, was employed as a labourer - as with most rural working class men, he was an agricultural labourer.

G.G.G grandfather James Ellis, grew up to marry a woman named Esther.  They eventually settled in Esther's parish of birth - a few miles to the east of Hempnall, in the village of Hedenham, Norfolk.  However, at first, they may have spent some time even further east, in the village of Ditchingham, Norfolk.  They first had two daughters, including my G.G grandmother, Maria Ellis, who was baptised at Hedenham on 29th September 1834.  But in 1838, they had a son named Benjamin, who was baptised at nearby Ditchingham.  All later children - six of them, between 1841 and 1850, were born at Hedenham again.  During both the 1841 and 1851 censuses, the Ellis family were recorded as living in Hedenham.  James was recorded as working as an agricultural labourer in 1851, as was his twelve year old son Benjamin.

Now let's just step away from the Ellis family for a moment, and look at another ancestral family, the Barbers, living at this time, just over the county border to the south, in a little hamlet of South Elmham, named St Michaels.

G.G.G grandparents Robert and Mary Ann Barber, were both born in the county of Suffolk sometime around 1794.  They were raising a family in St Michaels, Suffolk.  Between 1818, and 1841, I found records of at least eight of their children, all born in St Michaels, S.Elmham.  One of them was my G.G grandfather George Barber, who was born in 1830.  During the 1841 census, eleven year old George was living with his parents and siblings in St Michaels.

Then something went wrong.  Perhaps the father, Robert Barber, died.  Perhaps they fell into extreme poverty, or even an illness struck the family.  With very little welfare, such events were often a tragedy to 19th Century rural working class families.  After 1841, the family disappear.  I lose trace of Robert and Mary Ann Barber.  Instead, in 1851, I find my twenty year old G.G grandfather, George Barber, is humiliated as an inmate of Shipmeadow Workhouse - the Union workhouse of the Wangford Poor Law Union.  Meanwhile, his thirteen year old younger brother, and nine year old younger sister are recorded as lodging with the Wigg family household in St Michaels.

Back over with the Ellis's, also in 1851, my G.G grandmother Maria Ellis was recorded as working as a live in servant in a household of the Buck family in Hedenham, Norfolk.

G.G Grandparents George and Maria Barber (nee Ellis) settled in the brides home parish of Hedenham, Norfolk, where between 1858 and 1868, they reared four daughters, including my great grandmother Emily Barber, who was born at Hedenham in 1859.  George's occupation was recorded again, as agricultural labourer.

During the 1861 census, the family are living at Old Gravel Pit, in Woodton, Norfolk - close to Hedenham.  Emily was aged one.

During the 1871 census, Emily, age now eleven, had a recorded occupation - Crow Keeper, which I understand to mean that she earned money for scaring birds from the fields.

However, by 1881, Emily had left her family, and had moved to the City.  She was now recorded as living at The Chantry, St Stephens, Norwich where she worked as a domestic servant for a John Rayner (a solicitor's clerk), and his family.  Emily most likely met my great grandfather Frederick Smith in Norwich, where they married sometime between 1881 and 1884, and proceeded to raise their own family, including my paternal grandmother, Doris Smith.

So how did I piece that together from free online research?  I added three generations to Emily's line, and extended that section of my ancestry fan chart without even leaving home, or paying a penny.  I made a story, I found probable tragedy, encountered some large families, identified their class, added new locations to my ancestry, such as Tasburgh - and even my first ever discovered ancestors from over the county border into Suffolk.  I found that my great grandmother (I'll borrow a photograph to scan later) Emily Smith, earned money as a girl, working as a Crow Keeper!

The main source was Family Search, the genealogical website hosted by the Church of the Latter Day Saints.  This is a cracking free website.  On it I could find and search a database of UK censuses from between 1841 and 1911.  This enabled me for example, to locate a few ancestors locations when otherwise they would have been missing.  The website also has an impressive database of transcribed parish registers and Bishops transcripts.  In some cases, the original documents were also available as digitilised images.  The search facility for all of their documents took a little getting use to, in order to get the best out of it, but what a free service!

Another useful website was FreeBMD.  This database was critical in tracing and confirming the marriage of George Barber to Maria Ellis in 1858. Although it only gives access to the indexes of state birth, marriages, and deaths, that along with correlations through the search facility of FamilySearch.org gave me enough information for that event.

Finally, in a search like this - you have to use Google Maps, in order to get a picture of where your ancestors lived, use Street View to see them, and the maps to see exactly where the parishes are in relation to each other.