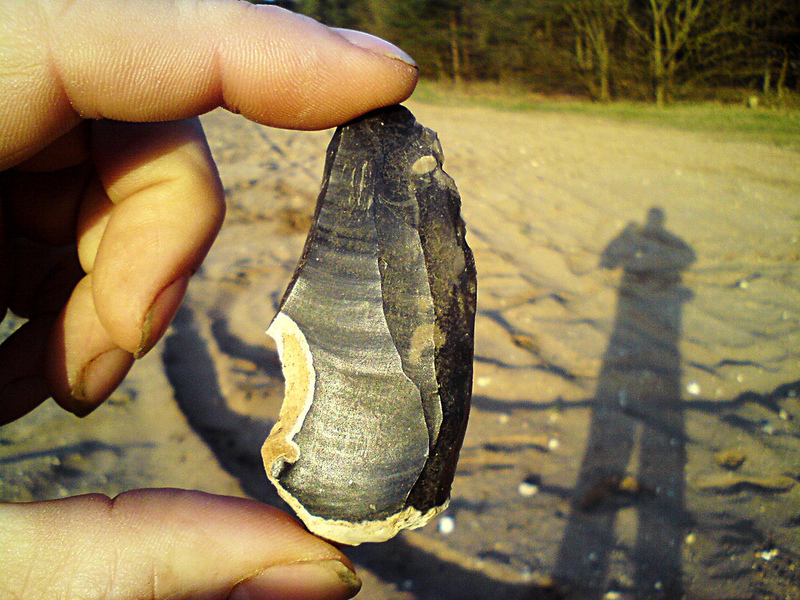 I took the above photo using an old digital cam phone, a Sony Ericsson C510, at Two Mile Bottom, Thetford, in 2010.  I was on a run with my old dogs across Thetford Forest, when I couldn't resist picking up this flake of flint laying in the sand, and taking this photo.  It was struck by a human knapper sometime in late prehistory.  I would see flakes of flint like this laying on the soils and sands of the forest all of the time.  After taking this photo, I returned it back to the sand.

I can remember as a boy, I was always attracted to the distant past.  I find it strange that some others have no interest in it, but then again, some people find it odd that I have no interest for example, in football.  Horses for courses.  I remember when my father's shop in the City of Norwich during the 1970's seemed surrounded by archaeological digs, and how I would leer through the fences at their excavation trenches.  My life didn't go that way though, I drifted into adulthood away from any future in the heritage business.
Years later, a few events.  The first occurred when I was around twenty years old.  I visited Ireland for a fishing, photography, and drinking holiday with my big brother.  Besides the Guinness and Irish whisky, I remember being deeply impressed by a visit to the Newgrange passage grave.  Deeply impressed.  I was struck by the engineering of the stones, how they managed to perfectly direct a shaft of light into the burial chamber, that would illuminate it on Solstice, when the Sun aligned perfectly. An American tourist in bright checkered shorts, also on the tour, was not so impressed, and loudly complained about the entry fee.  Horses for courses.
Second event.  I was now a young married agricultural worker, living in a farm cottage in Norfolk.  Walking our collie dog around the local fields one day, and I spotted a large stone on the ground.  It may have fallen off a recent hoe or plough.  I took it to the local museum, and they confirmed, it was the broken butt end of a Neolithic polished flint stone axe head. 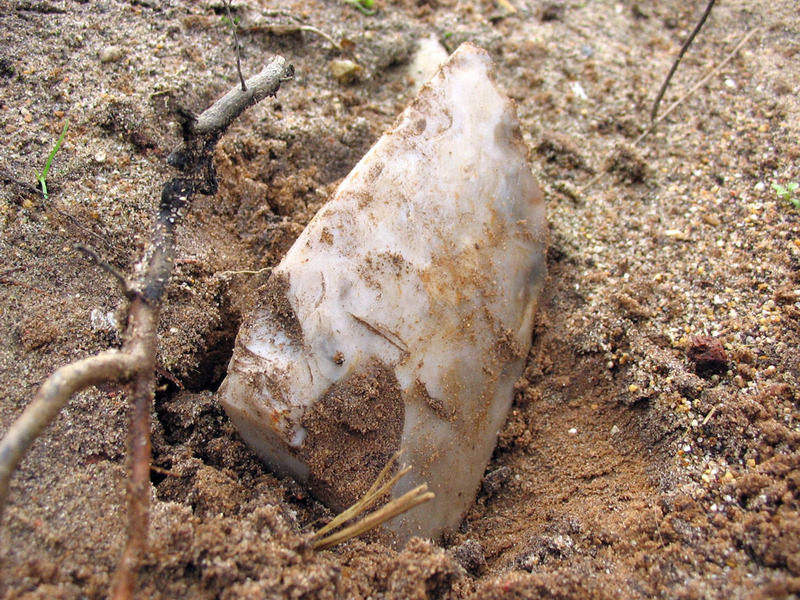 At the time I was becoming increasingly involved in local politics, and other than occasionally browsing second hand bookshops for books on British Archaeology, I didn't take it any further.  However, in time, the politics all went sour, and I felt that I didn't want contact from people anymore.  It was easier to deal with long dead people.  I started looking for more flint artifacts.  I started identifying flakes, found some beautiful scrapers and piercers, treasured flint arrowheads.  I didn't want to become a collector though.  I wanted to do something more justifiable.  I started to search for unrecorded archaeological "sites" in Thetford Forest, and to submit them to the local government archaeologists for recording onto their sites & monuments records.  I signed up for a two year extra-mural course in Field Archaeology and Landscape History with the UEA.

In 1997 I launched the Thetford Forest Archaeology project, a one man archaeological survey of disturbed soils in Thetford Forest.  I received support from the archaeology departments of Suffolk County Council, Norfolk County Council, and the local officers of the Forestry Commission.  I was supplied with maps each year, of the forestry compartments that were being felled and restocked.  During the restocking operation, the surface would be broken.  I would survey some of these compartments, and record the potential presence of any archaeological sites, such as clusters of artifacts, or earthworks.  More than that, and this was my own take on it, I would carefully measure and calculate the percentages of different artifacts in each area.  These artifact types consisted of late prehistoric lithics (human struck stone) by type, as well as the presence and densities of Roman and Medieval potsherds.
Here is a gallery of images from my original Thetford Forest Archaeology website. 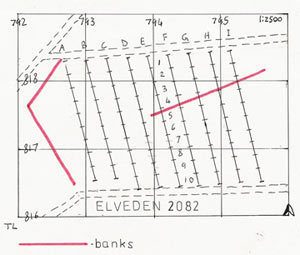 The above gallery is quite important to me.  Like a fool, I used a web host that deleted my website, when I failed one year to subscribe.  I had also lost my back up.  This is why the Posthaven policy attracted me here.  The majority of my old Thetford Forest Archaeology website can still be seen, using the wonderful Internet Archive Wayback Machine, that captured several sweeps of the website around 2006.  Link to the archived Thetford Forest Archaeology website here!
Getting back to survey, and what I was trying to accomplish:  Using spreadsheets, and very carefully mapping my surveyed areas (I was proud that I could provenance each find within ten metres using the National Grid Reference system), I would collate data such as the following example, from each survey:

A few sherds of pottery, including one of Middle Saxon date, were collected here during an earthwork survey by Brian Cushion for the Forestry Commission. It was felt that the com­partment deserved a closer look.

I was interested in percentages, landscape facets, distance to known water supply, etc.  It all seemed so nerdy, that I don't think that my liaisons in local archaeology departments ever really got what I was doing.  I was just starting to see some relationships between certain landscapes (such as river terraces), and certain types of lithics.  I was mapping the huge clusters of lithics between the Grimes Graves site and the river Little Ouse, I was mapping areas of previous cultivation, dating to the Romano-British periods, and the Medieval periods, based on densities of potsherds from those periods.
I don't think that all of the local archaeologists were ready for my sort of survey, they didn't know how to handle me.  They were much more use to metal detector find identification.  Anyway, after a mere forty one surveys, I petered out, and the project died.  A shame really, I was just starting to experiment with using GPS and in totally non-invasive surveying, that used very minimal sample removal, but digital images in the field instead.  I'm afraid that I engaged in abit of a slanging match with a member of Norfolk Archaeology in a popular archaeology magazine, then couldn't be doing with it anymore.  Anyway, I was ready to start dealing with living people again.
That was my amateur archaeology phase.
views