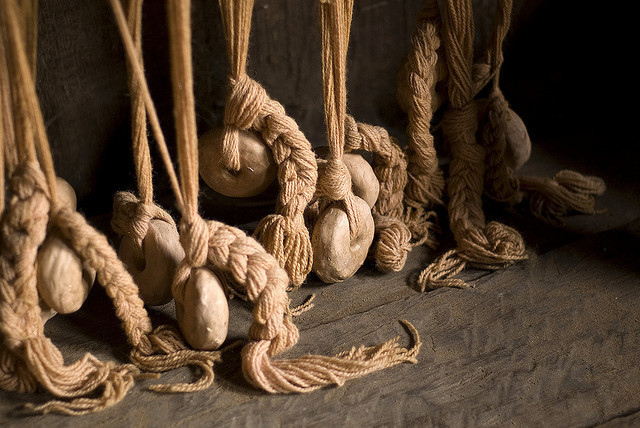 The above image, captured on a Pentax K110D and Pentax-M 50mm f/1.7 lens.  Loom weights in the West Stow Anglo-Saxon reconstruction village.

Literally, as soon as I posted my There was no British Genocide article, I come across links to yet a newer study.  Dr Stephan Schiffels of the Max Planck Institute for the Science of Human History in Germany, sequenced genomes of human remains from Hinxton, Saffron Walden, Linton and Oakington - all close to Cambridge.

The dates of the remains ranged from the Late Iron Age, until the Middle Saxon.  The team reported that:

"In the cemetery at Oakington we see evidence even in the early Anglo-Saxon period for a genetically mixed but culturally Anglo-Saxon community, in contrast to claims for strong segregation between newcomers and indigenous peoples. The genomes of two sequenced individuals (O1 and O2) are consistent with them being of recent immigrant origin, from a source population close to modern Dutch, one was genetically similar to native Iron Age samples (O4), and the fourth was consistent with being an admixed individual (O3), indicating interbreeding. Despite this, their graves were conspicuously similar, with all four individuals buried in flexed position, and with similar grave furnishing. Interestingly the wealthiest grave, with a large cruciform brooch, belonged to the individual of native British ancestry (O4), and the individual without grave goods was one of the two genetically ‘foreign’ ones (O2), an observation consistent with isotope analysis at West Heslerton which suggests that new immigrants were frequently poorer".

Based on this study, the team proposed that the immigrant portion of English DNA lay around a third, or 20 - 40% of total.  Not so far from the findings of 10% to 40% by the POBA 2015 study.  The newer study though confirms that the populations appear to have mingled closely, and that people of Romano-British ancestry were quickly adopting an Anglo-Saxon identity.  It was a surprise to find that the higher status remains Anglo Saxon dressed remains were actually of local Romano-British heritage, while some of the poorest remains were immigrant Anglo-Saxons.

Based on comparative genetics, the team suggests the origins of the immigrant Anglo-Saxons were Denmark and the Netherlands.

Full story can be found published under Creative Commons in Nature here, and the BBC news release here.

So once again, the genetic analysis suggests that rather than an Anglo-Saxon invasion wiping out the Romano-Britons, that a series of immigrations - not outnumbering the locals, arrived, and apparently mingled in.  Around a third of the population were immigrant Anglo-Saxon from the Continent.  Even the higher status locals, were apparently copying the new Anglo-Saxon culture.

The ethnic English are a surprisingly homogeneous population, with roots here going back several thousand years.  Immigrations arrive, provide admixture, but are then absorbed.  That is who we are.  Bede exaggerated the genocide.