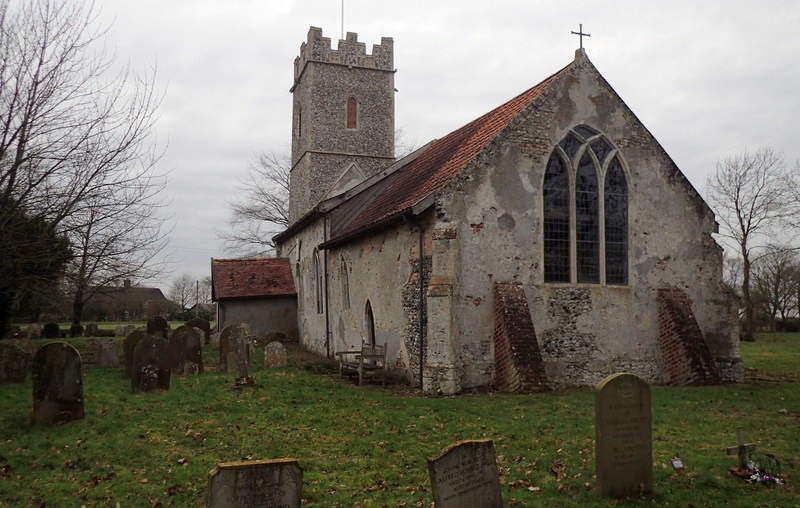 I also made contact via GEDmatch, with the owner of a sample that shares 56 centiMorgans of DNA with my sample, including a 27 centiMorgan segment.  It is all on my late father's side.  This is by far the most significant DNA match that I have yet encountered on GEDmatch.  Email correspondence with the owner (Margaret), revealed that we share a paper trail, with the Barber Family of St Michael.

The trail follows my father's maternal side.  His mother's mother, was born Emily Barber, at Hedenham, Norfolk in 1859.  Her father was George Barber, born at St Michael in 1830.  George was a son of Robert and Mary Ann Barber.  I thought that Robert was baptised nearby at Alburgh, Norfolk, the son of George and Hannah Barber (nee Blaxhall).  I thought that Mary Ann was baptised Maria Page, daughter of John and Mary Page (nee Brooks), and that she married Robert at All Saints, South Elmham, in 1828.

However, making contact with a DNA relative challenges an insecure tree.  Margaret pointed out a nearby Robert and Maria Barber family.  I started seeing more Robert Barbers, more Marys, More Marias.  Online digital records for Suffolk are not as good as they are for Norfolk. Confusion!  This is an example where Online Genealogy falls down.

So I checked with the Archive branch of the Suffolk Record Office had the original St Michael records - should no microfilms or fische be available.  They were over at Lowestoft.  Yesterday I drove over, to strike the iron while it was still hot.  I was quite pleased with the resources in the office.  I did not have an excuse to request the original registers - although digital is lacking, they have good copies on fische and film.  In addition, the Saints Villages of South Elmham had all been indexed and typed up by volunteers.  So what did I find? 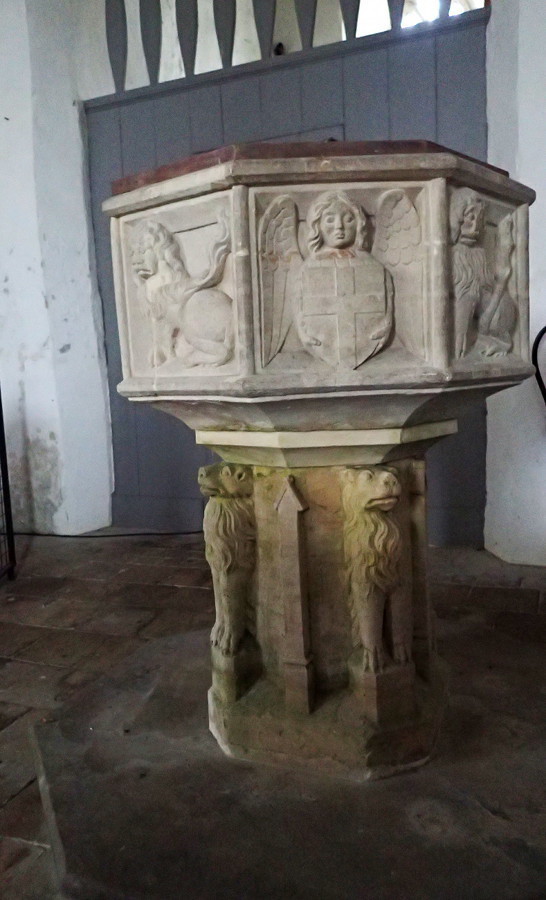 The baptism font in St Michael's, South Elmham, Suffolk, yesterday.  This would have been used in the below baptisms of ancestors.

There were a LOT of Barber families in the area, since the parish registers start in 1559.  The very earliest reference is to a baptism at St Michael's, of a Robert, son of Robert and Brigett Barber xxxi Auguste 1589.  A lot of sons born in St Michael alone during the following century - this was going to be difficult.  Indeed, in the St Michael registers, Barber entries continue on a regular basis until 1713.  Then a break!  No doubt there were a lot of Barber families living in the surrounding parishes and district, but the next St Michael Barber entries start with our family in 1818:

Maria is Margaret's ancestor, George is my ancestor.  I am a little confused as to why there might be two Jacob's, perhaps the first died, but I'm not sure.  I did find a later burial of a Jacob Barber age 23, who died after falling from a moving horse pulled wagon.  However, the clumsy genealogist in me didn't record the date!  Note also that the last two baptisms were joint.

I could not locate the marriage of Robert Barber to Mary (Ann).  This was a disappointment.  I did look through the other Saints Villages of South Elmham.  Neither did I find or confirm Robert's birth.  I had previously online found a baptism at Alburgh, Norfolk - a close by parish, just over the river.  however, as Robert claimed that he was born in Suffolk on the 1841 census, I have deleted that link from my tree.  Another case, where I lost more ancestors from the tree, than I gained from this research.  however, the point of genealogy is to improve and refine, based on evidence.

I do believe however, that I have located Robert's death.  I have also eliminated him as the transported Robert Barber of Suffolk.  I found the below burials:

The baby Robert, could have been Robert and Mary's.  The fifty year old Robert Barber, does look like my 3xgreat grandfather.  Indeed, it explains where he went between the 1841 and 1851 census.  He was not transported.  Checking Suffolk criminal records at the Record Office, I found that the 1844 sentence of a Robert Barber was over in West Suffolk, at Bury St Edmunds Assize.

I had jumped the gun again - based on the very partial online record.  I keep learning this lesson, but it should also serve as a lesson to genealogists abroad, that rely only on digitalised or transcribed records of English ancestors online.  What you are seeing is a partial record.  There can be so many John Smiths, or even Robert Barbers, in a small area. A visit to the County Archive (Record Office) revealed so many more records of Barbers in the South Elmham area, that cannot be seen online at Ancestry.com, FindMyPast.com, nor on FamilySearch.org.  Beware!  I see awful, incorrect family trees (not just my own ha ha), whenever I view personal online trees at Ancestry.com.

The Tovell Family of Wrentham, Suffolk

While I was at Lowestoft, I thought that I would take a quick look at another ancestral family of mine, local to this Archive.  The Tovell Family that lived at Wrentham, Suffolk, during the late 18th Century, and fall on to my mother's side of my family tree.  Although members of a local Congregationalist chapel, for some services, they referred to the local parish church.  It was in a transcript of those parish registers, that I found a number of burials of the children of my 4xgreat grandparents Tovell:

They went on to have a third son baptised Thomas Tovell in 1785, who was my ancestor.  Sometimes though, the infant mortality of those times can get to you.