I'm on a fresh family tree run.  Well, actually, this one I'm sort of restoring, after once trimming the branch out.  I found them a while ago, but then noticed that one baptism would have made the proposed mother around sixteen.  It can happen, but I don't see such young motherhood very often in my tree, so I cut a branch off.  When in doubt - cut it out.

The Moll family lived during the 18th century in Ranworth, and the neighbouring parish of South Walsham in glorious Norfolk.  Here's my Tracey on her phone earlier this year nearby at Ranworth Broad: 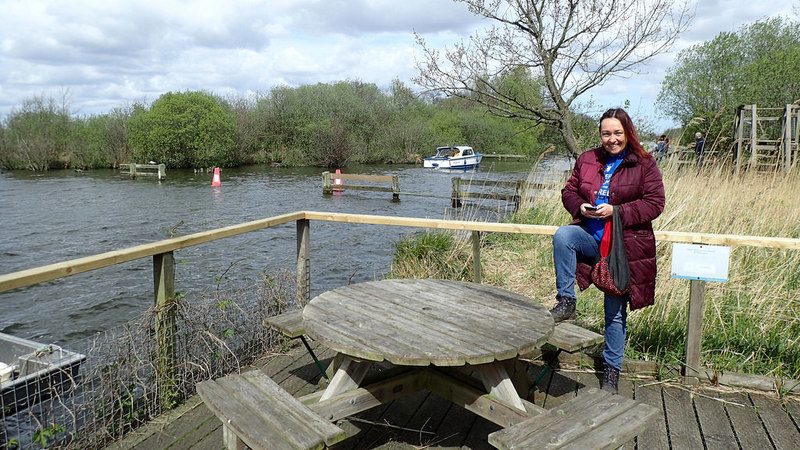 Isn't she lovely?  Getting back to the subject, a fresh look at the Moll Family using online genealogy, and I saw my mistake.  That early Moll baptism belonged to another mother / wife of the father, from an earlier marriage.  It all fit after all.

I descend from them through my maternal grandmother, born Ivy Tovell.  Let's start this time from the top, as far back as I can safely get on this line at the moment.

My 7th great grandfather Abraham Moll lived in the Norfolk parish of Ranworth.  Where was he born?  He couldn't have been the Abraham born at Hoveton, Norfolk in 1719.  He'd be too young.  He could have been the Abraham Moll born at Edingthorpe, Norfolk, in 1696.  Just the right age.  However, that's about 20 miles away.  Did people move that far back then?  Sure.  My Thacker family line for example, shifted around East Anglia.  But most in my experience did not.  Therefore I like more evidence before accepting an origin just like that.  When you go back much earlier than 1780, that extra quality evidence rapidly evaporates for the masses.  That is where many, many, online genealogists go wrong.  Particularly if they don't live locally, they just go for the nearest with the same name, and about the right date.  If I had done that, maybe I'd now be back to Charlemagne like they usually are.  But I wouldn't believe the pedigree.  They shouldn't either.

So the earliest record - the baptism of his, and his wife's son Abraham (junior) at Ranworth in 1728: 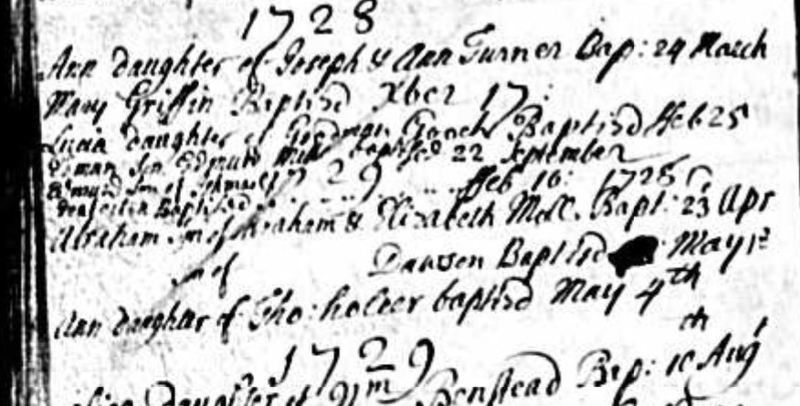 I then have baptisms at Ranworth for four more of their children, including my 6th great grandfather Solomon Moll.  The last record for Abraham (senior) though was his burial at Ranworth in 1745:

6th great grandfather Solomon Moll was quite interesting.  Born at Ranworth in 1731, rather than the usual agricultural labourer, he was a cordwainer (a shoe maker).  Over the years he apprenticed a number of young men in South Walsham, Norfolk, for example:

and she was to give birth to my 5th great grandmother Elizabeth Moll at South Walsham in 1763.

I don't know when Rebecca died, but widower Solomon married a second time in 1805, to a widow named Elizabeth Ebbage.  He must have been about 74 years old.  Good on him.  Maybe it was love.  Companionship at least. 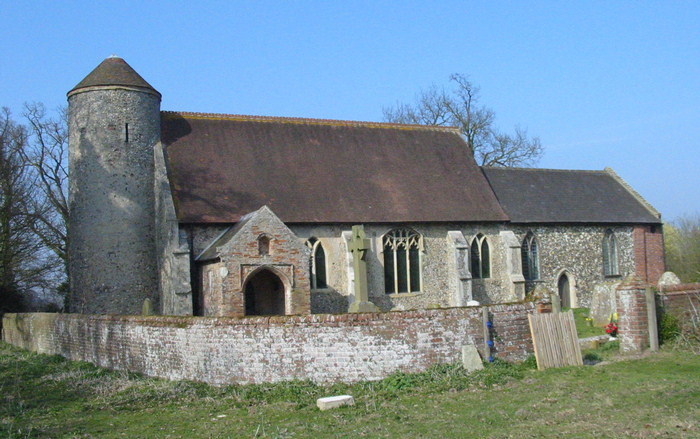 Moulton St Mary.  One of my favourite local rural churches.  The walls, exposed by conservation work are covered with medieval murals.

My 4th great grandmother Mary Wymer was born at Moulton, Norfolk in 1789.  She married a local farm worker named William Springall at nearby Halvergate (on the edge of the marshes) in 1811.  They had at least seven children at Halvergate between then and 1834.  One of them was my 3rd great grandmother Elizabeth Springall.  She married local lad William Lawn over the marshes at Great Yarmouth, Norfolk during 1831.  They settled at Tunstall, next to the marshes close to Halvergate.  William was interesting.  Although a marshman and labourer, he served as the parish clerk at Tunstall for 33 years. 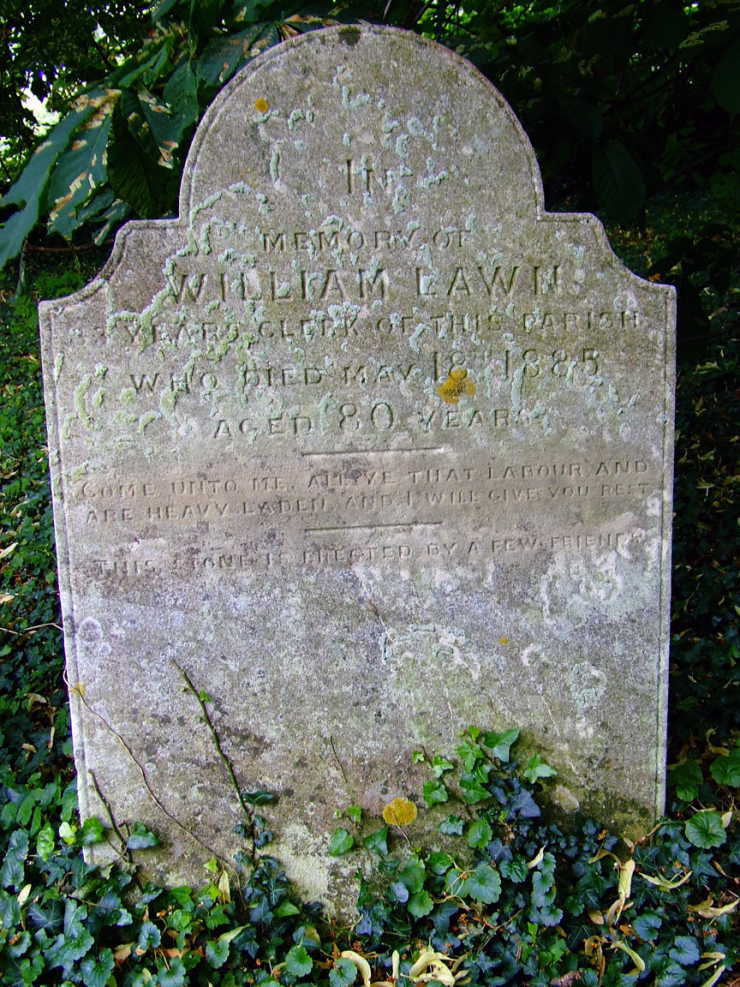 Here she is, the old lady sitting on the right of the photo: 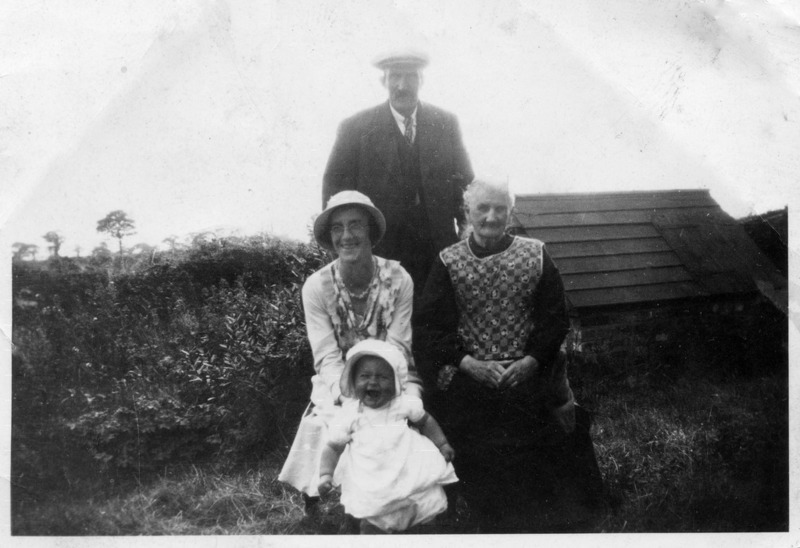 An interview with one of my late great aunts recalled that as an old lady, she'd sit long periods in front of a mirror, brushing her long grey hair.  In the above photo, she poses with her son, grandaughter, and great grandaughter, my mother's sister.  Probably taken at Halvergate or Reedham.

My Ancestry tree currently contains the records of 2,924 family members.  Including 328 direct ancestors for myself and my siblings.

I have 156 direct ancestors recorded for my father.

I have 170 direct ancestors recorded for my mother.

I have 490 direct ancestors recorded for my children. 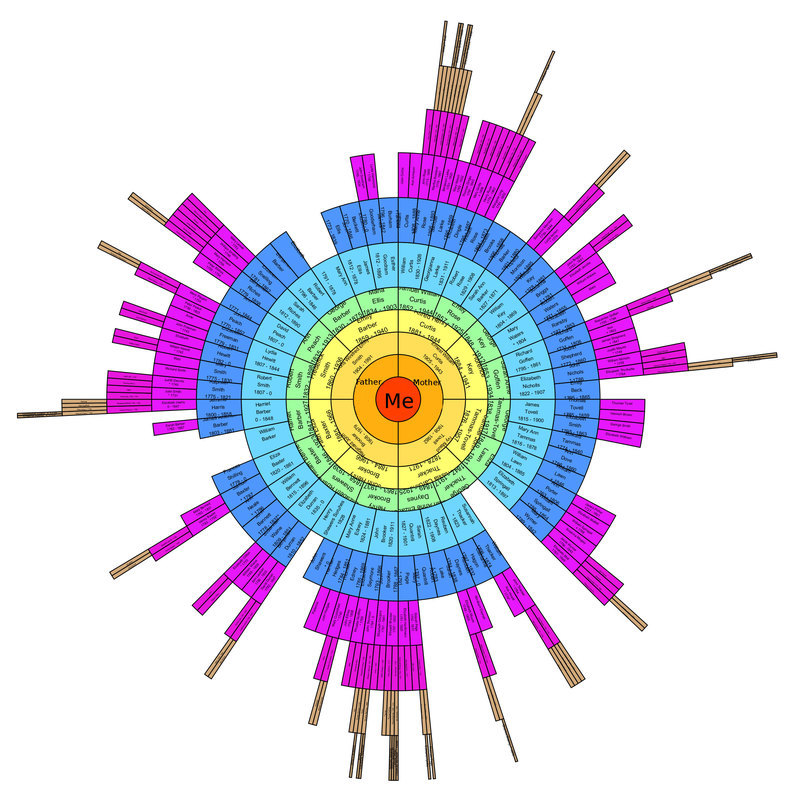