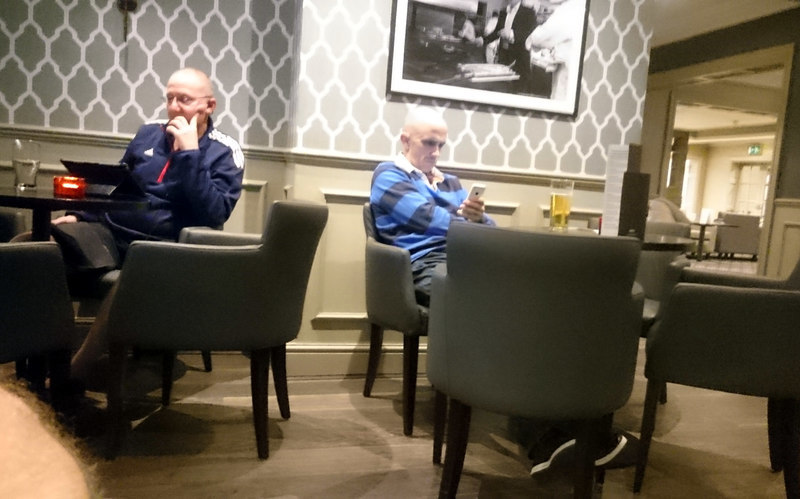 So here I am away from home on a training course.  Other professionals may recognise this world.  We are put up in hotels, where amongst families, couples, and holiday travellers, we spot the other delegates, reps, engineers, trainees, contractors and consultants of our kind - the workers.  Fitness wise, our stays in these places can be a mixed blessing.  Hotel gyms abound, but then we have to control our intake of restaurant nosh, and visits to the hotel bar.

I sneaked the above image on one such visit to the bar (I excused my sin on having run a virtual five miles earlier on a treadmill in the gym).  There were four people sitting near to the bar.  All men, on their own.

Back for example, during the 1970s, they would most likely sit right at the bar on the stools.  One might sit down reading a newspaper.  The others would have discussed world politics, or perhaps something mundane such as a sport.  The young bar staff would have politely smiled and tried to appear interested as they wished on closing time.  They would face each other, talk, converse, using words laden with accent that gave clues to their origin, background - something that others could pick up from, looking for a common interest or dialogue. They wouldn't have just communicated with words - they'll also talk with their facial expressions, postures, maybe even hands.  They'd talk with laughter, yawns, smiles, nods and frowns.

Now the 1970s may not be a good period to reflect on.  The conversation at times may well have been prejudiced, racist, or sexist - but it may well not have been.  At a bar it might have been between white middle aged men - but not always.

Time travel to the present.  Four customers at a bar.  Two of them  looking down at mobile phones.  The other two at Ipads.  They sit alone, facing away.  I sat there nearly an hour, not one word spoken.  No interaction within the room.  The only interaction perhaps taking place in a binary form across the hotel wifi.  This is the 21st Century.