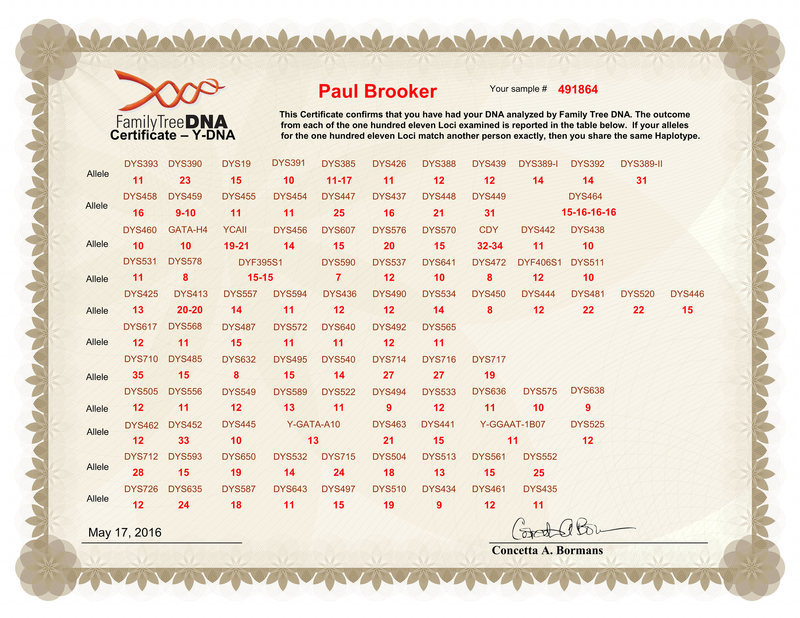 My Family Tree DNA Y111 STR test results are in.  Only yesterday, I predicted that ftDNA kit number 29369 could be of particular interest.  That prediction has now been proven correct.  Here is what I have learned since yesterday.

The 12 marker STR kit belonged to a descendant of a Thomas Chandler, that lived 1728 to 1782 at Basingstoke, Hampshire.  Although only 12 markers - it proved a perfect match for my first 12.  100%.  Family Tree DNA rated it's genetic distance as zero.

Basingstoke, Hampshire by modern road is only 32 miles (51 km) from Long Wittenham, Berkshire (now Oxon), where my surname ancestor, John Brooker lived, at the same time.  Based on the limitation of a 12 marker comparison, FTDNA give 71% confidence to the testers sharing a common Y ancestor within 12 generations, and 91% confidence of us sharing a common Y ancestor within 24 generations.  I'd say that suggests that myself and the present day descendant of Thomas Chandler, shared a common Y ancestral lineage until between circa 1500 and 1700.

So most likely, between the 16th and 17th centuries inclusive, the Y chromosome moved between two surnames, what we call an NPE (non parental event).  Usually either illegitimacy, where the Y-DNA detached from the surname of the biological father, or simply, the biological father of an ancestor, was not the husband of their mother.  This event most probably occurred in England, somewhere in the Hampshire, Berkshire, Oxfordshire area.  Both my Brooker lineage record, and the Chandler record, merge somewhere in that area.

It gets better.  Searches on FT-DNA, ySearch, and an email trail, revealed more Chandler Y cousins with an L haplogroup. All together, I have today found two 12 marker STR tests, that match my first 12 markers perfectly, with a prediction of zero genetic distance.  I have found another 12 marker with  slight difference, and a genetic distance of 1.  I have found a 37 marker test with some differences, but that still gives a genetic distance of 3.  A comparison with the Y37 test result, predicts 78% confidence of sharing a most recent common ancestor with me within 12 generations, and a 99% confidence of us sharing common Y descent within 24 generations.  This correlates quite nicely with the two perfect 12 marker testers.  All four testers are descended on the paternal line from Chandlers in the Basingstoke area.

The Chandlers of Basingstoke

The FT-DNA Chandler Surname Project is very well managed through the Chandler Family Association.  The three Y12 test kits, that hail from a Basingstoke ancestor, and have proven to belong to the exclusive L M20 Y-DNA haplogroup, have been clustered together as Chandler Group 10.  If our surname was Chandler, rather than Brooker, my Y111 results would fit perfectly into this cluster.  This is because we shared a common paternal lineage, until between 500 and 320 years ago.

That one has still to be answered.  I'll be consulting others, the Y haplogroup L project administrator, and looking forward to my Big Y test, which is scheduled to take place soon.  However, judging by how very few L-M317 Y haplogroup carriers have so far been recorded in the British Isles, or in North West Europe; I'd dare to propose that the common paternal ancestor of both lines, most likely had not been in England for very long.  Perhaps they could for have example, have carried the Y-DNA here as a 16th or 17th century protestant refugee?  Maybe not, they could have equally been a merchant, an artisan, a servant, a mercenary, or have arrived in another capacity - if indeed they did arrive here that recently.  There is no indication in neither the Brooker or Chandler surname of anything but a medieval English origin (unless originally Bruche, or Chandelier?).
If the common ancestor did arrive that late, where did he come from?  What modern population elsewhere most resembles his Y-DNA?  Hopefully, the Big Y test will help to answer that.  Meanwhile my untrained eyes see correlations within many of the STR markers of people that descend from the Pontic Greek community, that once lived in Eastern Anatolia, and around the Black Sea area of Western Asia.  Of course, the Y-DNA might not have been carried to Southern England from such a homeland within one generation.  It could have been?  There is no sign of any West Asian, Balkan, or Caucasus ancestry within my autosomal DNA.  However, even six to eight generations ago - that could be washed out through recombination - leaving only the Y-DNA to tell what would have otherwise remained a lost untold story.  However, it could have moved across via a number of generations.  It will be worth looking out for any evidence of this on results across the Continent.
See also my earlier posts: