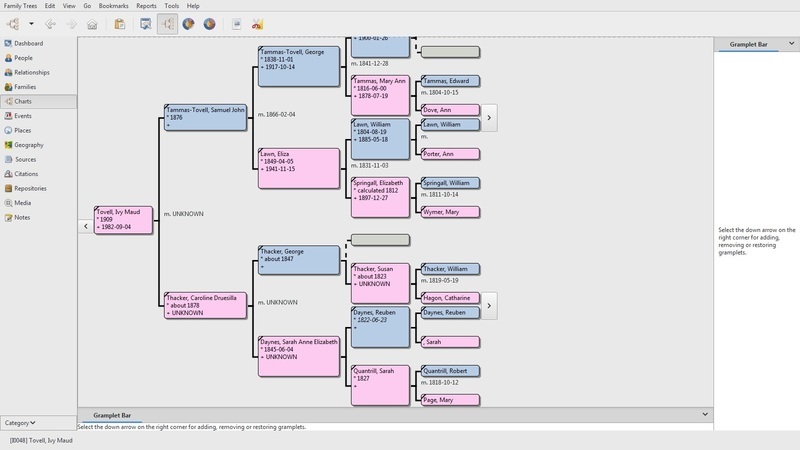 I first took an interest in genealogy around 1989.  My interest grew, as did my very badly kept scraps of notes.  During the following decade, a number of computer databases designed for genealogy came onto the market, but I could only afford a used 8 bit Amstrad  computer, and merely had to do with typing it all up on Locoscript word processor.  In 1998, I finally moved onto a Windows 3.1 PC.  I soon came across an early version of Family Tree Maker - perhaps version 3 or 4.  I had to install it using a pile of floppy disks!
I then used FTM to compile my family tree, complete with scanned photos.  I could use it to print trees, albeit only on A4 sheets.  I do wish that I had been more careful to conserve and record all of my sources back then.  I wasn't a very methodical researcher.  The program also allowed me to produce a GEDCOM file, which I could use on other genealogical databases, or, it promised, to share online, as soon as I had the ability to connect to this new Internet thingy.

I indeed upgraded to a Windows 98SE PC, and even, with a 56k modem, connected to the Internet.  I think that I bought a newer CD-ROM version of FTM.  One of my first actions on the Internet was to upload my .ged (GEDCOM) file.  I'm not too sure to who, what server, or what they did with my data.  I wasn't too wise about the commercialisation of the information super highway at that time.  It may have ended up with Ancestry.com enterprise, who no doubt have sold and resold it on.
Eventually my interest in genealogy drifted away.  Quake 3 Arena was much more fun than typing in ancestors to a database.  I did at some point around 2006, upload my gedcom to a web server, so that it could be downloaded from my own ancestry pages.  I eventually gave up that subscription.  Life moved on.  I went through family break up.  Lost all of my old poorly kept notes, my hard drives, everything.
Then a few months ago, I randomly decided to take a DNA test with 23andme.  My interest in my roots rekindled by the prospect of genetic ancestral profiling, I dug up my old ancestry pages from a web archive service, and was surprised to find that they had also archived my gedcom file.  I downloaded it.  Now I needed some software in order to open it.  I always look first for Open Source software.  I found Gramps 4.2. 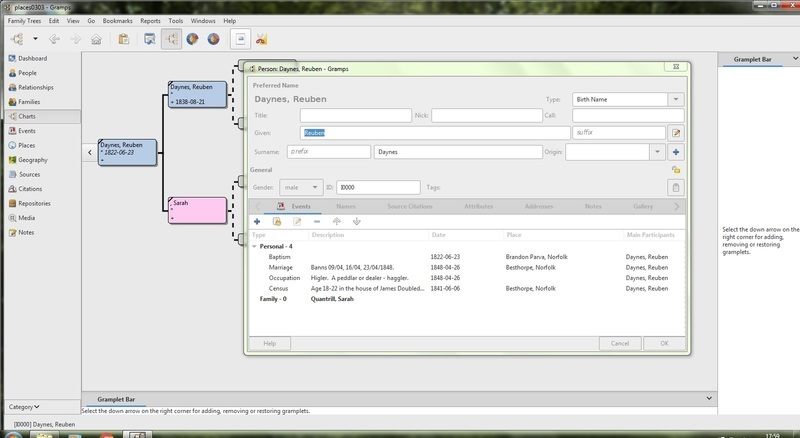 Gramps is available free, and Open Source on both Windows and on Linux.  It may be available for other platforms as well, I don't know.  I've installed Gramps 4.2 onto my Windows 7 64 bit PC.  I've also installed Gramps 4.0 onto my Lubuntu 14.04 (Linux) netbook.  The screenshots that I've uploaded to this post, were taken on the Windows PC.  There are differences between my two versions on two platforms, and I won't go into all of those.  I'm mainly interested in updating and generating .ged GEDCOM files, bearing in mind, my past experiences in losing data over the years.  As long as I don't faff around too much on attributes carried by Gramps native features, that are not carried over by the GEDCOM format, the programs both run great.  I haven't yet played too much with images.  My understanding is, that you need to host the binary files in folders on your hard drive - then GRAMPS  merely points / looks at them.  That isn't something (as I presently understand) that is supported under GEDCOM. 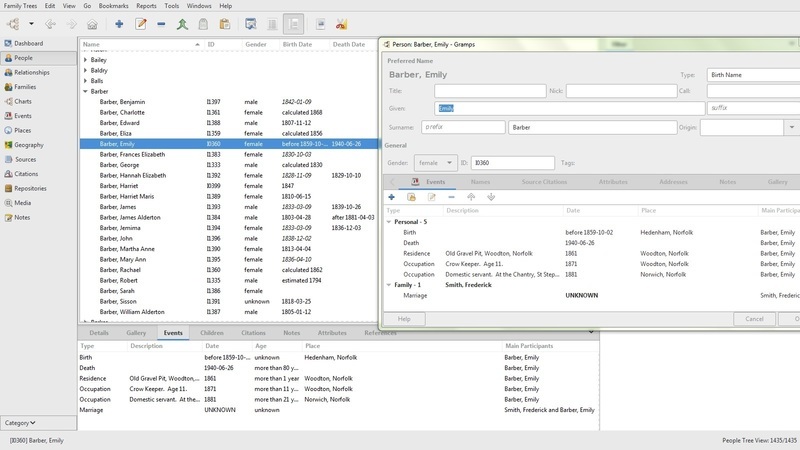 Gramps is a database.  Like any database, it revolves around objects, attributes, and tags.  Some glossy family history software might dumb all of this down a bit.  They want to catch the mass market.  Gramps does not shy away though.  It's real magic is that it offers so many different ways of entering data, in ways that can be tracked to resources, citations, notes, places, even coordinates.  It's a piece of free software that the geek genealogist should love.  Typical of Open Source, it is more functional than pretty.  It's a piece of software that can be daunting at first.  However, if you are methodical, and reasonably pooter-literate, give it a little perseverance, and you soon start to love it.  It's features will encourage tidiness and well documented research.  Why spend out on EULA licensed software?

This week, I've been investigating the Places objects.   I've discovered that you can geo-tag your places - that can be referenced to events, such as baptisms, deaths, census records, etc.  I must have hundreds of places for my family database of 1,435 ancestors / relations.  None-the-less, I've been spending too much time on the pooter, tidying up my place data, and by referring to OpenStreetMap.org, copy and pasting longitudes and latitudes into all of them, along with place-type, alternative names, etc.  It's all about making a better GEDCOM, a better family history database. 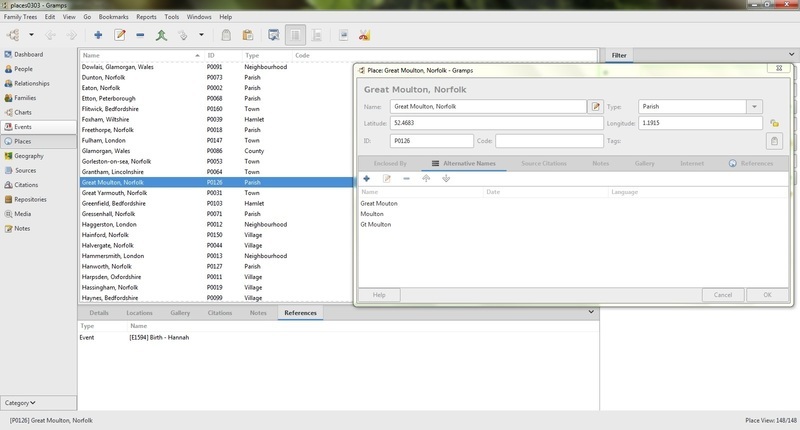 So why bother?  Well for one  it's going to be a vastly improved record of my family.  A healthy database.  Not only that, but GRAMPS allows me to plot my ancestors locations - or rather, the locations of "events": 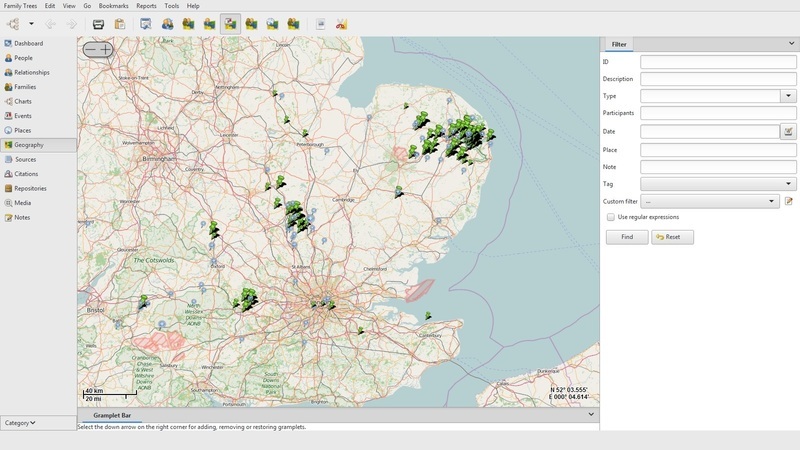 I can see at least one error there - in the sea off the Kent coast.  Some more tidying to do.  By the way - the mapped events include the paper ancestors on my kid's family tree, including those of my Ex.  Alternatively, I can browse the places, hit an option, and in a browser, up pops the location on OpenStreetMaps!

There are many more features to explore on Gramps.  I'll get to them in time.  I've uploaded several of the fancharts that it can generate already on this blog.  There are a range of other reports that it can produce, and web pages.  The generated website is incredibly functional.  It took a couple of minutes to generate pages for every one of my 1,435 family tree individuals.  All with trees galore.  All that I would need is a web host.

As for stability.  I've seen someone complain that it slows down.  Nonsense.  It's fine even with my extensive database.  My Windows version is very slow to launch though - not so the Linux version.  However, when it's up, even on Windows,, it is perfectly functional and very fast.

Some people are also confused on how to load a GEDCOM file at start.  I was.  It's simple.  You need to first create a blank family tree file from the manager.  Then you can import your GEDCOM into it.  You don't see the Import/Export functions until you have first loaded a family tree - just make it a new blank file.   Once you have created a family tree, and imported a GEDCOM - be careful to use that file next time, and not do as I did - import the GEDCOM again.  You'll end up with two of each individuals.  Always back up before and after making any edits.  I like to mail a backup to myself on webmail, so that the GEDCOM is also backed up on two webmail servers.

That geo data that I produced on Gramps, is carried over on GEDCOM to other databases and platforms.  I use the GEDexplorer v1.24 ap on my Android smartphone.  This app allows me to view my GEDCOM files on my phone!  It cost me a couple of quid from the Play Store, but it was money well spent. 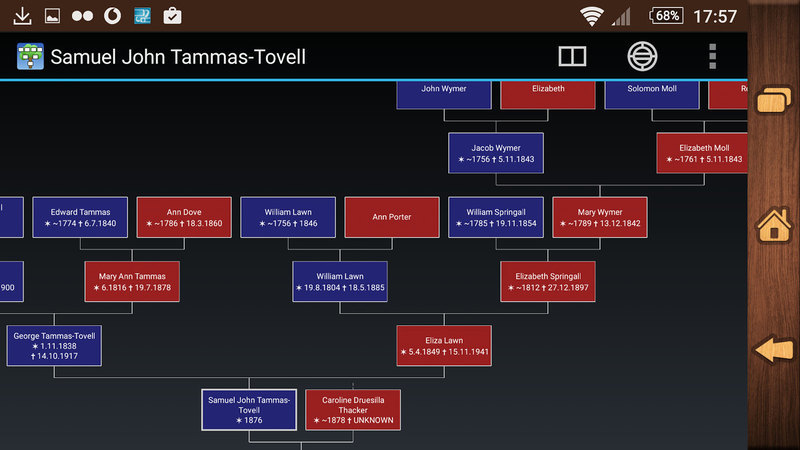 The above screenshot shows a view of one part of my tree - the ancestors of my great grandfather Sam.  It's a really nice feature of GEDCOM files and this software, that you can open up your database, look through trees, fan charts, or just the data itself, browsing through ancestors.  Handy if you just get a spare hour here or there to research with - but no lap top!  Easy quick reference of your entire database from a phone. 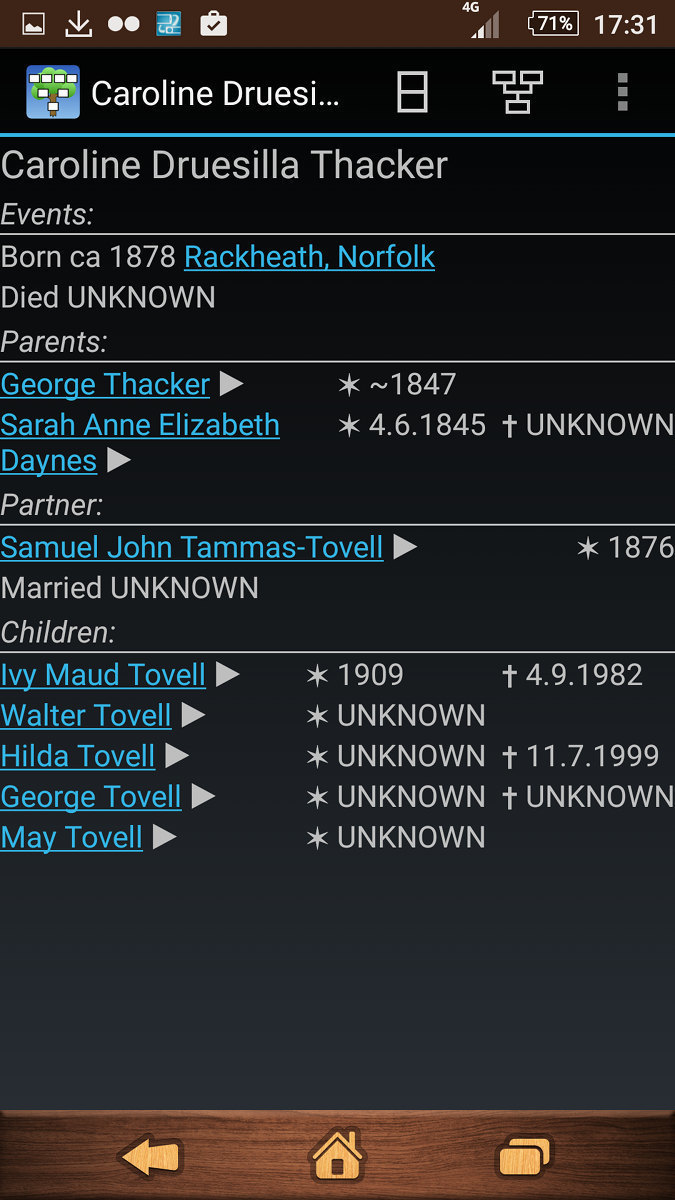 You see, it's all there.  The beauty of GEDCOM format has reached from my Windows 3.1 machine, to my Sony Z3 phone.  That's a rugged file format.

Now to the point of this entire post really.  Those hours that I've wasted away on giving geo-tag provenances to all of my ancestral places?  The GEDCOM picks up the latitude and longitudes, and GEDexplorer displays them.  Just click on any hyperlinked ancestral event place, such as my great grandmother's place of birth above, and .... 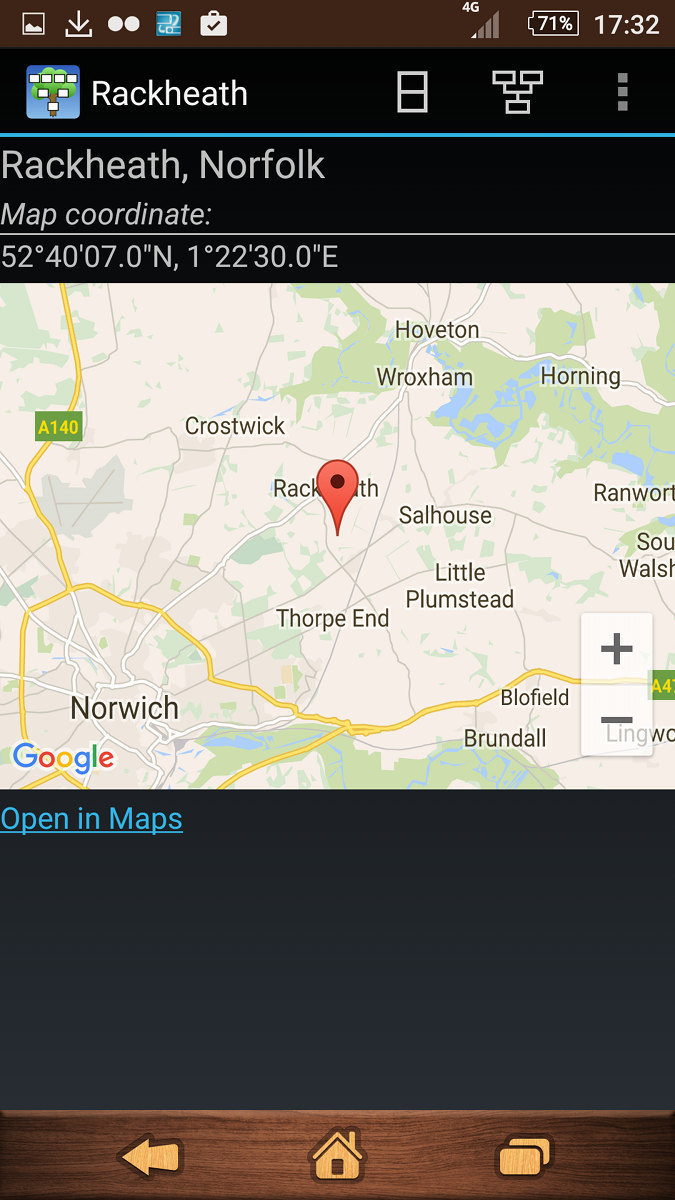 and I can hit the link and look at it in more detail using Google Maps.  Hell, I could even navigate to the actual place.