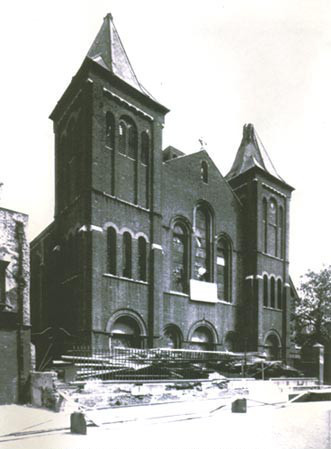 I've been researching my family history and genealogy, on and off for around 29 years.  I'm very pleased, that in the first few years, that I took the chance to interview elderly relatives that are no longer here to interview.  One of the stories that came out on my father's side, was that there was a "foreigner" in the tree.  One version said French, another said maybe Russian.  One late uncle even thought maybe German.  I hoped to find this exotic ancestry, and started to research documents.  I never found one non-English ancestor.  That is I hadn't ... until a few days ago!  He is on my father's side, a great great great grandfather of mine.

My 3 x great grandmother Elizabeth Shawers (later Elizabeth Hayes), was born at Deddington in Oxfordshire in 1835, the daughter of a tailor.  She was one of many rural Oxfordshire people that made the brave trip downstream into the growing 19th century metropolis of London.  She encountered Henry Shawers, a Harrow weaver.  I'm still trying to find out what that mean't, but Henry recorded Harrow weaver as his occupation more than once, as though it had a meaning to himself.  They married at St Philips, a poor East End of London church, built recently as a chapel-of-ease for St Matthews, in 1857.  Pictured at the top of this post.

So who was Henry Shawers?  My first clue, many years ago, was that his father was named John Shawers, who worked as a copper smith.  Other than that, I couldn't find them.  Before 1857, no trace of either Henry or his father.

Something really early in my research, I can't remember what, suggested Huguenot.  That feeling eventually faded away.  More recently, I wondered if he was connected to some Shawers at Cornwall, or to Shawers / Shores in Yorkshire.  He and his father were my dead end.  The only members of that generation, for who I could not give origins.  A brick wall in genealogy.  For over 25 years.

Then this week, FindMyPast.co.uk had a promotional free access period.  I've had a subscription there before, but revealed nothing new on this line.  Perhaps new archives have been added.  I searched for Henry Shawers, and I found a surprise.

It was in the Wandsworth Prison Register for 1862.  A Henry Shawers, lace weaver, age 34 (born about 1828).  Height five feet, two and three quarter inches.  Grey eyes, fresh complexion.  Christian.  Illiterate.  Weight, a mere eight stone, ten pounds.  A homeless vagrant.  He had been convicted at Wandsworth by C Dayman, magistrate, for the crime of "Begging", and sentenced to one month's imprisonment in the new Wandsworth Prison.  But what really caught me eye was that in the Where born column, most inmates had E for England, a few I for Ireland ... our Henry very clearly had an F for what looks by other entries to be Foreign Born.

He had married Elizabeth Durran five years earlier at Bethnal Green.  He was recorded as a 31 year old Harrow weaver, the son of John Shawers, a copper smith.  Both groom and bride were living at Banner Square, Bethnal Green.  There is no Banner Square today, but there is a Banner Street (see below map).  They lived and married in London's East End.  Silk and lace weavers had been attracted to Spitalfields, Globe Town, and the Bethnal Green area for centuries - many of them from the European continent.  they had included Huguenots, Jews, French, Walloon, and Flemish.  For some time they had weathered the rise of the power loom, silk and fabric factories, through protectionism from overseas markets - but now this protection was lifted.  Many weavers were made destitute, many looked for other work.  By 1862, it appears that Henry had hit rock bottom.

On his way down, he had met and married Elizabeth at the now demolished East End church of St Philips.  They moved from Banner Square, Bethnal Green to 29 Pownall Road, Haggerston, near to Dalston. Their first child was my great great grandmother Elizabeth Rosina Shawers, was born there in September 1858. 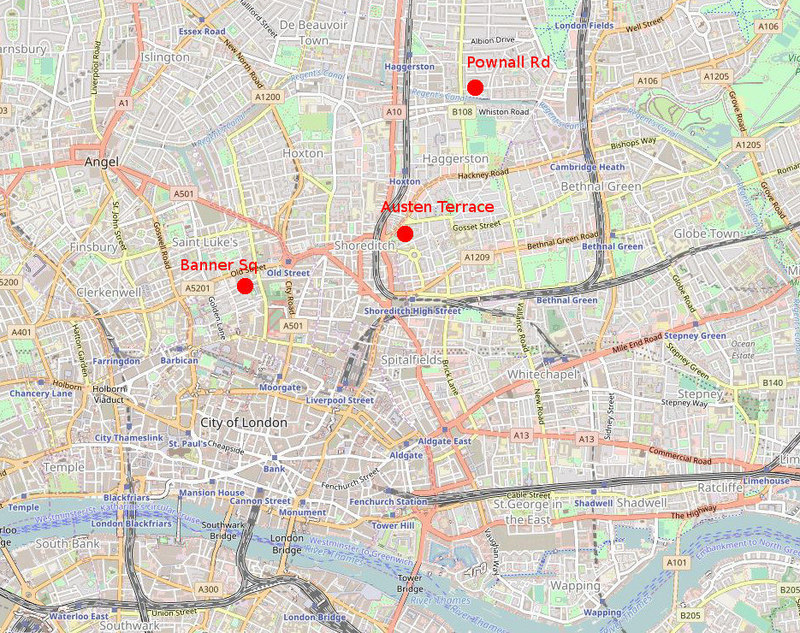 Elizabeth gave birth to a second child that they named Henry Shawers, at Pownall Road in January 1860.  He was still recording himself as a Harrow weaver.  I cannot find any reference to what this was.  Perhaps a form of weaving associated with Harrow in West London?  Silk weaving was the tradition in the East End.  In 1862, he was described as a Lace Weaver.

I haven't yet been able to find the Shawers family on the 1861 census.  However' in April 1862, Elizabeth gave birth to their third child, baptised as William Henry Shawers.  They were now living at Austen Terrace, Lambeth, London.

Henry was convicted of begging and vagrancy less than eight months later, and received a one month sentence in Wandsworth Prison.  It looks on paper as though he hit disaster in 1862.

What happened to his family?

I think that they managed to hold out for a few more years.  But they kept moving.  Their third child, William Henry Shawers died in May 1863, age 13 months at Bletchingley, in the Surrey countryside far to the south of London.  His burial recorded that he was "a stranger's child".  Did this mean that they were travelling, or that his father was foreign born?

They turn up the following year much further to the south, on the South Coast in fact, where a fourth child is baptised Arthur Henry Shawers in November 1864.  That they kept giving their son's the name Henry makes me ask where had their first son Henry Shawers gone?  I don't find him again after his birth.  I suspect that he had died earlier.

They didn't stay on the South Coast for long.  Five months later in April 1865, young Arthur died.  He was buried at Enfield, North London.

After 1864, I lose any references to Henry Shawers, at least with that name.  He had emigrated to England, lived in the East End of London as a lace weaver, been imprisoned for begging on the streets.  He had two, most likely three sons die as infants.  Had Henry himself now passed away?

In 1871, I find his wife and daughter, living at Charlton, Woolwich, South London.  Only they were now living under the names of Elizabeth Hayes, and her daughter Rosa Hayes.  Elizabeth is recorded as a wife of a seaman.  A Mr Hayes presumably, I haven't found this marriage yet.  Does this indicate that Henry Shawers has died?

Ten years later, Elizabeth Hayes and her daughter (my great great grandmother) were now live-in servants for a Portuguese family living in Fulham.  Her daughter is recorded as Rosa S Hayes.  I wonder if the S was for Shawers?  A few years later, in September 1883, also at Fulham, she married my great great grandfather Henry Brooker, under the name of Elizabeth Rosina Shawers.

Where did Henry Shawers originate from?  What was his nationality?

So I've discovered from that prison record that my ancestor Henry Shawers was not British, but regarded as a foreigner.  Where did he come from?  He was a lace weaver in the East End of London, where many Huguenots, and other French and Dutch weavers, had been settling for centuries.  His surname is unusual, but I have found it in both the North of England, and in the West Country - just very rare.  Could this surname in his case however, have been anglicized?  Possibly for example, from Soyers (French), Schwarz (Germanic), or Shaers (Belgian).

I have found two clues to his origin.

On the 11th August 1852, passengers on the Lord Warden, disembarked at Folkestone docks.  The ship had carried them across the Channel from Boulogne, in France.  The List of Aliens recorded as arriving with this ship included a Monsieur Shawers, recorded as having French nationality.  Unfortunately all of the passengers had their occupations lazily recorded as Gents, but I wonder, not a lot of immigrants coming into the country by the name of Shawers, and only five years before our Henry married Elizabeth Durran in Bethnal Green.  My bet is that this was him, and our Henri was French. 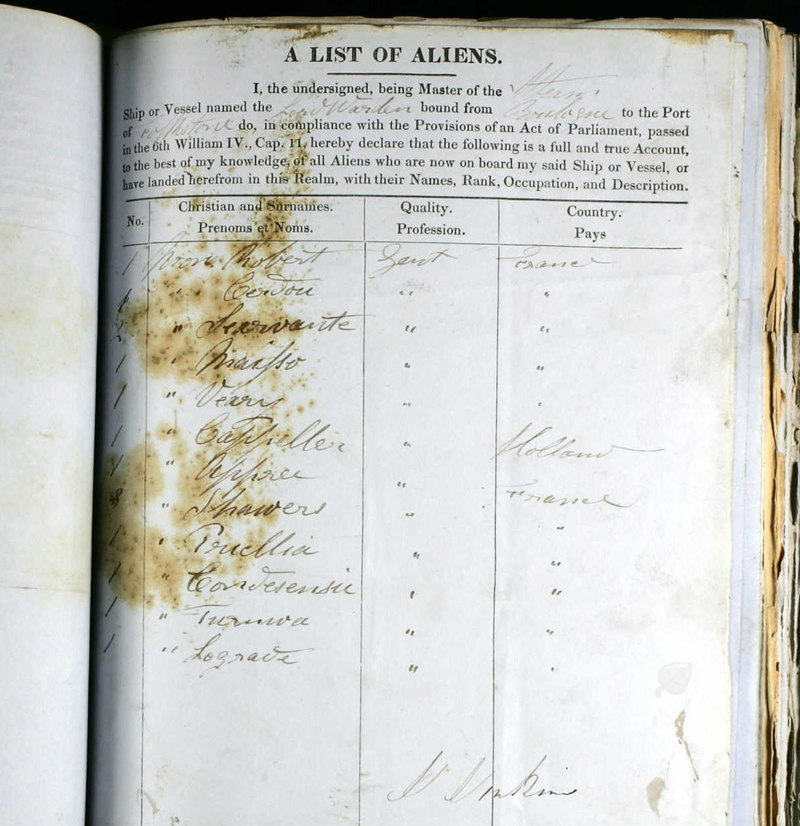 However, before I close the book on that one.  There is just some evidence, that could dispell that, or even his death around 1865.

In July 1873, a 45 year old lace maker was imprisoned in Wandsworth Prison for seven days.  His crime? Drunk in the highway.  His name?  Henry Sayers.  He is described as five foot two inches, blue eyed, no marks.  In 1852, our 34 year old Henry Shawers, in the same prison was described as a lace weaver, five feet two and three quarter inches, grey eyed, no marks.  Both men were 1) Henry Shawers / Sayers, 2) lace weavers, 3) born about 1828, 4) similar desciption, and 5) Foreign born.  Were they the same man?

Only in this record, he is recorded as from Switzerland.

I never did find that marriage of Elizabeth to a sailor called Hayes.

Post Edit:  Just after publishing this post - I find a fresh clue!  In 1914, her daughter Mrs Brooker registered her elderly mother Elizabeth Hayes, into the the Greenwich (Woolwich Road) Workhouse.  Elizabeth's registration includes the following.  What is that saying?  Widow of Henry ?