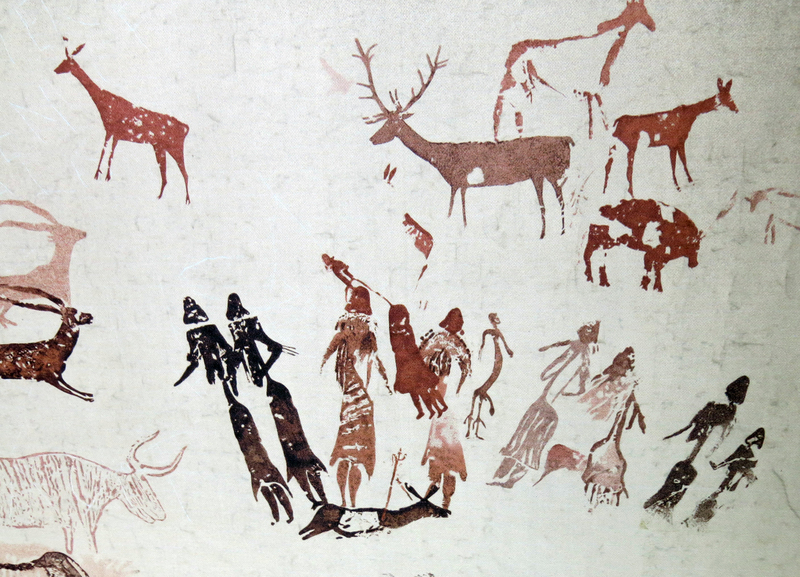 The Dance of Cogul, tracing by Henri Breuil.

A Timeline for my ancestry based on current evidences.

In Africa.  Eastern and / or maybe Southern Africa.  Hominids.  We call them Australopithecines, and in some ways, they resembled modern chimpanzees but that were adapting to walking upright bipedally, in open environments.  They made stone tools.  They had an omnivorous diet.  They were my ancestors three million years ago.  As they were for all of us.  Natural Selection was the big, very slow kicker for prehistory.  Things changed very, very slowly,

The first hominids that are regarded rather loosely as Anatomically Modern Human emerging in Africa.

At this time, most of my ancestors still lived in Africa, but some of my non-anatomically modern ancestors had already migrated out of Africa, and had dispersed across Eurasia for some time.  They included those archaic humans that anthropologists presently call Neanderthals and Denisovans.

Most likely by now, most of my hunter-forager ancestors had left Africa.  An early out-of-Africa base appears to have been Arabia and the Middle East.  Some of my ancestors had met now, after long family separations (I have 328 Neanderthal variants in my DNA, according to 23andMe), it was the birth of the Eurasians.  The last Ice Age encroached.

People had been learning to live with the climatic fluctuations of the last Ice Age.  Each hardening of climatic conditions had frozen Eurasian human populations into isolated conditions that increased genetic drift.

Where were my hunter-forager ancestors 14,000 years ago?  Most likely in pockets dispersed across Western Eurasia, from South-West Europe, across to Central Asia, and from Arabia up to Siberia.  My direct paternal (Y-DNA line) ancestor at this time, most likely lived somewhere between what today is Syria, and Pakistan.  He could for example, have been an ibex hunter in the Zagros Mountains of Iran.  My direct maternal ancestor (mtDNA line) most likely lived in another pocket of hunter-foragers somewhere in Central Asia, such as what is now Kazakhstan, Afghanistan, the Siberian Plain, or nearby.  Some of her, or other of my ancestors at this time, had shared ancestry with a Siberian tribe of mammoth hunters, that archaeologists now call the Mal'ta–Buret' culture.  Other of my ancestors of this time may have most likely lived in the Caucasus, Southern Europe, Middle East, and Arabia.

Many people in Western Eurasia were adapting to a new way of living, where farming and agriculture, with a range of domesticated species of animal and plant were spreading, often carried along in waves that are marked in our DNA.  The Neolithic Revolution that had affected my ancestors had occurred a few thousand years earlier in South-West Asia, in an area that we call the Fertile Crescent - the Levant, and down the Tigris and Euphrates river valleys. Some of my ancestors may have been early pioneers of this new way of life in the Middle East.

My direct paternal (Y-DNA line) ancestor may have lived in one of the Uruk farming settlements in Babylonia, or could have been a Neolithic farmer in a number of cultures spread across what is now Iraq, Iran, or Pakistan.  He alternatively could be one of a number of specialists that early civilisation was generating - a potter, a weaver, or a miner.

My direct maternal line had drifted out of Central Asia, and onto the Eurasian Steppe Corridor.  My mtDNA ancestor was most likely living now on the Pontic and Caspian Steppes - what is now Ukraine, Southern Russia, or Kazakhistan.  Her people would have most likely herded domestic livestock including horses, cattle, goats and sheep.  They were mastering the horse and using the first wheeled wagons. On the Steppe corridor, they had access not only to trade with the civilisations south of the Caucasus, but to other cultures, and their materials.  They were experimenting with some of the earliest metallurgy including copper working.

Asides from her, I most likely had a number of other ancestors living in these pastoralist cultures on the Steppes at this time. Perhaps around 28% of my ancestors 5,500 years ago, lived there.

Other ancestors of mine at this time, were dispersed across Europe.  They include the Neolithic European farmers.  They had descended largely from populations that had previously lived in the Levant and Anatolia (what is now Turkey and the Middle East).  Some of my Neolithic European Farmer ancestors could have even lived in Megalithic Britain, but most likely, many of my European Neolithic ancestors lived elsewhere on the Continent, in for example, the Rhine valley, Danube valley, Italy, or Iberia.  Many of them had ancestry that had hopped westwards along the Mediterranean, the first farmers from Anatolia and the Levant (50% of my ancient admixture), but with a smaller admixture of hunter-gatherer ancestors that had previously lived in Europe (12% of my ancient admixture). Did this 12% admixture include the surviving DNA of any of the last Mesolithic hunter-gatherers of the British Isles?  I'd like to think so, but possibly not.

My Copper Age, horse riding Steppe ancestors had migrated westwards into Europe.  There they had admixed with the earlier European Neolithic people.  Their DNA appeared in a Copper Age fusion culture across Central Europe (Poland, Germany, Czech, Slovakia, Hungary, etc) that we call the Corded Ware Culture.  My direct maternal ancestors (mtDNA line) were most likely of that culture for a time.  Their mtDNA markers turn up associated with it.

Aside from her, some of my other ancestors would have been in the Corded Ware Culture.  However, the westward movement of DNA from the Steppes didn't end there.  In Western Europe, it triggered the birth of another culture, that archaeologists call Bell Beaker Culture.  Much of the Y-DNA of the Steppes, was carried into the Rhineland Bell Beaker men.  Some of my ancestors could have belonged to the Bell Beaker culture in Iberia, or Western France.  However, what is more likely is that at least some of them belonged to the Bell Beaker culture that had settled in the Lower Rhine Valley (The Netherlands and NW Germany).

Many of my ancestors at this time may have played a part in the Corded Ware and Bell Beaker cultures of Europe.  mtDNA (H6a1 and H6a1a) very close to my direct maternal line has been found in both cultures, including in a Bell Beaker context in the Netherlands.

My direct paternal (Y-DNA line) ancestor was an exception.  He most likely was living somewhere around what is now Iran, possibly as a farmer in the Bronze Age civilisations there.  Ancestors in Southern Europe were less affected by the Copper Age Steppe migration event (mainly in their Y-DNA), and continued to carry mainly Neolithic European Farmer DNA in their autosomes. 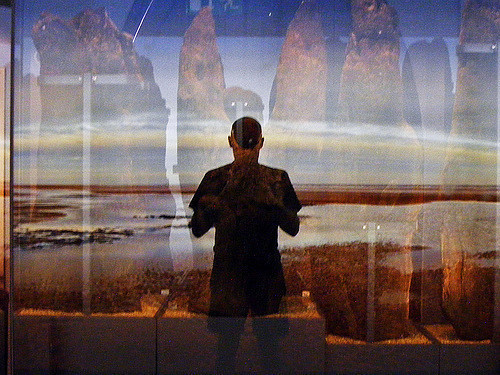 I want to just stop here, to record that some of my Bell Beaker Culture ancestors had crossed the North Sea from the Lower Rhine (Netherlands) to settle in South East Britain.  Their descendants were living in Bronze Age Britain.  I can't say with any degree of certainty, if my direct maternal (mtDNA line) ancestor was a part of this migration, or whether her line was still on the European Continent, and crossed later.  Either are equally feasible.   I would have had other ancestors, perhaps the majority at this time, scattered across the European Continent, but most likely, some in what is now Germany, France, Scandinavia, and Southern Europe.

My direct paternal (Y-DNA line) ancestor was most likely still in the area of Iraq, or Iran. Perhaps for example, he was an Assyrian. 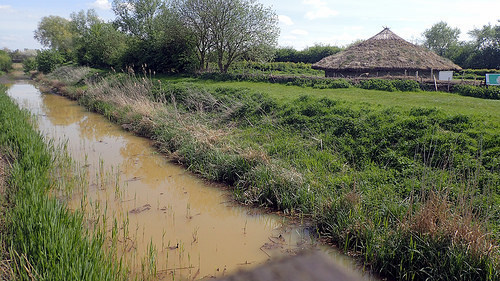 This may or may not have included my direct maternal (mtDNA line) ancestor, who could have been a Briton, but may have equally lived along with many of my other ancestors - in an Iron Age Germanic culture in the Netherlands, Northern Germany, or Denmark. Others may have lived further to the south and west in Europe in other cultures  such as the Gauls.  I have a great great great grandparent from Switzerland.  His ancestors at this time, could have been dispersed through a number of tribes across Central and Southern Europe.

My direct paternal (Y-DNA line) ancestor was most likely still in the area of the Middle East, or Iran. Perhaps for example, he was a subject of the Persian Empire. 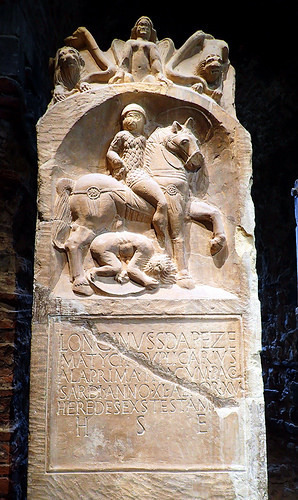 Lets stop here a moment.  Roman Britain.  Perhaps 40% of my ancient ancestors living here at the time.  Britain had been occupied by the Western Roman Empire for some time.  My ancestors in Britannia would have very much identified as Romans, although they largely descended from the Iron Age Britons. However, there were traders, soldiers, and merchants from further afield here.  That might have even included my direct paternal (Y-DNA line) ancestor, that could for example, have traveled to Southern Britannia from Assyria or Persia, or perhaps even from the Eastern Roman Empire in Anatolia and the Levant.

Meanwhile many of my ancestors were living in Germanic pagan tribes across the North Sea in what is now the Netherlands, Northern Germany, and Denmark.  Others may have been living in Roman Gaul, Tuscany, or elsewhere on the Continent.

I believe that the majority of my ancestors now lived in early medieval southern Britain, although some may have still lived further to the south in places such as Netherlands, France, Switzerland, Spain, or Italy.  If he didn't arrive earlier, perhaps my direct paternal (Y-DNA line) ancestor arrived in Wessex about now, as for example, a specialist from the Middle East, working for the Roman church.  Many of my ancestors in South-East Britain had arrived from across the North Sea over the preceding centuries, with Germanic tribes such as the Angles, Frisians, Danes and Saxons.   Archaeological artifacts in Norfolk correlate best with some sites in Northern Germany, towards the border with Denmark.

This would have included Anglo-Saxon ancestors of my mother, that most likely rowed past the decommissioned Roman shore fort at Burgh, and perhaps moored at Reedham.  It may have included Danish ancestors of her that a few centuries later settled the district of Flegg in East Norfolk.  DNA shared on the Continent in places such as modern day Germany, Netherlands, France, Belgium, and Denmark reflects strongly in my ancestral DNA tests.  Much of it may have arrived during these early medieval immigration events.

My direct maternal (mtDNA line) would most likely be in East Anglia or nearby by now.

Exchange between South East Britain and the European Continent didn't end.  It is possible that I had more ancestors arrive here from Normandy, Medieval France, and the Spanish Netherlands.  However by 500 years ago, It is possible that most of my ancestors now lived in Tudor England.  There would most likely still been a minority of later ancestors migrating from elsewhere, although I so far only see one great great great grandparent from Switzerland, in my genealogical record.  It is likely that my direct paternal (Y-DNA line) ancestor was living in Southern England, and that my direct maternal (mtDNA line) ancestor was living in East Anglia.   I trace his line back to the Oxfordshire / Berkshire border, and her line back 300 years ago to the village of Bunwell in Norfolk.

It is likely that the majority of my Tudor ancestors were living in East Anglia by now, particularly in the County of Norfolk.  Many of the men would be transitioning from medieval peasant status to that of free rural labourers or some into farmers or tradesmen.

It is highly likely that by now, all of my ancestors (except the Swiss line at Generation 6, arriving 160 years ago), lived in South-East England.  The majority in Norfolk, East Anglia, perhaps as high as 77% East Anglian, also a cluster in the Thames Valley of Oxfordshire and Berkshire, and a smaller cluster around Lincolnshire and Northamptonshire. 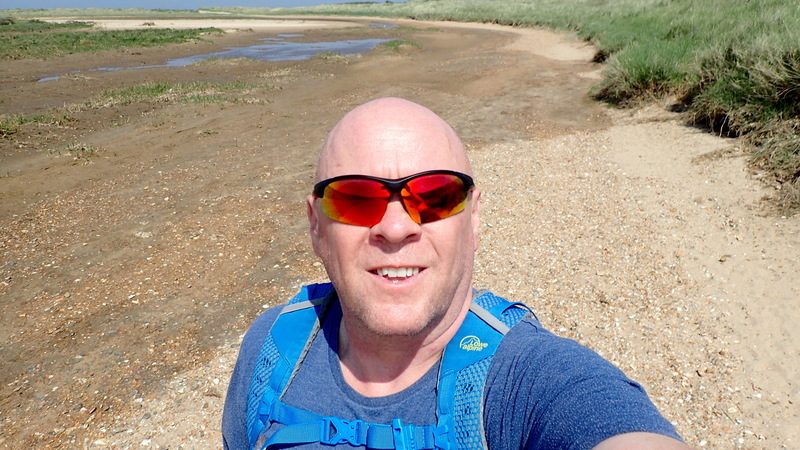 That's time travelling through my own ancestry.