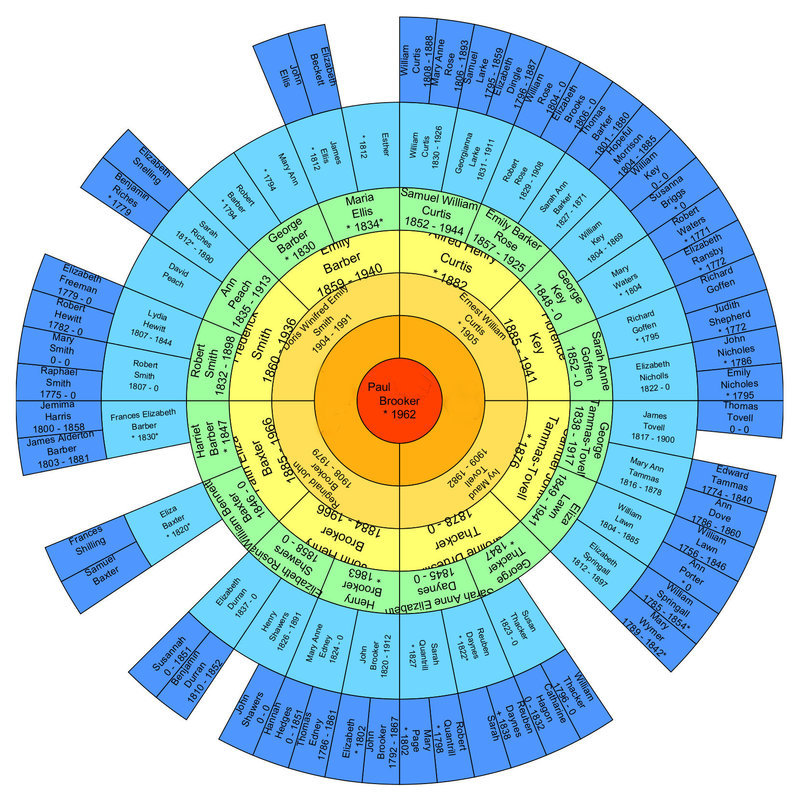 As I wait for my 23andMe genetic profiling results (on Step 4 - DNA extraction), I have been spending perhaps a little bit too much time, on the computer, with internet genealogical resources such as FamilySearch.com, and the Norfolk FHS resources, to build up my paper genealogical record.  I'm impressed by the modern online resources, although I'm aware that transcriptions are always prone to error.

I've also been having a blast building up my family tree database using the free Open Source software Gramps 4.2.  I'm a big fan of Open Source, and this program runs great on both Windows 7 64 bit, and on my Linux netbook.  I can see where Gramps may not appeal to some novices.  It's more functional than pretty, with an abundance of tabs for sources, attributes, notes, etc.  It encourages me to record better quality genealogy, than I did twenty years ago with the mess of my notebooks and pieces of scrap paper.  It also imports and exports GEDCOM format files with ease.  Essential for safe back ups and for sharing.  I can also generate reports and charts such as the above ancestor fan chart.

I'm please with how the above chart for example, has developed over the past few weeks.  I still have plenty to research for free online, so it is far from completed.  Still, considering that it represents a total of seven generations, I think that it is impressively complete.  If the paper was true, then these name should represent where my autosomal DNA has come from over the past few hundred years.

Of course, paper genealogy is not always true.  1) mothers sometimes deceive about who the biological father is, or make a mistake, when filling out birth or baptism forms.  2) genealogists make mistakes.  These errors increase the further back the records.  English/Welsh censuses, give no detail before 1841, civil registration did not exist until 1837, and parish registers before 1812 are often rough notes scribbled down by the curate.  Therefore, go back much before 1790, it's easy to make too much of too little source.

Genealogy is a lot of work.  The general public frequently expect that they can simply print their ancestry off, with a click of a button, and perhaps a Paypal fee.  It doesn't work like that.  It involves years of research for most of us.  However - here is the crunch.  The research is the rewarding part of the journey.

So in this Binary Age, people instead opt for the instantaneous results of Genetic ancestral composition with a commercial DNA lab.  1) it is fast and easy.  2) it tells the truth.  It follows DNA and SNPs, not forms or lies.

How good is it really? 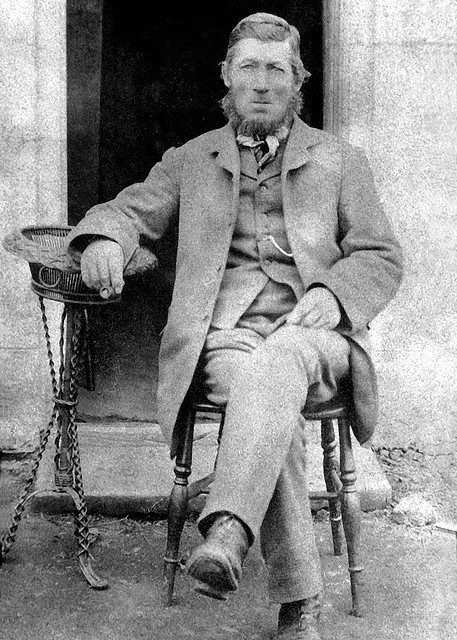 The above portrait is of my great great grandfather Billy Baxter (William Bennet Baxter), who was born in Gressenhall workhouse, Norfolk, in 1846.

Now that I've submitted a DNA sample to 23andMe, while waiting for the results, I keep thinking, and wanting to write about my heritage and ancestry.  Hence maybe the recent posts on my past archaeology work, my interest in our Anglo-Saxon heritage, and now more directly, my past and recent experience with genealogy.

I first became interested in the family tree around the late 1980s.  I was a young married guy, on the brink of rearing my own family, so maybe there was a desire to find out where we came from, entwined with where we were going.  I can remember as a boy being interested in any tales about my alleged ancestors.  As I said in a recent post, I was always fascinated by the past.

I'm probably lucky in some ways.  Genealogy can be so Internet and computer databased these days.  I conducted most of my research before all of that.  I would visit county record offices and archives around England & Wales, and wearing white cotton gloves in reading rooms, sift through the original registers and documents - some of which were in the original handwriting of my ancestors.  Two of my ancestors had been long serving parish clerks in Norfolk.  I'd also visit archives in London, search through indexes of birth, marriage, and death (BMD).  If I wanted to order a BMD certificate, I'd write to a detective or genealogist, that would fetch bundles of certificates from the archives at a cheaper price than I could do it first hand.

With my wife, I'd also travel around the churches, cemeteries, and grave yards.  We'd interview elderly relatives, ask to see any family photographs or certificates.  Most were eager to tell their tales.

A nicer way of researching than sitting at home and paying to see transcript records in an internet database.  However, I made a mistake.  Computers were coming along.  I recorded too much onto obsolete system and using obsolete software.  Then I hit middle age.  I let go of too much, all of my notes, charts, and records.  My marriage collapsed, I moved on.  Holding onto things seemed futile when I have only one life.  I lost much of my genealogy.

Then a few days ago when I was looking at my old archaeology website on the Internet Archive Wayback Machine, I spotted a few pages on my old genealogy.  There was a link to a .gedcom file that included a lot of the data that I had accumulated years ago.  It worked, the Wayback Machine had captured my .gedcom file!  Data on over 1200 ancestors and relatives from both mine, and the ex's family.  I looked for some Open Source software and found the Gramps program.  I downloaded it and the .gedcom file onto both my Windows 7 PC, and onto my Linux netbook.  After fiddling for a little while, the software opened my old gedcom file - there was all of the data, or at least a lot of it.  Charts, resources, BMDs, baptisms, burials, etc.  Retrieved from an Internet Archive, and saved in a format that still works. 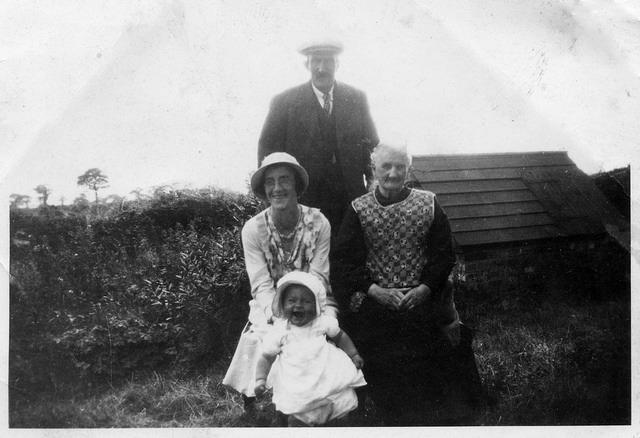 The above group photograph is of four generations.  The baby is my Aunt Gladys, the mother is my maternal grandmother, the man is her father, my great grandfather Sam Tammas-Tovell, and the old lady is my great great grandmother Eliza Tammas-Tovell (nee Lawn).  Probably taken in the Halvergate or Tunstall area of Norfolk around 1936

My Genealogy and 23andMe

Most of my recorded ancestry, and most likely, most of my actual ancestry, lived in the English county of my birth - Norfolk.  Seven of my eight grandparents were born in Norfolk. My autosomal data should be pretty typical for a Norfolk born East Anglian.  The exception was my paternal great grandfather, who was born in Victorian London, of mainly Oxfordshire descent.  On the 23andMe results, he should have passed down my Y chromosome haplogroup.  On paper I can go back another three generations, to a John Brooker, who fathered some children between 1815 and 1836 in the parish of Rotherfield Peppard in Oxfordshire.  All that I currently know of his origins, is that he stated that he himself was born outside of Oxfordshire.  He lived close to the county border with Berkshire, and I suspect that he may have originated from there.

My maternal line, which should represent my mtDNA haplogroup, as with most of my recorded ancestry, is very Norfolk.  I can trace it back to Sarah Daynes (nee Quantrill), born at Wymondham, Norfolk circa 1827.  I don't think that it would be too far fetched to suggest that my ancestors most likely lived in the Norfolk area since at least as far back as the old East Anglian Kingdom, and perhaps many of them much back further, perhaps thousands of years.  Some of them however were very likely to have been part of that Anglo-Saxon immigrant Third, and to have arrived from across the North Sea.  Some of them may have arrived a bit later.  East Anglia was very much a part of the Danelaw.  Many villages in East Norfolk - as in parts of Lincolnshire and East Yorkshire, are regarded as having names that were Old Danish in origin.  Apparently even one of my family surnames - Tovell, has been identified as Old Danish, coming from Tofi-son-of-Hilda.  Another family surname Thacker has also been suggested as a Scandinavian form of thatcher.

I'll be interested to see how 23andMe analyse the Ancestry.  In all of my ancestry, I have not found any evidence of anyone coming from outside of England.  It's all Norfolk, London, and Oxfordshire - English surnames.  Therefore I'd expect the 23andMe autosomal results to come out pretty much under the British & Irish group.  However, should we ethnic English, because of our more distant history, expect elements of Scandinavian, French & German, and North West European?  My understanding is that autosomal data mainly relates to the most recent several generations.  My Y chromosome should belong to a common British male haplogroup.  It most likely passed through Oxfordshire in SW Britain.  My mtDNA should belong to a very East English haplogroup.  It might have arrived in Britain in late prehistory, or it might have arrived during the Anglo-Saxon or Viking period.

Too much speculation, I must expect my DNA results to take weeks to process.