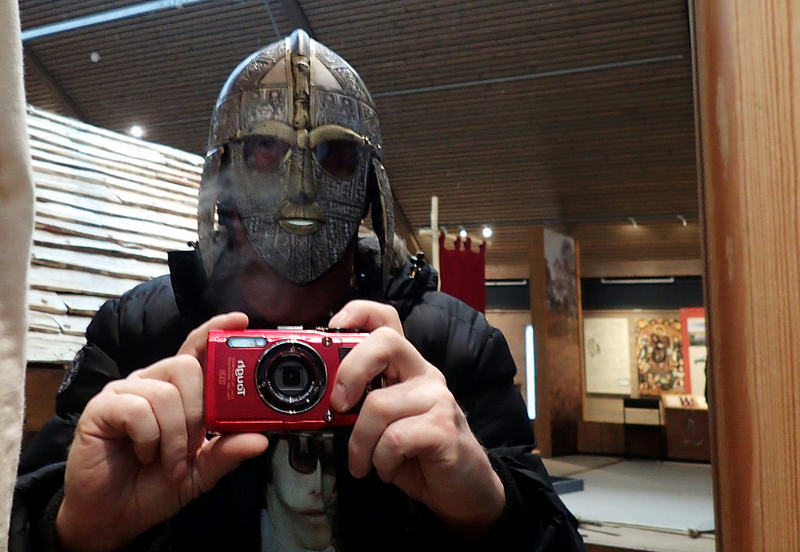 A day off from work, and I had promised myself that I was going to get out and tick off a job that's been waiting some time.  A visit to the Anglo-Saxon ship burial site at Sutton Hoo in Suffolk.  Maybe I should have checked the weather forecast first.  I would have seen that Storm Doris was going to hit East Anglia.  Never mind, I got there and back in one piece, having circumnavigated a number of fallen trees.  Luckily, I arrived before the centre shut it's gates.  I was advised not to walk to the mounds, for fear of windfall - but only mad dogs and Englishman.  At least it was quiet. 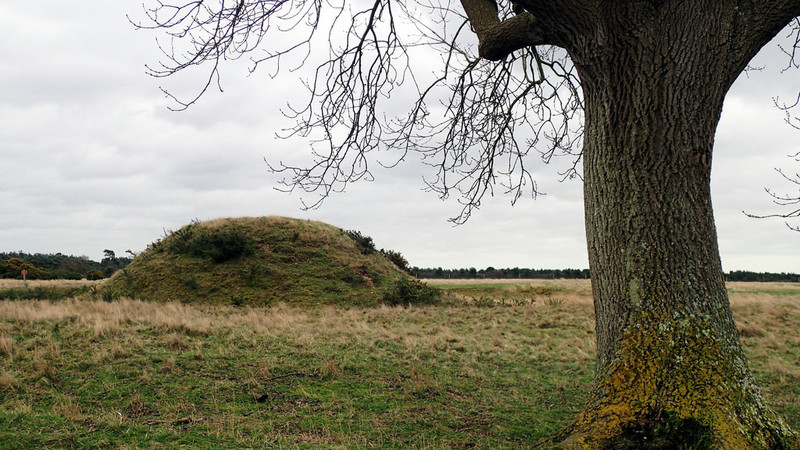 The nature of these mounds was revealed back in 1938, when the land owner, Mrs Edith Pretty, commissioned an investigative excavation.  The burials have included whole ships, warriors, swords, grave goods from all over AD 7th Century Europe, and a horse.  The interpretation is that it was the burial site of the Kings of East Anglia during the 6th and 7th centuries AD. 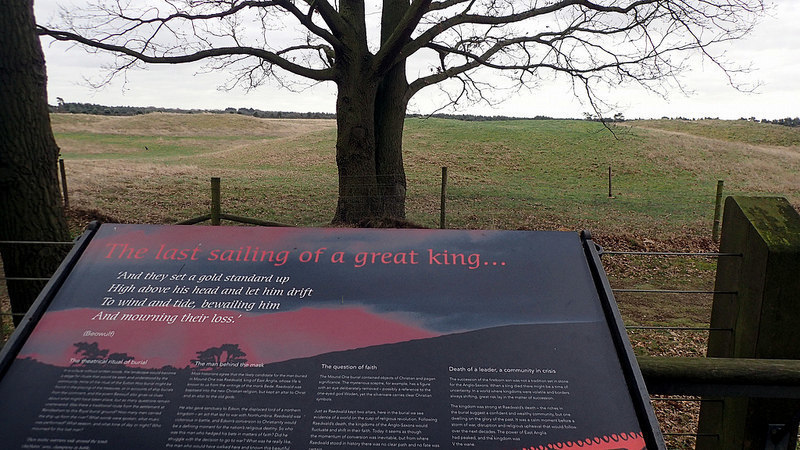 The 1938 excavation revealed the soil marks and iron rivets of a burial ship.  Built in a clinker design, it appears similar in many respects to ship burials in Sweden, only at least two hundred years before the classic Viking examples.  Initially Mrs Petty and her team thought that they had found a Viking ship burial, but at it's centre - although there were no surviving human remains, they found a treasure of grave goods that suggested an Anglo-Saxon origin.  Nothing like it had been found before. 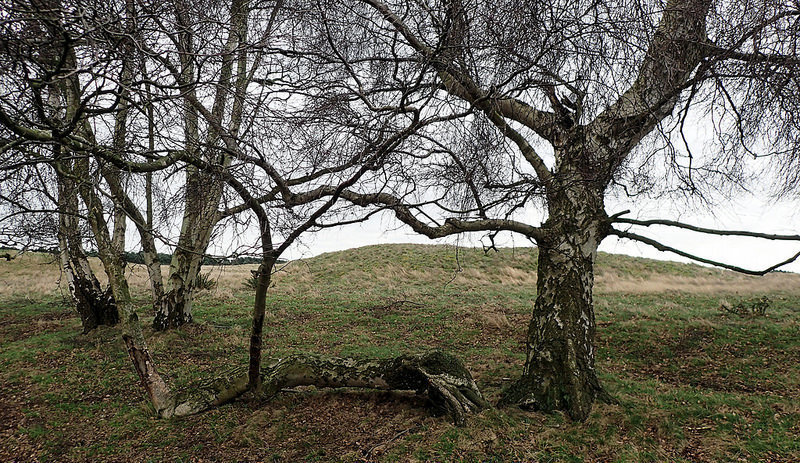 Excavations of the mounds have also revealed that treasure hunters and grave robbers had removed many artifacts during previous centuries, and caused much damage.  One reported dig in another mound here, during the mid 19th Century reported that they found no treasure, just lots of iron rivets - that they sold to the local iron smith to produce horse shoes!  This suggests at least one other ship burial at this site. 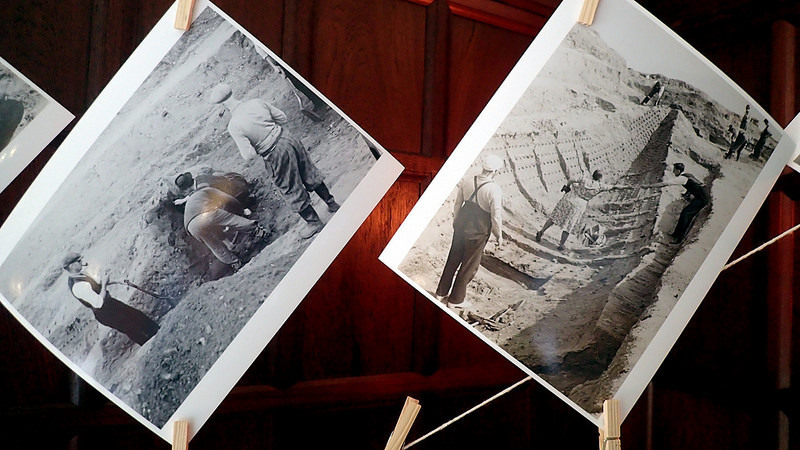 Mrs Pretty lived in a house close to the mounds, that is partly open to visitors.  Artifacts, letters, photos of the 1938 dig are displayed in the house. 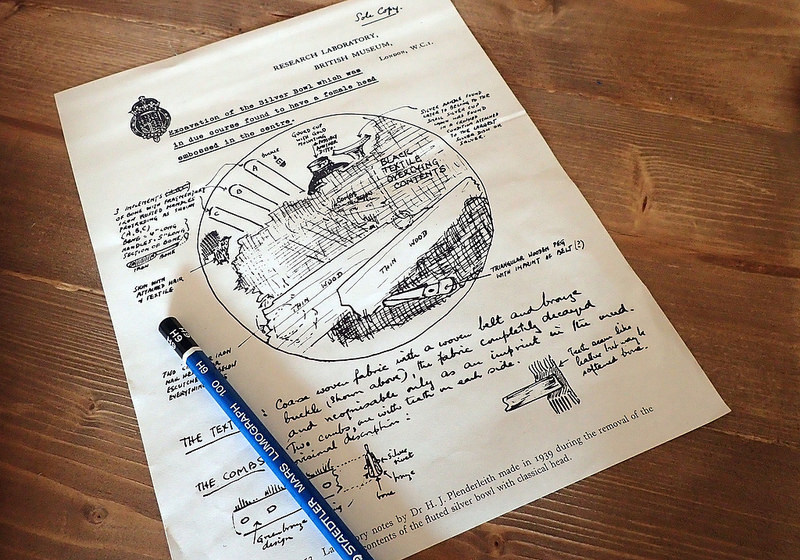 The original Sutton Hoo Treasure is held in the British Museum in London.  I've seen it several times, but this was my first ever visit to the dig site itself. 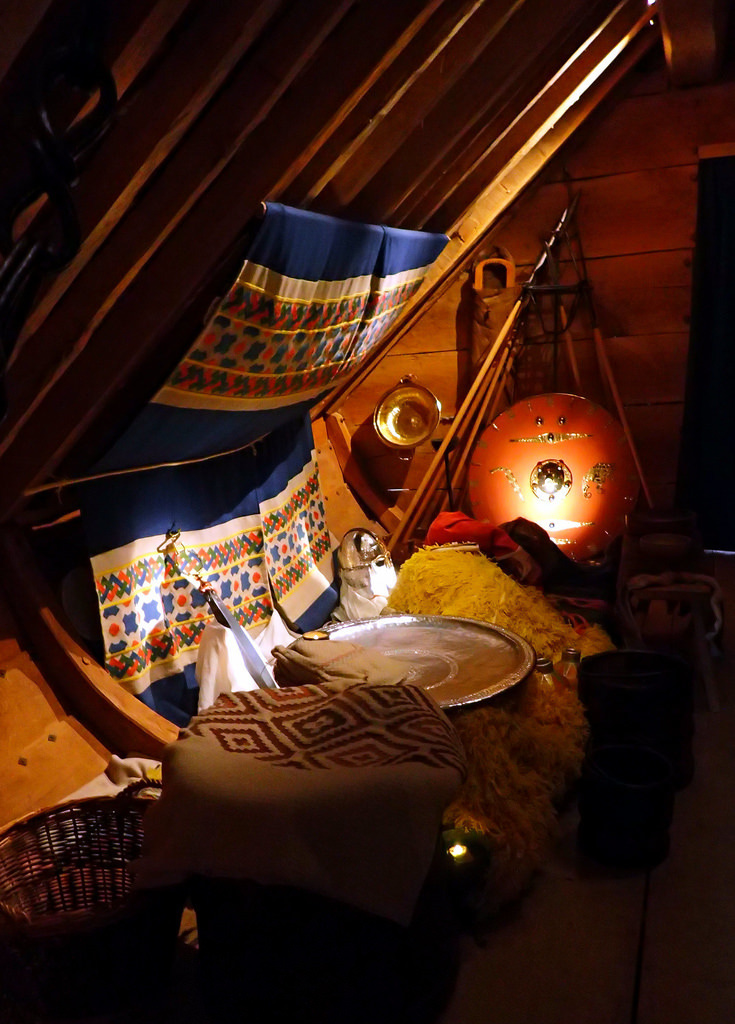 Above, a proposed reconstruction of what the chamber in the ship may have looked like at the time of burial.  Although no human remains survived, it is speculated that this was the burial of King Raedwald, who ruled as King of the East Anglians AD 599 to AD 624.  Raedwald is considered the most powerful early 7th Century Anglo-Saxon king in the British Isles.  He belonged to the Wuffinga Dynasty of early East Anglian royals.  Below is a replica reconstruction of the famous ceremonial helmet found in the 1938 ship burial. 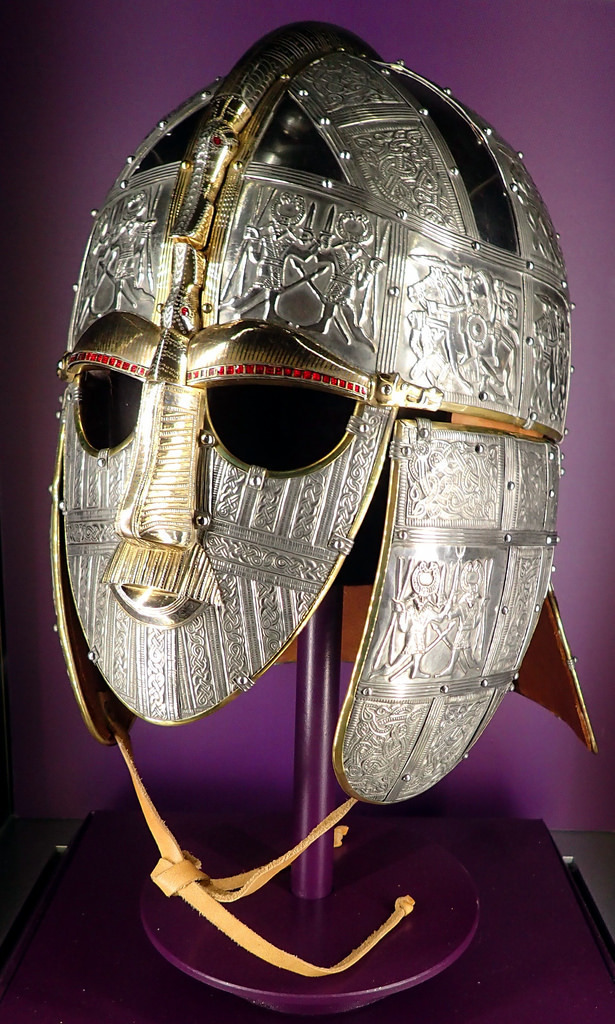 The helmet appears styled on ceremonial helmets worn by Roman generals in the late Western Roman Empire.  It has been suggested that the craftsmanship appears Swedish.  The Swedish links have led some to speculate that the Wuffing Dynasty may have had links to Sweden.

More replica reconstructions from the treasure that can be seen at the Sutton Hoo visitor centre. 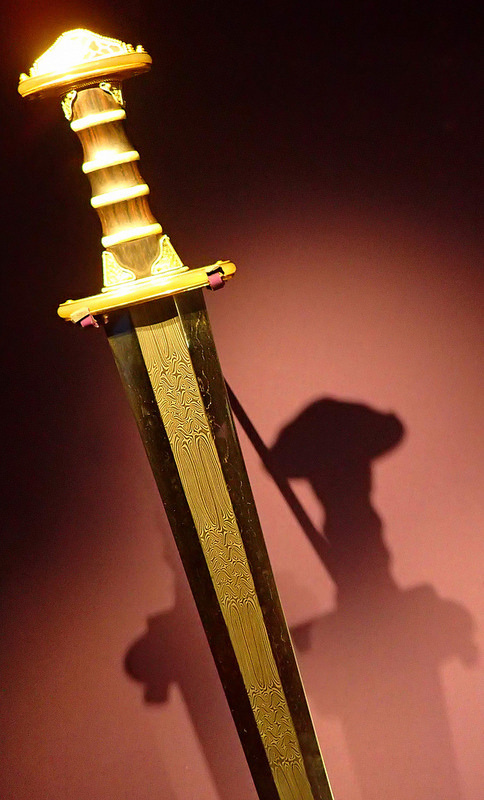 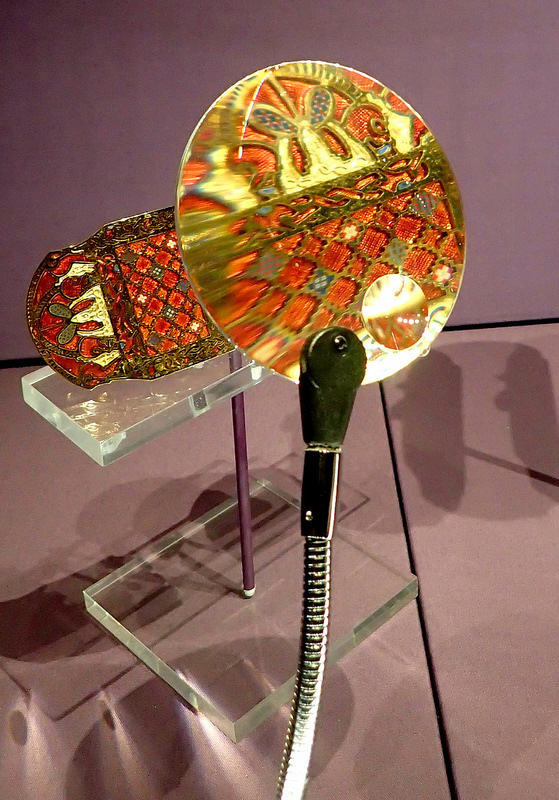 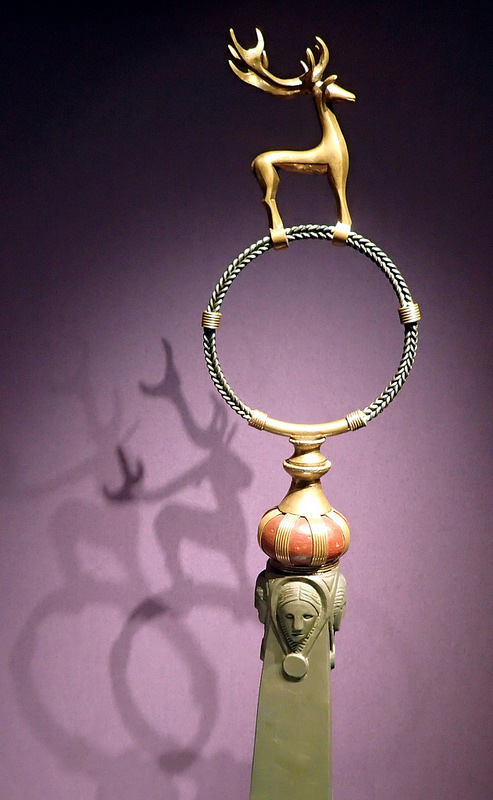 Grave goods appear to have came from all over contemporary Europe - from Ireland, France, the Eastern Mediterranean, and Scandinavia.  This demonstrates the ability of the East Angle elites to trade goods from far away. 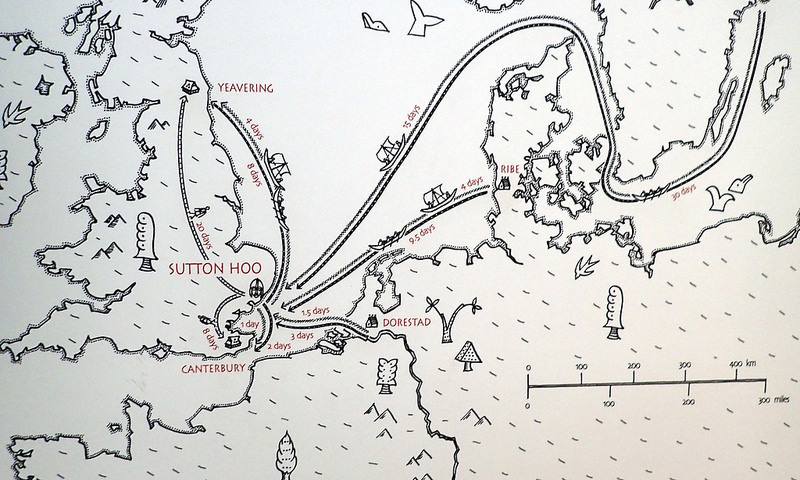