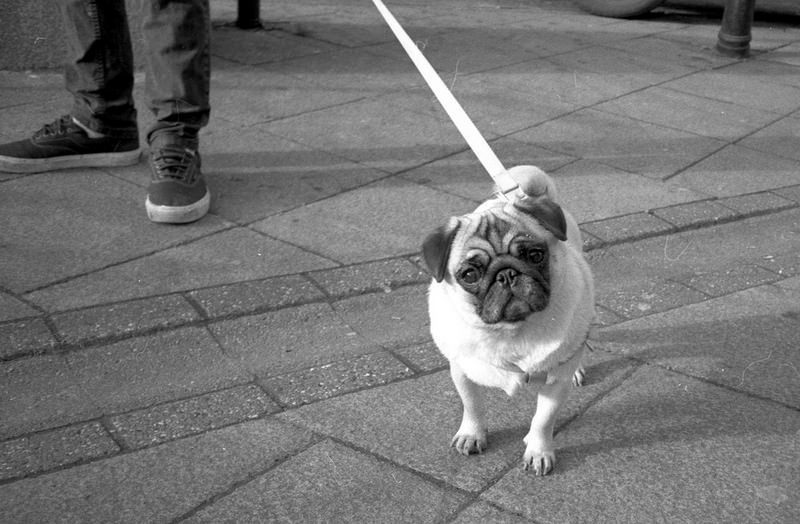 The Flickr Explore algorithm and it's fans appear to like this photograph today.  A pug in the town.  Pugs are apparently very in at the moment.  I captured this last week on Kodak Tmax 400 film, loaded into my Yashica T2.  I developed it in Kodak Tmax developer.  I'm not too sure that I like that developer, perhaps I should increase developing time, I like a little more contrast on my negatives.

I haven't actually discussed my photography much in this new blog have I?  I feel as though I did that enough on my previous blog, The Tight Fisted Photographer.  However of course I haven't any intention of walking away from b/w film photography.

Just for the sake of any future voyeurs who stumble onto this journal.  I'm living in 2016, the Age of Digital, the Binary Age.  I don't have any problems with that, obviously I am embracing it in the form of this web-blog and in sharing my images on Flickr.  I have a smartphone, and I even use a Go Pro from time to time.  I was actually a pretty early fan of fully digital photography.  I'd even say that although I spent the first forty years of my life, living during the great Age of Film, that it was with fully digital cameras, that I became more enthusiastic about photography, and for example, learned to experiment much more with exposure methods, composition, and the technology itself.
Yet, unless I need a quick, easy, colourful and technical image, I rarely bother with digital cameras anymore.  Why?  They no longer scratch my itch so to speak.  I enjoy the technology, and the process, of hybrid film photography.  Not only that, but I've come to appreciate, even to love, the results, the photographs, the argent tones of b/w film photography - even those that have been digitally scanned from negatives or prints.  I want to record the rest of my life, and my world experience, onto the silver salts of b/w negative film.
It goes against the grain (there's a pun there), but I don't like where photography is going.  I don't like the mainstream of what goes up on Flickr or in photography club exhibitions.  So much gloss, shiny, sharp, magazine inspired, technically perfect, but boring dross (in my eyes).  So much emphasis on post process software.  HDR makes my eyes bleed.  Thankfully, not all photography enthusiasts have been seduced by the gear markets.  You can still find some great images there, many of them shot on film.
No.  as long as I can buy b/w film, I'll stick to the salts of silver.  It is a matter of personal taste. 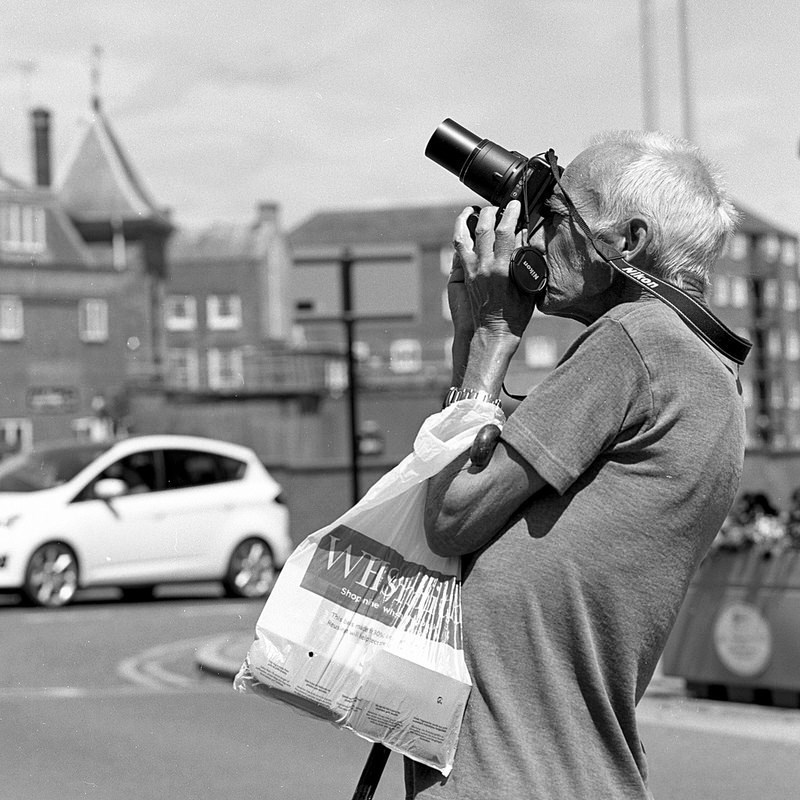 The above photograph I took on Ilford FP4+ film, exposed in my Bronica SQ-A with the PS 150mm f/4 lens attached.  This guy appears to be embracing digital photography, but it looks as though He is trying to use the LCD as an optical viewfinder.  He was concentrating so hard, he never even noticed me creep up to him and steal this candid.  I love this photo.