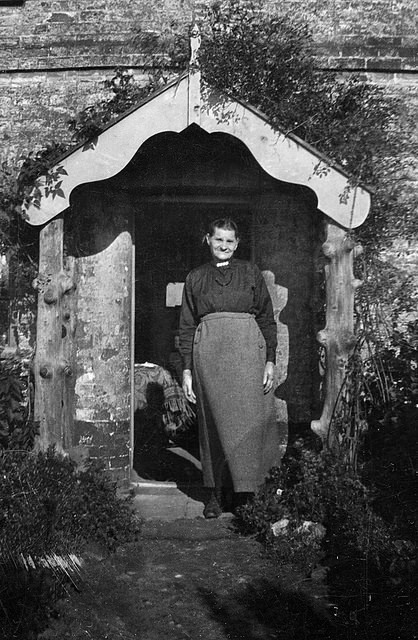 The above photograph is of my Great Great Grandmother Sarah Anne Elizabeth Thacker (nee Daynes), of Rackheath, Norfolk.

I'm writing this for someone with shared chromosome segments that I've met on Gedmatch - my first potential relative, found through DNA comparisons.  She's in the USA, and has Thackers - which may be a link.  It's not that a common surname here, and very East English.  It has been suggested that the name is an Anglo-Danish variation of Thatcher.  I'm not so sure that it is of any Norse origin.  However, the strongest concentration of the surname in Britain today, is in the Dane Law county of Lincolnshire.  My Thackers though belong to a secondary cluster - also in the Dane Law, the region of East Anglia.

I'm going to propose an estimated birth year of circa 1762 for my G.G.G.G.G grandfather John Thacker.  He first appears on my genealogical record on 2nd February 1787, when he married Mary Clarke at Rackheath in Norfolk.  However, tragedy struck.  Mary died a few years later in 1740, and was buried in the neighbouring parish of Salhouse.

John wasn't a widow for long.  He married my ancestor Ann Hewitt on the 26th April 1791 at Salhouse.

William was an agricultural labourer, a farm worker by trade, as were the majority of my 18th and 19th century male ancestors.

My G.G.G grandmother Susan Thacker, gave birth to my G.G grandfather, George Thacker in 1847 at Rackheath.  The father was not recorded.

There is a family story about Sarah's strict paternal behaviour.  She was known as "Thacker by name, thacker by Nature" referring to "thacking" - to hit or punch hard.