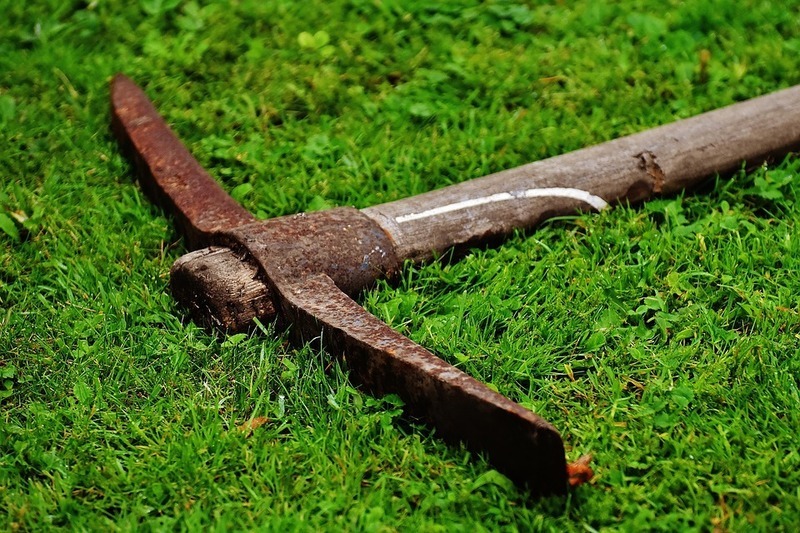 Another genealogist gave me a hint some twenty years ago, that they'd seen one of my Attleborough Smith ancestors as listed among the inmates of Norwich Castle Gaol.  I never followed it up until today, when I bought a second hand book called "Unquiet Country".  Voices of the Rural Poor 1820 - 1880. Robert Lee 2005.

The guy behind the till in the book shop said that he had been tempted to purchase it.  I replied that I might find one of my ancestors in it.  I didn't think that I would.  Then sitting on the bus, on the way back, as I reading through the chapter "Seems we have a revolution on our hands",   I read about an incident in Attleborough, Norfolk during December 1830:

At least their slow walk gave the two men time to weigh up what was happening.  The churchyard was crowded.  Francklin noted that many faces were muffled and masked.  In evidence, too, were a number of sinister looking sticks, clubs and cudgels, some resting on the ground, some shouldered, some being slapped rhythmically against tensed, sweating palms.

"See the flag Dover?" muttered Francklin from the side of his mouth, 'Seems we have a revolution on our hands'.  Still furled, but unmistakable and carried with defiant pride, the tri-colour flag of revolutionary France provided a splash of colour in a damp corner of the graveyard.

The background was the Swing Riots.  Since August, many agricultural labourers and paupers took direct political action in protest against their deteriorating condition, that had been escalating with a long history of enclosure - the privatisation of pastures where the poor grazed their meagre livestock.  A favoured target were the new machines of the Agricultural Revolution, such as the threshing machines, which reduced the need for much labour on the land.  Masked gangs would set fire to them.  A mythical hero called Captain Swing gave name to the riots.  Workhouses would be attacked - the places where the poor were expected to plead for food and shelter, living as inmates for the offence of being replaced by such machines.  Tithe barns would also be attacked - the farmers were falling over themselves to blame the Church for excessive taxation, that prevented them paying a living wage to their labourers. 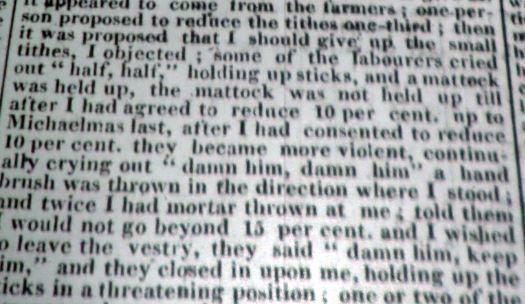 Some of the labourers cried out "half, half," holding up sticks and a mattock was held up, the mattock was not held up till after I had agreed to reduce 10 per cent ... they became more violent...

East Anglia was the epicentre of the Swing Riots.  Continuing in Attleborough, the rioters harangued the annual tithe meeting where the parson organised tithes for the forthcoming year.  The Parson, the Rev. Francklin, was assaulted when he refused to drop the tithes to a half.  He was forcibly imprisoned by the Swing rioters.  One of the masked men lifted a mattock (a pick axe-like tool as top photo) when the parson refused to give more than a 10% reduction in tithe tax to the farmers that employed them.  Another called for a knife, to cut off his head.  The parson and his associates were beaten, the vestry pilloried with stones.  Previous to arriving at the church meeting, the mob had already destroyed three threshing machines, and attacked the workhouse, demanding that the master fed them, or they would march him around the town with a stone hanging from his neck.  This really was revolution in backwater Norfolk.

Then I read the names of the accused at the subsequent trial:

For their breach of the peace, and for having broken into and entered the vestry room of the parish church ... and for having beaten the Rev. Fairfax Francklin ... threatened him and kept him a prisoner for several hours', Robert Smith was imprisoned for two and a half years, Samuel Smith for two years....

and after that was decided he (witness) would communicate the result (to the labourers); saw Robert Smith with a mattock ; a cry was raised...

Hang on.  Is that my 3rd great grandfather Robert Smith of Attleborough?  It appears so.  That hint twenty years ago.  He was married only three years earlier, to Lydia Hewitt - by the Rev. Francklin!  No wonder they didn't have any children for a few years.  He was serving time in Norwich Castle. 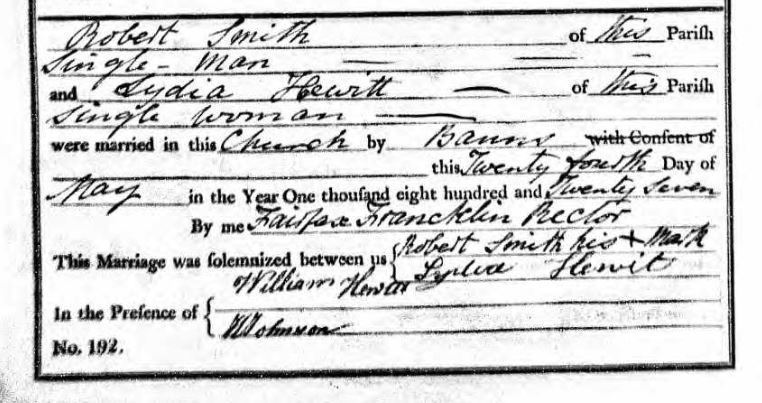 Robert was born the son of Raphael and Mary Smith, in Attleborough during early 1807.  At least three generations had lived in Attleborough, perhaps many more.  Indeed, both of his parents carried the Smith surname previous to marriage.  The Samuel Smith convicted with him may have been a cousin of his.  Robert must have been around 24 years old when he raised that mattock at the parson.  He had two young children to feed and a wife.  Times were incredibly difficult for the poor.  I wonder if he was behind the voice that was reported during the Attleborough Riot by a witness:

That was the voice not of a mob rioter, but of a revolutionary.  Not just the beating up of an elderly parson perhaps.  It had to be nipped at the bud, and after the military declared the Riot Act, the magistrates did just that.

While Robert languished in the gaol of Norwich Castle, his younger brother, Raphael Smith, passed away age 21.  Tough times to live.

Robert was released and fathered several more children.  In 1841 he was living at Lydia's father's farm at Hill Common, with six of their children.  But Robert was diversifying.  He was recorded on that census as a hawker - a salesman.

Three years later, in 1844, Robert's wife Lydia past away, age only 37 years.  In 1849, with children to care for, Robert married a second time, to a widow named Frances Saunders (nee Husk).  Her children by her previous marriage joined the household.

In 1851, Robert, living still in Attleborough with his family, was now working as an umbrella maker!  Then something happened.  The railways had arrived, bringing opportunities for many poor Norfolk families to move away.  The cotton mill towns were beckoning.  Robert, in his fifties, and Frances, left my 2nd great grandfather Robert Smith in Attleborough, and moved up North to Sculcoates, East Riding, Yorkshire.  In 1861, there they were, until 1870 when Robert finally passed away.  The Man with the Mattock.

Meanwhile his son Robert Smith (the junior) did quite well in Attleborough.  He was a bricklayer.  He had a trade.  He married Ann Peach (who's own father had been transported to Tasmania in 1837 for stealing cattle), and they for many years ran a beerhouse and builders yard in Attleborough, called the Grapes.  Their son Fred Smith also apprenticed into a trade.  He became a wheelwright, moved to Norwich, where he met my great grandmother Emily Barber.  They had several children in Norwich, including my grandmother Doris Brooker nee Smith. 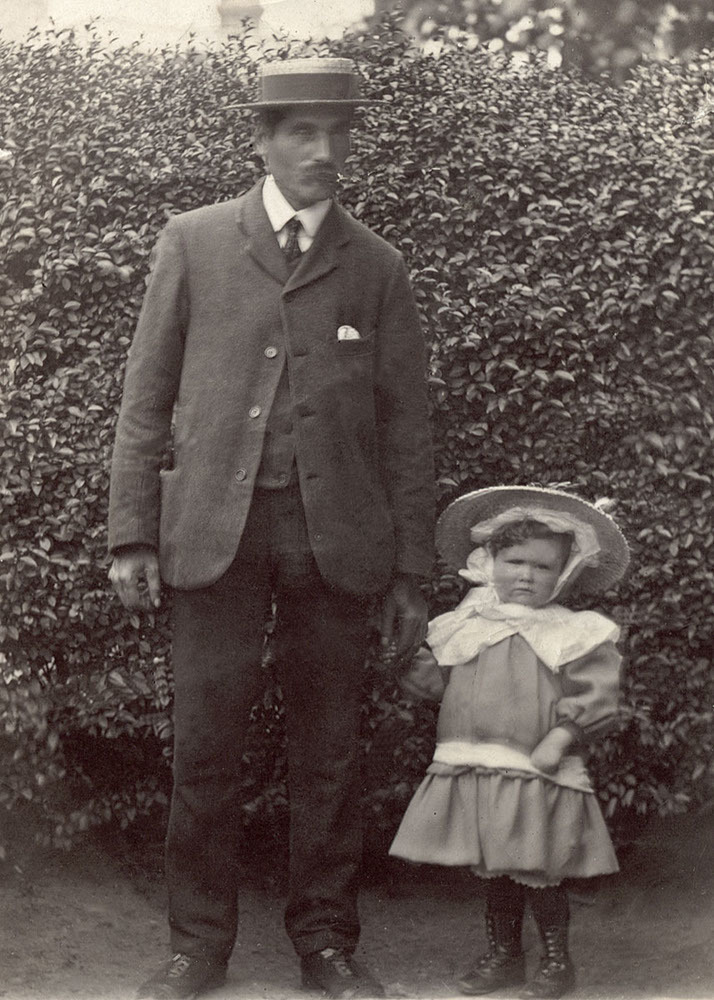 Fred Smith with his daughter Doris in Norwich circa 1908. 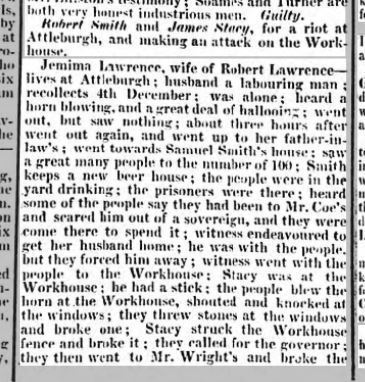 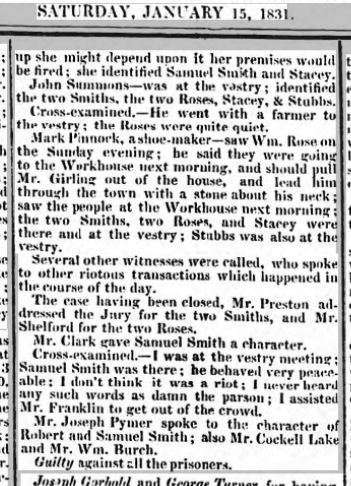