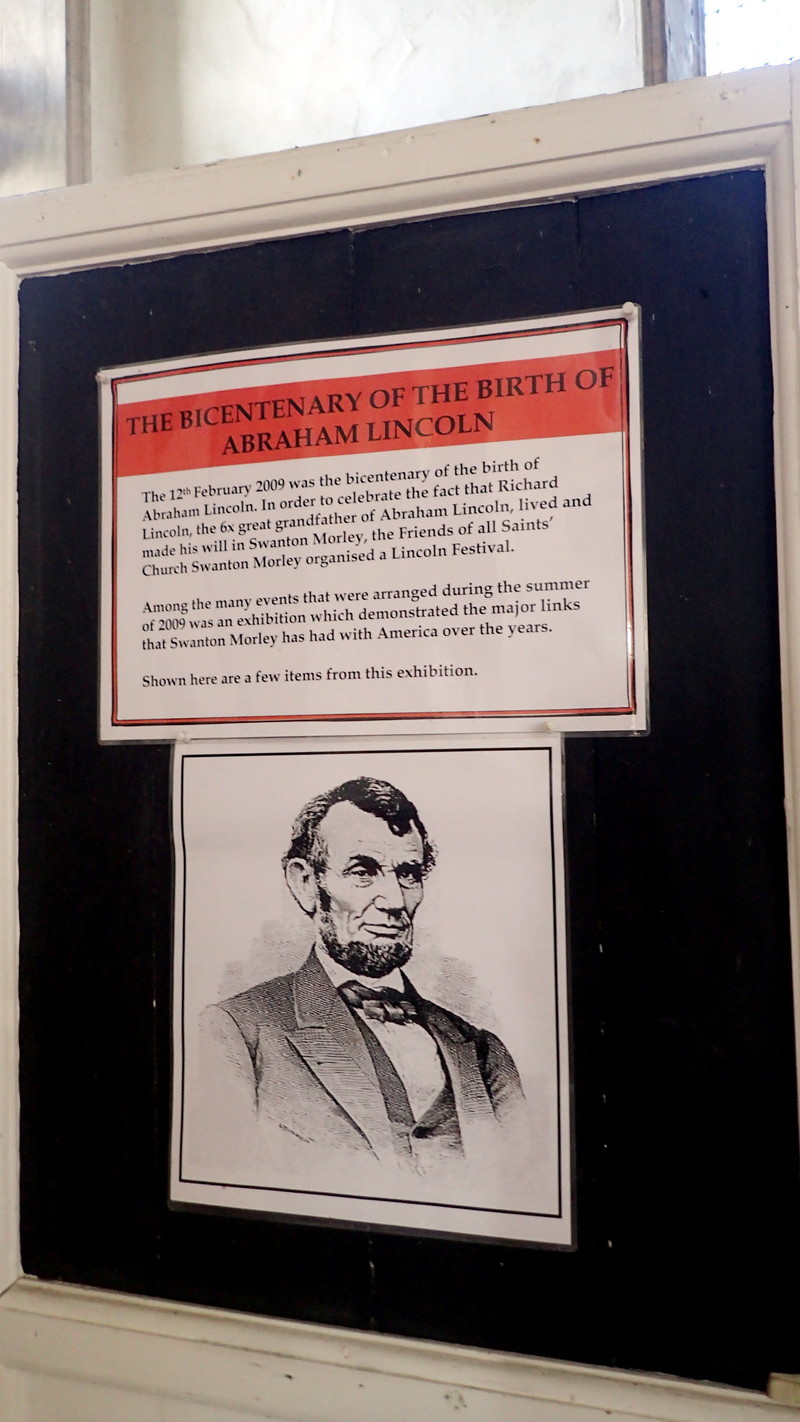 Okay, honesty time.  I have (not yet) found any proven connection between myself and the 16th President of the United States of America, Abraham Lincoln.  The title is a little tongue in cheek, but it's my blog, and I have a serious dearth of famous ancestors in my recorded family tree.  What I have recently discovered though, is that the Norfolk village of Swanton Morley is an ancestral hot spot on my father's side, and that the paternal ancestors of Abraham Lincoln, did indeed also hail from that village.  Therefore it is not unreasonable to speculate, that at some point since the Medieval, we do indeed share ancestry with the 16th President of the USA.  Lincolns did indeed remain in the parish until modern times, along with my Harris and Barber ancestors. 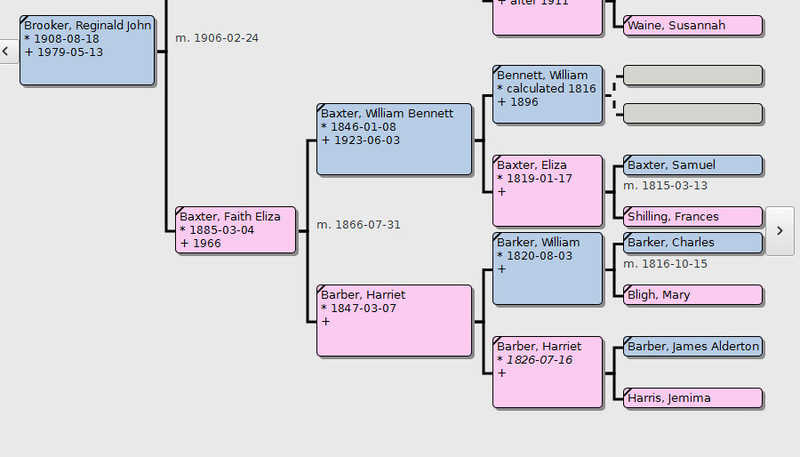 My grandfather's parents separated while he was young, and he was brought up at Northall Green Farm by his maternal grandparents William and Harriet Baxter.  When he was a boy, he would play by hanging by his arms from the nearby railway bridge.  His older sister Gladys would sometimes be allowed to visit.  She remembered happy times and yellow flowers on that farm.  Northall Green Farm is technically in (East) Dereham, but is actually located nearer to the village of Swanton Morley.  Many of his genes from his mother's side really had not travelled far.  He had some very old ancestral associations with his home - both in East Dereham, and in Swanton Morley. 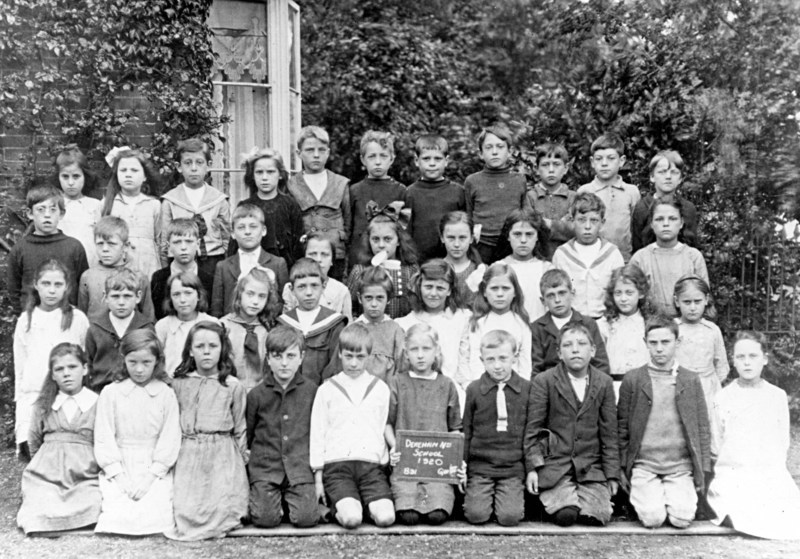 Reginald as a boy in 1920.  He is on the second row from back, on our far left.  Standing, plain dark top, round spectacles.

His mother's side of the family also had an undesired association with the nearby Mitford & Launditch Union Workhouse at Gressenhall.  His grandparent's that reared him, had both been born in that workhouse.  They had both been born illegitimate of unmarried mothers.  However, I recently discovered that they both claimed to know and to name their biological father's on their marriage registration.  His grandparents married at the church in Swanton Morley.  As I was to discover, many of the bride's ancestors at least, had previously processed through the same building over the centuries.

Harriet (my great great grandmother) claimed at her wedding that a William Barker was her biological father.  He was from a Dereham family.  I'm not chasing up that line for now, instead, lets go up her mother's line.  Her mother was Harriet Barber, born 1826 in ... Swanton Morley.  Harriet disappears after the birth of her daughter.  Hopefully she went on well in life, perhaps married and changed surname.  In 1847, she would have had to wear a yellow jacket of shame in Gressenhall Workhouse.

Harriet's father in turn had also been born illegitimate - a feature of incredible frequency in this particular line of our family tree.  What prompted such illegitimacy?  Was it poverty?  He (my G.G.G Grandfather), was born in Swanton Morley in 1803, the baseborn son of Sarah Barber.  His name was James Alderton Barber.  In adult life, he tolled as a farm labourer in the Swanton area.

His mother actually had no less than six children born in the village of Swanton Morley between 1803 and 1818, whilst somehow avoiding marriage!  Neither do they all appear to have had the same father.  a Mr Alderton may have fathered two including our ancestor.  A Mr Sissons at least one other (a common custom in illegitimacy was to give the biological father's surname as a "middle" name).  Maybe I should try to chase up and eliminate which local Mr Alderton was likely to be our ancestor, but such trails are tenuous.  I really don't know how she survived in this early 19th Century rural community.  I sniff a fantastic story, if only I could dig it up.

However, lets go back down to her son, James Alderton Barber of Swanton Morley.  He married at least three times.  Perhaps making up for his mother.  His second marriage in 1825 was at Swanton Morley church to our ancestor Jemima Harris. 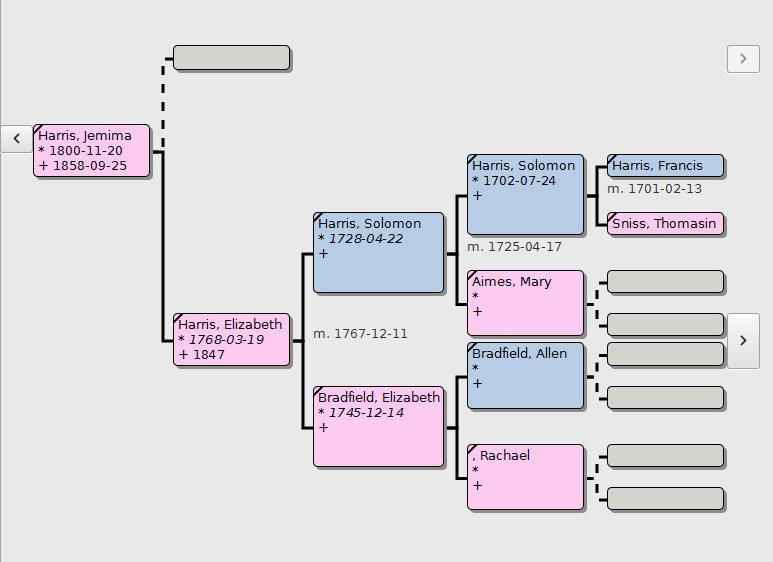 James and Jemima Barber were to go on to have no less than eight children baptised at Swanton Morley Church between 1826 and 1842.  Jemima herself, my G.G.G Grandmother, was born ... you guessed it, illegitimately ... the daughter of Elizabeth Harris of Swanton Morley.  I really find it fascinating, the level of illegitimacy on this line.  A local socio-economic history would be very interesting.  This family is full of mothers, rather than fathers.  They may have been strong and independent.  Or they may have been victims.

G.G.G.G Grandmother Elizabeth Harris herself was baptised in that same church in Swanton Morley in 1768.  Her parents had narrowly avoided yet an earlier illegitimacy event themselves by marrying a few months earlier - at Swanton Morley of course, in 1767.  They were Solomon Harris and Elizabeth Bradfield.  We're going back now aren't we.  Swanton Morley is starting to feel as one of our many genealogical homes.  Hey, I still live only around 15 miles away from there today. 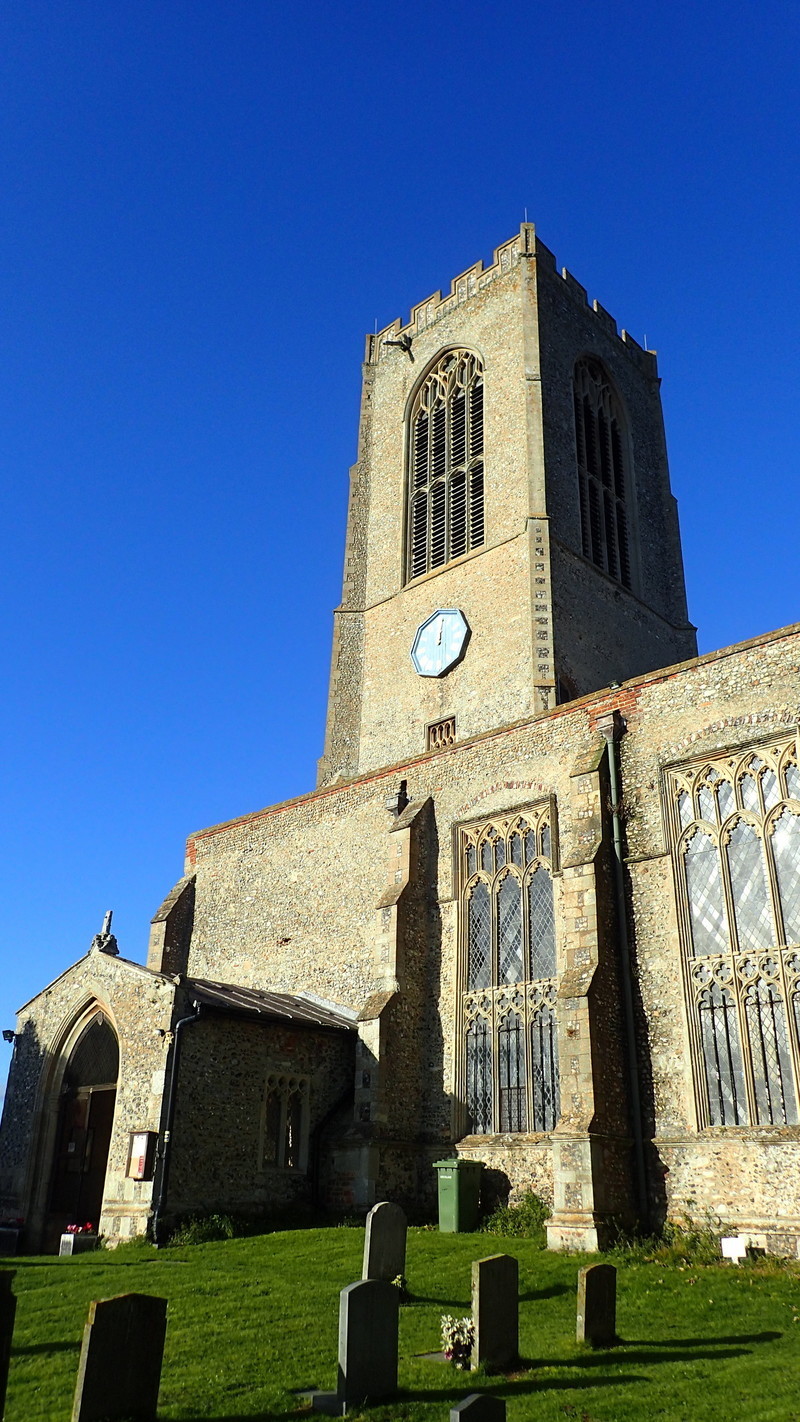 Here she is today.  All Saints Church, Swanton Morley, Norfolk.

I only know of two children of Solomon and Elizabeth Harris.  Our ancestor Elizabeth, and her sister Martha.  I hope their parents had a successful life.  Back then, life was far more precarious than it is today.  Okay let us step back another few generations.  Elizabeth was baptised in nearby East Dereham in 1745.  The daughter of an Allen and Rachel Bradfield.  What great names!  As for Solomon, he turns out to be a Solomon Junior.  He was the son of Solomon Harris and a Mary Aimes? of Swanton Morley.  Solomon Senior married Mary at Swanton Morley in 1725.  I'm not sure of her maiden name.  The hand ascribed registers are so poor - Aitkjens?  I've gone for Aimes.  They had at least three children baptised at All Saints, Swanton Morley between 1725 and 1736.

Solomon (senior) was himself baptised at this same church in 1702.  He was the son of my G.G.G.G.G.G Grandparents Francis Harris and Thomasin Sniss?.  They were married at Swanton Morley in 1701.  Francis must have been pushing it a little, as it appears that he had married a Susan Thirston in Swanton Morley in 1682.  He was recorded as a wiidower at the marriage to our ancestor Thomasin.

Francis himself?  I can see earlier Harris's in the Swanton Morley registers - but just when I think that they just might record Francis's baptism - they fade and blur.  So I can speculate - but not link. They were in the Swanton Morley area at the same time, at least for a few centuries, as Abraham Lincoln's ancestors.  Hey - there are those undeclared paternities.  I don't want to spread rumours.  But did our family play a part in the making of the USA?