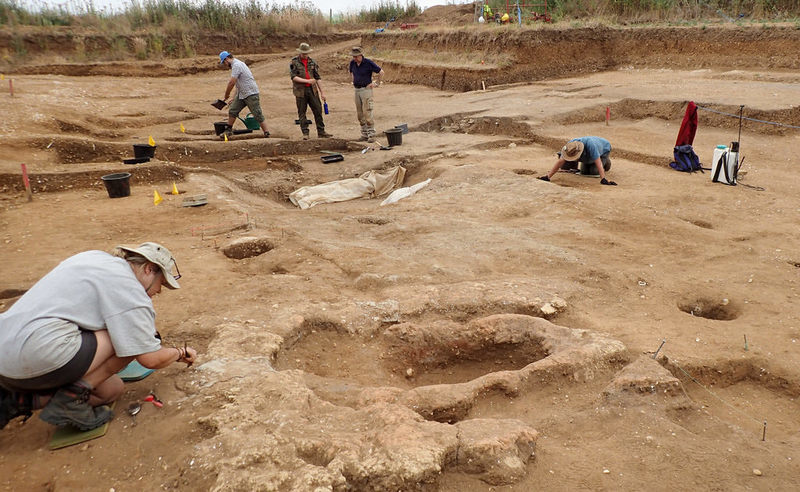 July 2018 - I recently completed a BERT (Basic Excavation and Recording Techniques) Course in Archaeology at the SHARP Project in Sedgeford, Norfolk.  I've been interested in archaeology for decades.  My interested probably kicked off during the early 1970's when as a kid, I witnessed a number of excavations around my father's shop in Norwich.  Around 16 - 21 years ago, I was a keen amateur archaeologist.  I studied part-time for two years with the UEA, and gained a certificate in "Field Archaeology & Landscape History".  I contributed as a volunteer field-walker, or as I liked to call it, surface-collection surveyor.  I carried out a one man survey of over thirty compartments with disturbed soils in Thetford Forest.  Here is a link to the web archive of my old project website Thetford Forest Archaeology.

My main interest was in survey methodology, late prehistory, and in British lithics.  However, Life moved on as it does for me.  Years later, I look at the SHARP (Sedgeford Archaeological & Historical Research Project) website, and spot their course, BERT (Basic Excavation & Recording Techniques).  I remembered field-walking for a day at Sedgeford, with the UEA group, around 19 years ago.  The Sedgeford Project was still up and running after all of these years!  I'd never excavated before.  I liked field-walking as it gave me independence to carry out all aspects of the project.  But even though I had a long term interest in archaeology - I'd never myself, as much as lifted a trowel at a dig.  Time is moving on - I decided to add it to the bucket list of life, and to execute it.  I signed up for a BART Course to commence and run for six days in July 2018.  This is what I experienced. 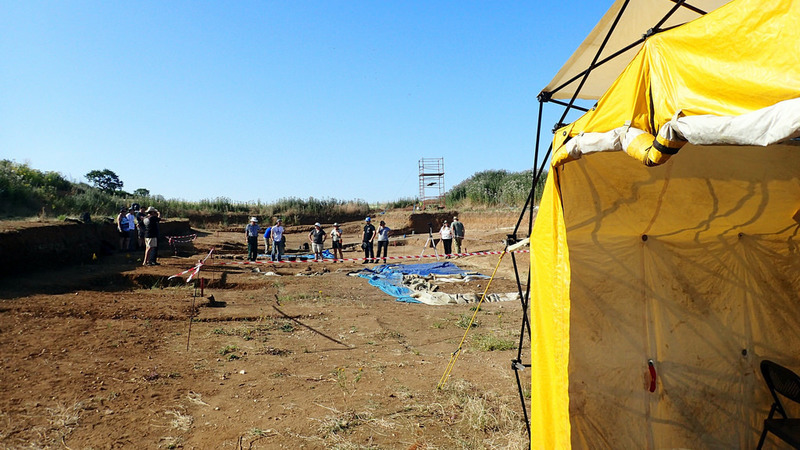 SHARP (Sedgford Archaeological & Historical Research Project) is a project both to a) deep research over a long term period, one English village parish, set in the North West Norfolk landscape - using multiple archaeological and historical research methods, and b) in democratic archaeology, where locals, members of the public, amateurs, students, enthusiasts, and volunteers can contribute to and become involved in a high quality research project.  Archaeology is demystified, as volunteers often gain enough experience to become supervisors and trainers at the Project themselves.

I'd say that they have achieved both of those goals, and over an incredible 23 year period - and still going strong, with plenty of excavations and other research possibilities to keep them busy in that one small Norfolk parish, for many years to come.  Indeed one very important lesson of SHARP - is that Sedgeford is just one rural East Anglian village parish.  Not particularly special.  Out of some 1,200 or more East Anglian parishes.  Yet it has proven to provide decades of research and opportunities.  For those that believe that Archaeology is all done and dusted, think again. 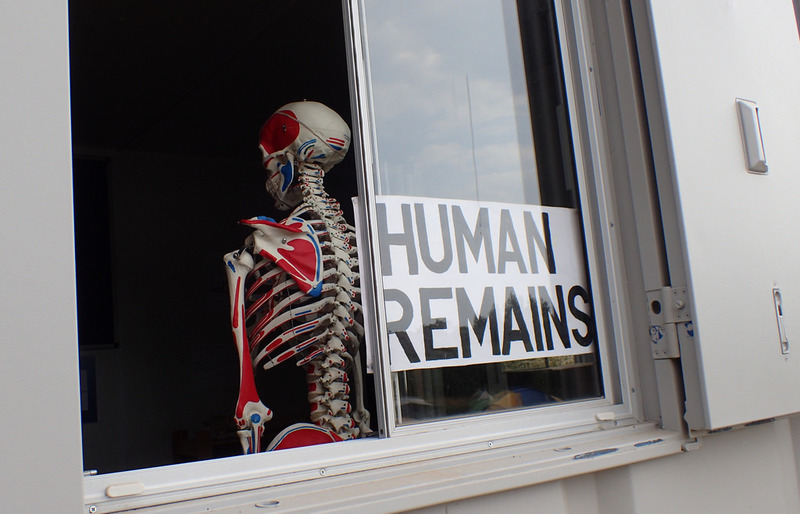 The setting.  Sedgeford, a parish in the north west corner of the East Anglian county of Norfolk.  A few miles from the coast of the Wash and the North Sea.  July 2018.    A small stream passes through the village.  In past times, it was a navigable stretch of Heacham River.

The UK has been in a drought for several weeks, and are in what the media refer to as a "heatwave", the hottest and driest for over forty years. 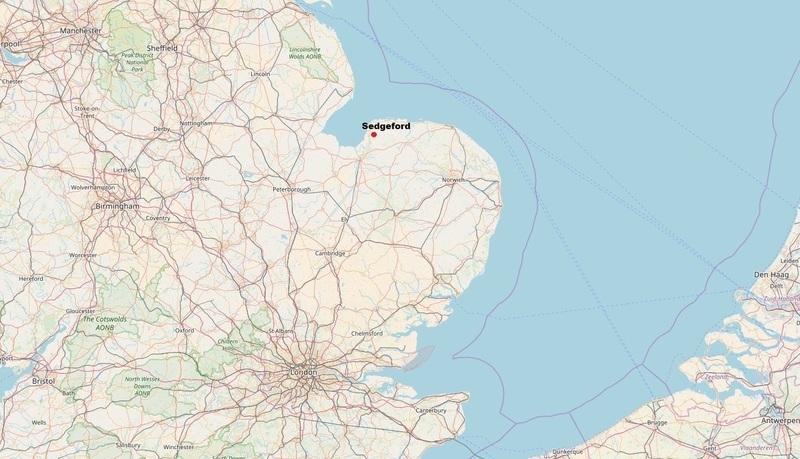 Above image copyright from openstreetmap.org.

I purchased a place on the BERT course at the off-site rate (GBP £290).  Full Rate On-Site (GBP £430 - there is also a concession rate) would have entitled me to a pitch in their camp, as well as to evening meal, evening community activities (some of which may require a further fee), and to breakfast.  I know that I was missing out on that aspect of the SHARP experience.  During the week, evening activities included a quiz, a game of cricket, a lecture, and at the end, a storytelling evening followed by a punk rock act!  However, as my interest was in the archaeology, I couldn't justify the extra cost when I could drive home to sleep and rest each evening.

There were a number of things that I was notified of that I needed: a few basic tools, including an archaeology trowel, a leaf trowel, a plumb bob, line level, pencils, 5 metre steel tape, a broad rimmed hat, sun lotion, etc.  Of those, the most essential were the archaeology trowel, pencils, the hat, and sun lotion.  In addition, had I known, I would have brought a pen, a drink mug, food dish / bowl, and knife and fork.

I arrived around 07:15 on Sunday morning.  I had missed out on an induction held for the campers the previous evening.  I could have got there a bit later, maybe 08:15.  The SHARP community schedules the morning meeting in their central marquee tent for 08:20 Sunday - Friday.  I would reiterate, that this is a democratic project, and that there is a strong communal feel to the camp.  I met some of the supervisors, and a few other BERT students, one that kindly lent me some cutlery for the day (do take your own).
First session - Health & Safety on site induction.  There is no mobile plant on site, the main hazard being the hot weather.
Second session - straight into it!  To the current excavation, Trench 23, and first instructions on excavation trowel work.  This was a bit of a pleasant surprise.  SHARP pride themselves in this sort of approach.  Whereas many commercial digs are renown for exploiting volunteers to do the dirty work, this project straight away starts to involve the novices.  If I had actually made a significant find during that first session, I feel sure that with supervision, I would have been allowed to fully excavate and explore that find myself.  This project demystifies the techniques, and enables volunteers. 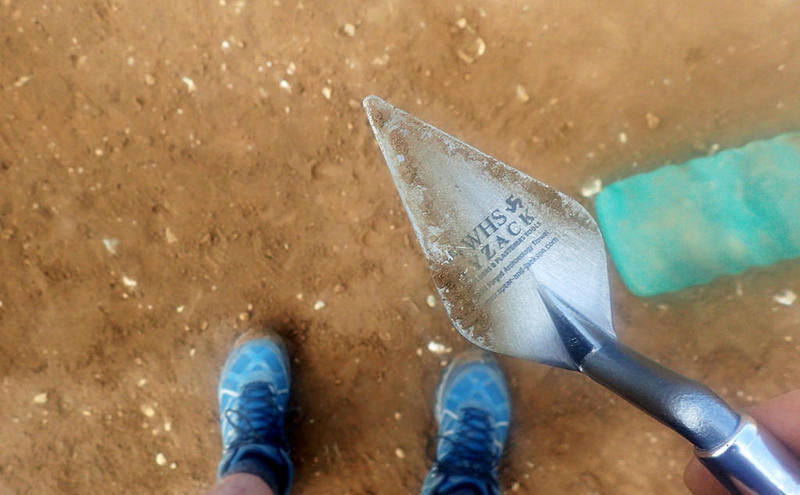 Above image - my brand new trowel broken in.
A bit now about the Trench 23 Excavation that we were training on.  Sub soil features were initially indicated by magnetometer survey.  Top soils were removed a few seasons ago, and the trench (as pictured in some of the above images) had been worked down to a Middle Saxon layer.  Almost all of the pottery recovered in this level was Ipswich Ware, the typical ceramic of the Middle Saxon (or Middle Anglo-Saxon period if you prefer) in Eastern England.  This heavy, gritty, wheel-turned grey-ware was fired in kilns located in Ipswich, Suffolk, between around 625 AD and 800 AD.  This site was securely dated to this period, which marks the return of Christianity to Lowland Britain, as it was finally embraced by the growing Anglo Saxon kingdoms of East Anglia, and Mercia. 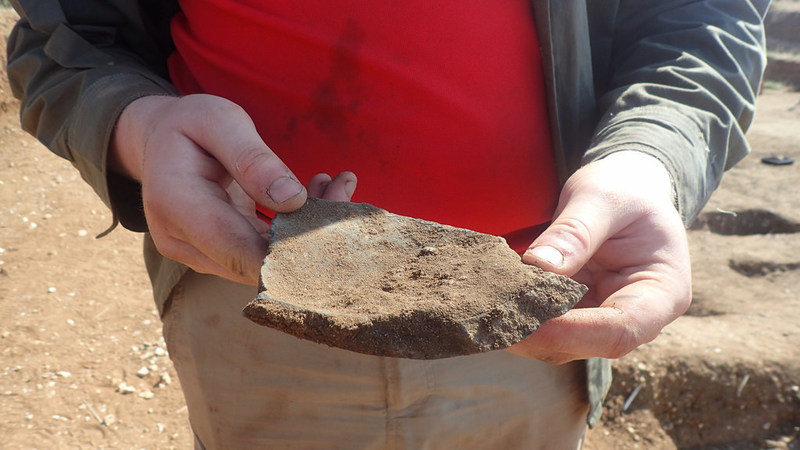 The main features that excited the geophysics surveyor turned out to be the foundations of two kilns or ovens, dating to the Middle Saxon period.  The working hypothesis was that these ovens, along with the other features that included working floors, post holes, and at least one cistern feature, as well as a midden, and burnt charred grain from barley and rye, could represent a malt-house complex.  If this is the case, then it could be the first ever malt-house yet recorded from Anglo-Saxon Britain. 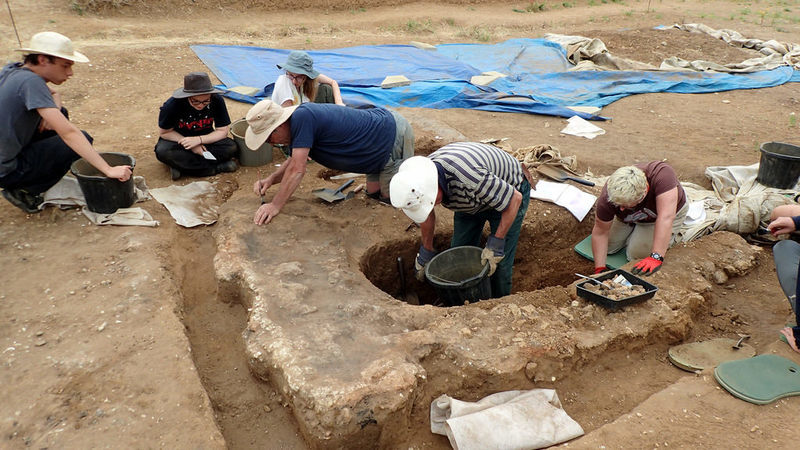 Third session.  In a mobile classroom for basic recording and context technique training.  Excavation, stratigraphy, colluvium, turbulation, Harris matrix, and other subjects were also introduced, as well as the "context form".
Fourth session.  The World Cup Final was scheduled, and a lot of the community including some BERT students were excused to watch the Final between France and Croatia on a screen.  I wasn't particularly interested, but keener to have more time in Trench 23 on the trowel work.  Out in the baking sun.
Day ended 17:00.  It felt good.  Time to drive home.

Back on site for the 08:20 morning meeting.  Coffee.
Recap and we are issued with our BAJR (British Archaeology Jobs Resource) Archaeology Skills Passport.  A booklet in which you can collect signatures from supervisors, as you accumulate skills and experience.  A well signed passport is key to gaining placements on more excavations that welcome experienced volunteers.
Then we were back onto Trench 23, this time for training in the survey and recording of a trench section.  Got to play with plumb bob and line level.  Similar to my training with the UEA years ago in surveying an earthwork - only inverted into a trench section.  We were also tasked to actually start identifying changes in soil colours, textures, inclusions - to distinguish an actual soil stain.  We recorded our section on a scale of 1:20. 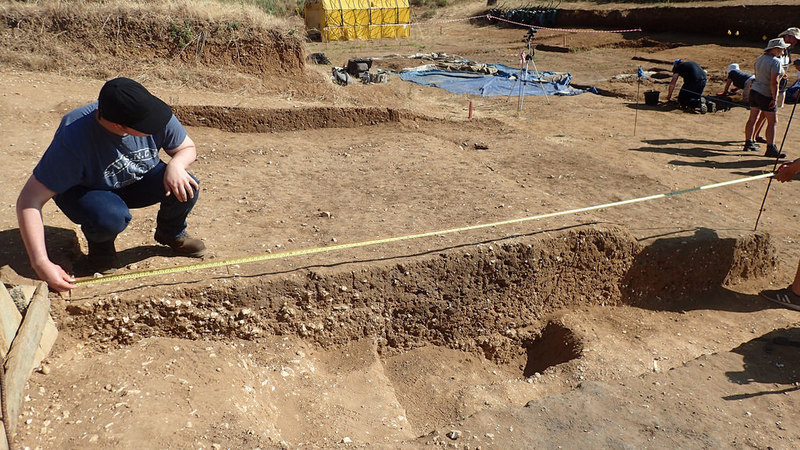 We were introduced to the safe use of a mattock to clean an area of trench.

Next session was Bulk Finds - cleaning and treatment of different materials such as daub, bone, shell, ceramics, etc.  We were taught to systematically keep bulk find trays with context tabs. 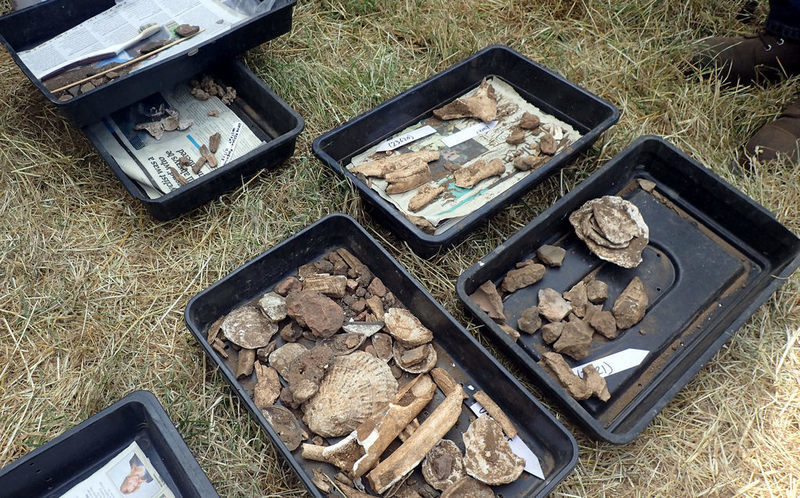 Some more trowel work in Trench 23.  Practical assessment of the ability to plot a plan of a trench and features. 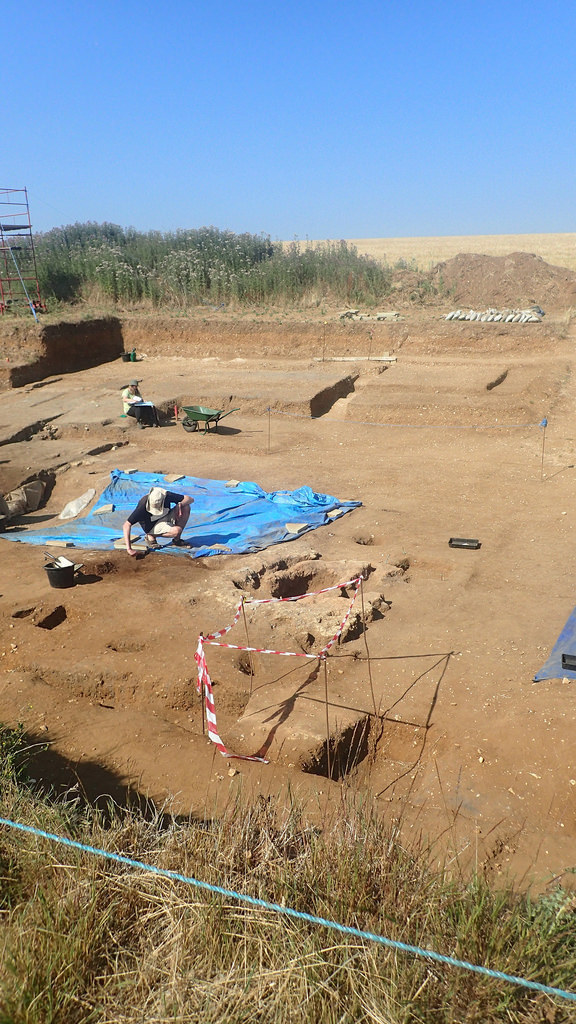 Training with a Dumpy Level - in order to record height of excavation features and small finds. 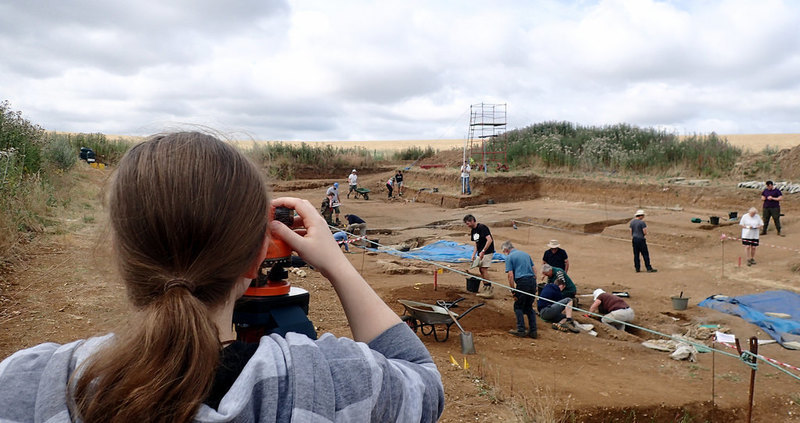 Training in site photography.  How to clean and prepare a feature such as post holes, take photographic records, fill in the photography register, use metre sticks, context boards, etc. 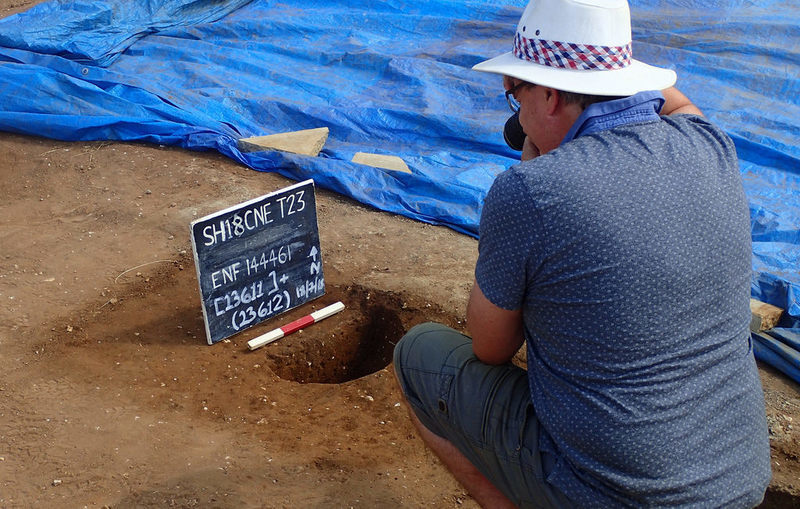 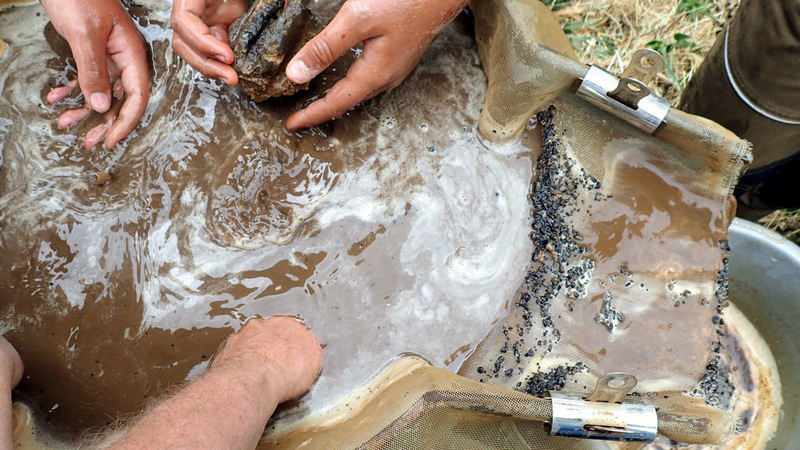 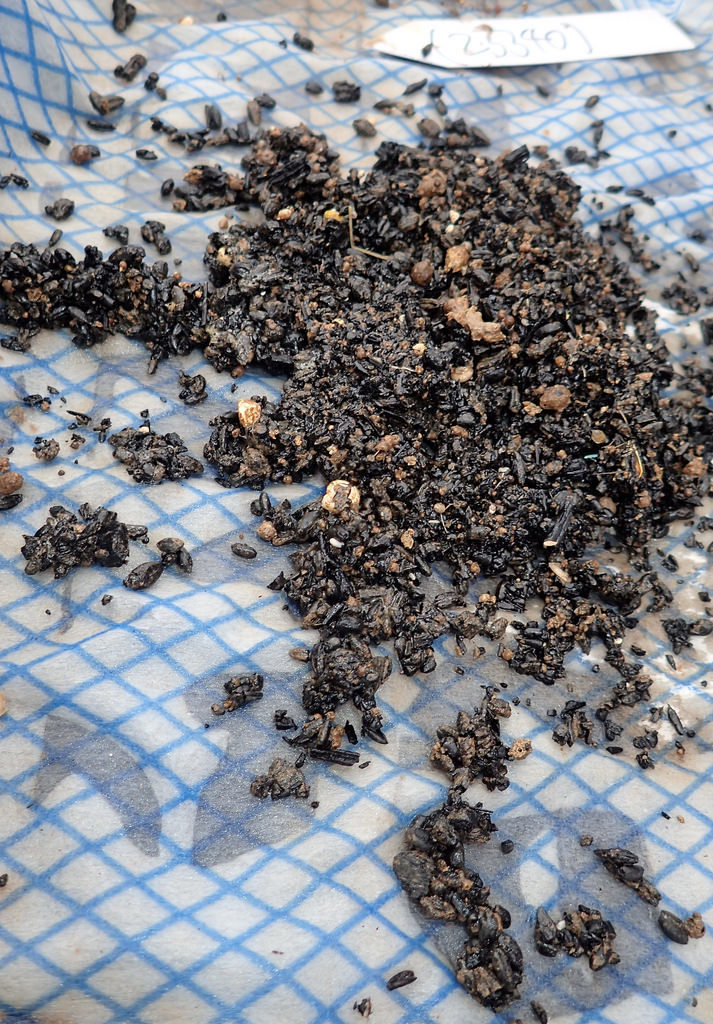 I and another student, Anna, were asked to excavate a sondage on the edge of Trench 23, in order to test if a Saxon dated drainage ditch continued in that direction.  I particularly took great joy in that work - but so hot in the heat-wave.

We had a recap on excavation recording.

An introduction to geophysics and non-intrusive archaeological methods.  As I studied non-invasive archaeology with the UEA for two years in the past, this was like a recap and update for myself.  However - we got to play with a magnetometer (flux gradiometer) out in the field, which was certainly a new experience. 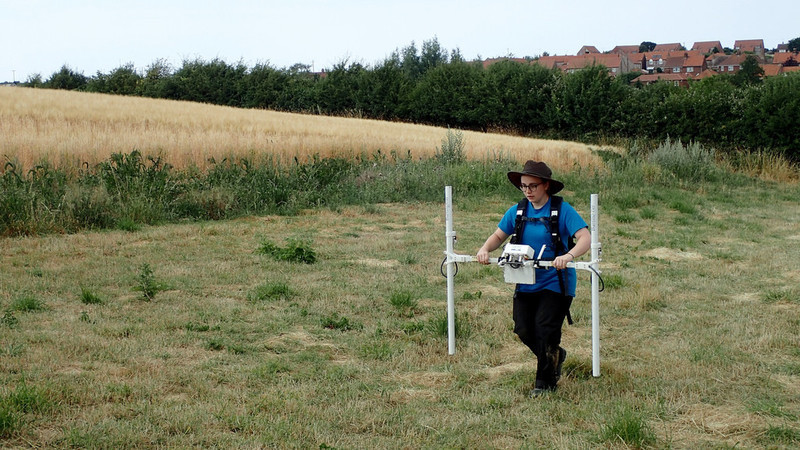 We also had an introduction to reporting.  Each week, the new crop of BERT students have to complete a new section of a report for the Trench 23 excavation.

I was allowed to complete my beloved sondage trench, and yes - it revealed the soil stain of the Middle Saxon ditch: 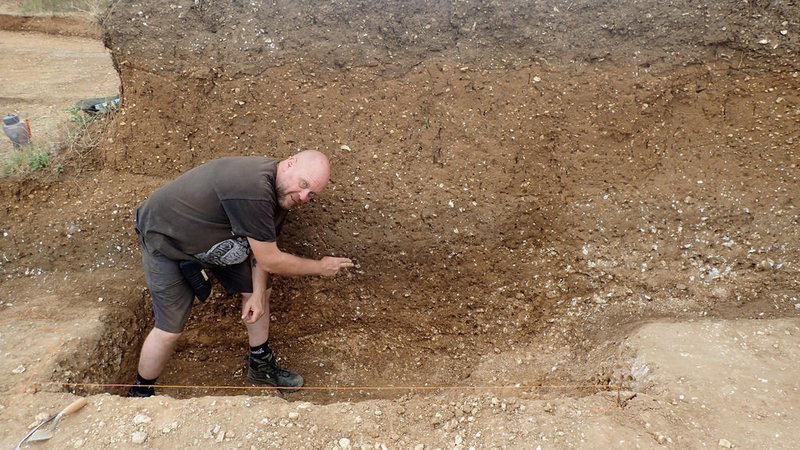 We were presented our BERT certificates.  With another student, I was tasked to guide some members of the public visiting the excavation.  We got the thumbs up from a supervisor.  At close of the week some of us made a presentation to the SHARP team about what we had been learning. 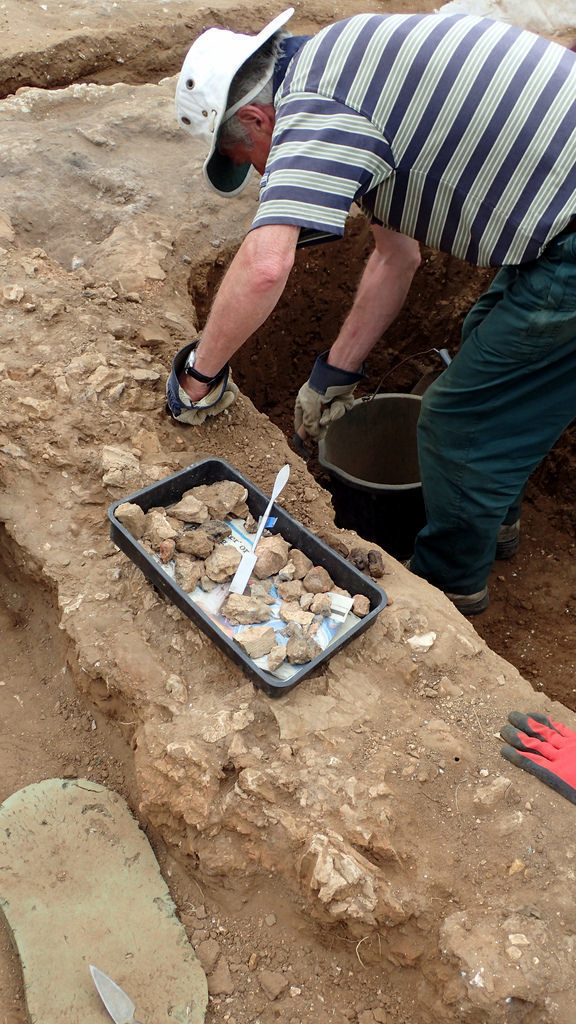 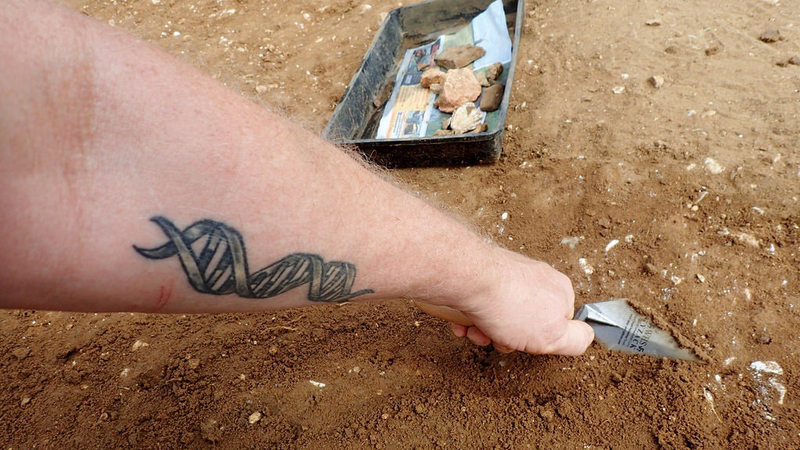 It wasn't just trowel work, site photography, dumpy levels, or even flotation that I learned about and experienced over the week.  What I also discovered were human stories and community.  I saw a sort of collectivism in action, in the form of People's Archaeology - individuals helping each other up.  I enjoyed the work.  I enjoyed meeting like minded people on their own journeys.  So much so that I'm looking forward to returning next summer as a volunteer at Sedgeford.  Last day was actually emotional. 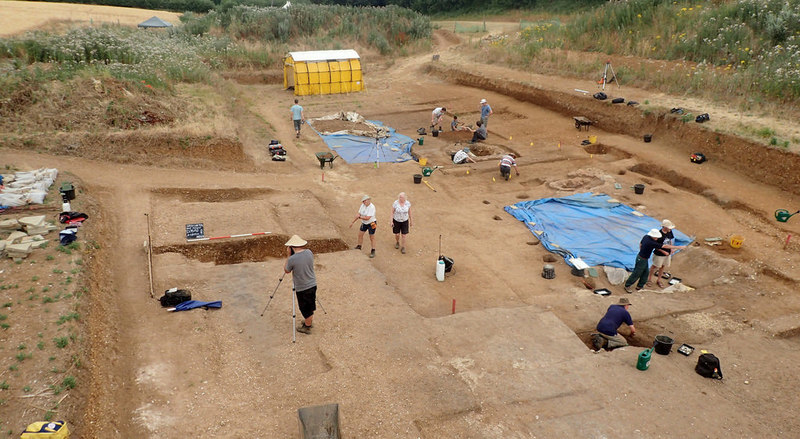 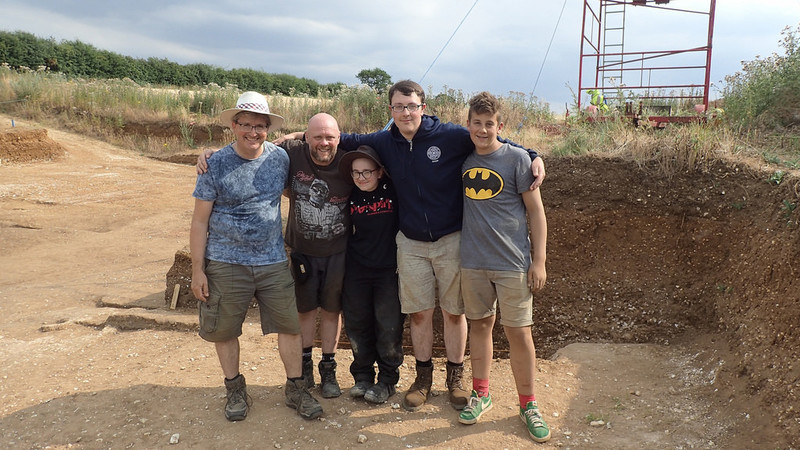