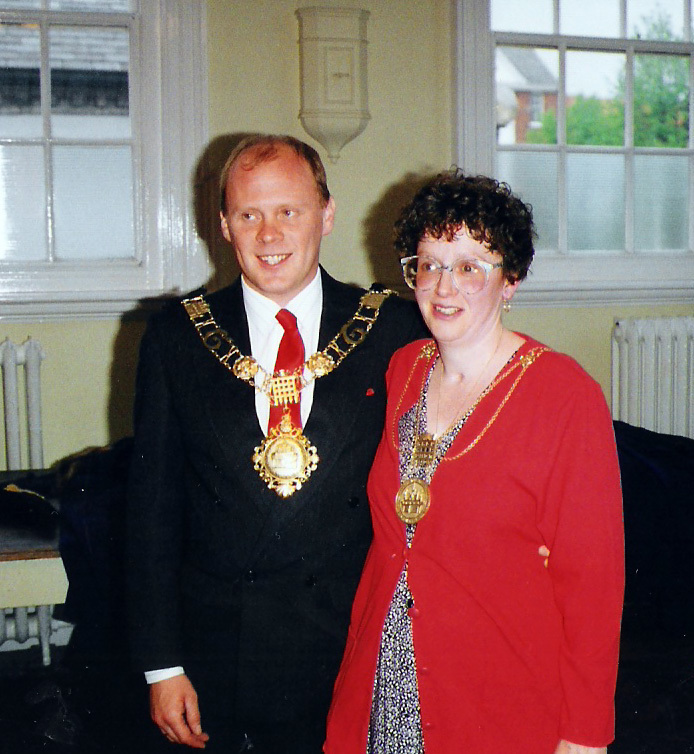 Yup, this is myself and the ex, in 1995.  I was in my early thirties, and somehow I became involved in local mainstream politics.  The red tie not so subtly betrays my party affiliation.

I don't really talk much about those days, or how I ended up as a mayor of a small English town for a term.  How and why does someone become political?  What is it in their nature or upbringing that drives them into that direction?  There was no hint of it at school age.  I wasn't really the most politically aware  kid on the block.  Neither did I grow up in poverty, desperate to climb out and to make my mark.  If I think deep, there was a sort of a sympathy with the underdog, and perhaps I was taught a sense of fair play.

If I'm to be honest with you, I pretty much discovered socialism and Marxism very suddenly and energetically in my early twenties, and became a born again revolutionary.  I spent a year or two playing at revolutionary politics, then did what society programmed me to: work more hours, pay tax, get married, raise children get a mortgage, die.  I skipped out on the dying bit when I hit a damaging mid-life crisis.  For the time being any way.

But somewhere in that process, I still craved a bit of political action.  I lived in a little town in Norfolk, there was no revolutionary presence.  So I instead joined the local branch of the Labour Party.  This was still in the days of Clause 4.  Full of zest, I took part in stupid games between cliques, knocked on doors, attended meeting after meeting, every working party of every sub committee.  I took office within the branch and constituency, levered support from my trade union.  Part of that progression involved standing for public office.  I indeed stood for a seat on the local town council.  Against all expectations, I lost to a Tory candidate.  The next day at the branch post mortem, someone looked at the mathematics, and it didn't add up.  There was a miscount.  An excuse for a political campaign, the branch took it to the High Court, then to the Old Bailey.  Ballet boxes were opened, and a gross but basic mistake spotted on the top, on a totting up note.  I was declared rightful councillor, and the poor Tory candidate booted out.

The above photograph was taken early into my second term as a councillor.  I had also won a seat on the District Council.  I was made the mayor of Thetford.  Maybe more on that experience, and my subsequent views on the state of local democracy in England in a later post.