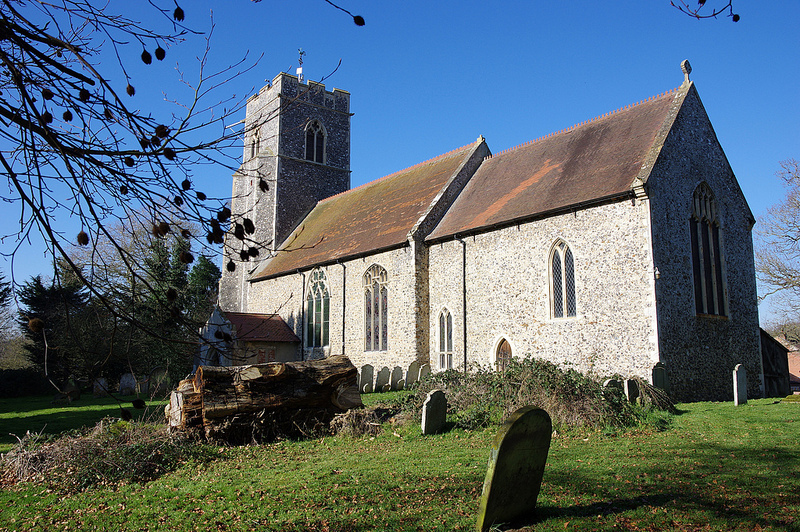 I had to recently confess to another researcher, that I had made an association, between two generations, based only on circumstancial evidence.  I had the below image, a marriage between two of my 4th great grandparents at Postwick All Saints in 1825: 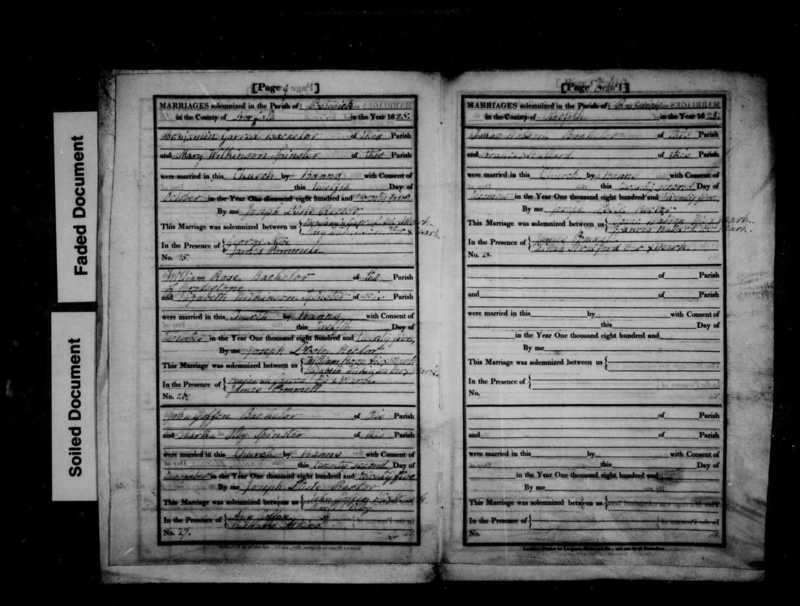 William Rose, singleman, groom, of Bradeston, with Elizabeth Wilkinson singlewoman, of Postwick.  Bradeston was a parish nearby, between Brundall, Blofield, and Lingwood.  Today, it only consists as a hall farm, and as a church, the church of St Michael's and All Angels: 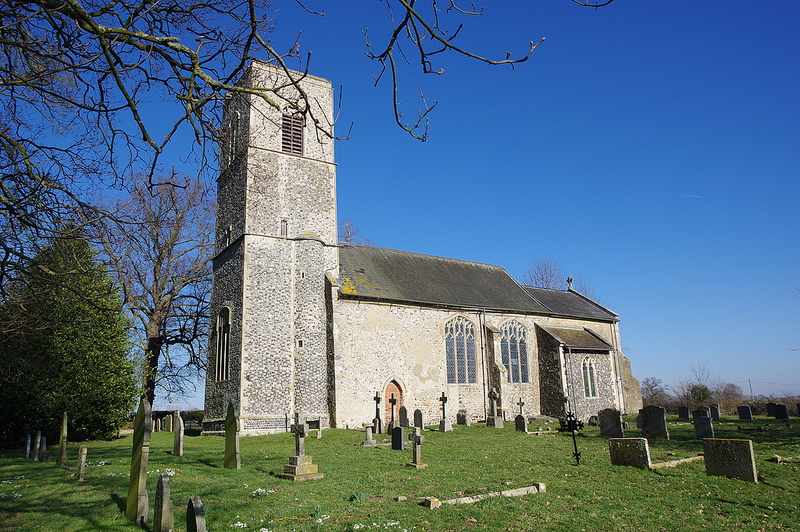 But as for Elizabeth Wilkinson's origins, I couldn't find her baptism online.  However, between Ancestry.co.uk, Findmypast.co.uk and FreeReg.org.uk, I did discover that there was a Sarah Wilkinson living in Postwick, that had four daughters baptised there (illegitimate) between 1806 and 1816.  Census records suggested that Elizabeth would have been born at Postwick, around 1803.  I hadn't seen a lot of Wilkinsons in the area, so I dared to make the assumption, that she was an earlier daughter of Sarah Wilkinson.  Naughty I know, but I just felt it so likely.

But then when challenged for the source, I felt that embarrasment of taking a short cut.  The problem with Online Genealogy is that it's easy to assume that all records are there.  They are not, not even for Norfolk, that has a good online presence in parish records and transcripts.  So it was time to get off the computer, and take a look.  I did this yesterday.

First two stops were at Postwick and Bradeston churches, to take the photographs for this post, and to get the feeling for them.  I was pleased that the marriage recorded that William Rose was of Bradeston, because my William Rose was of Brundall.  It's only a half of a mile from Bradeston, indeed, it has been absorbed as a deserted parish, into Brundall.  It supported that I had the correct William & Elizabeth Rose, the recorded parents of my 3rd great grandfather Robert Rose, who was baptised at Lingwood in 1829.

Then I drove a few miles to the Norfolk County Archive at County Hall.  I soon located the correct microfilm.  It covered baptisms leading up to 1813.  Perfect.  Within five minutes, I located the baptism of my 4th great grandmother at Postwick: " Elizabeth, daughter of Sarah Wilkinson, was born & bapt' February 19th 1803 ": 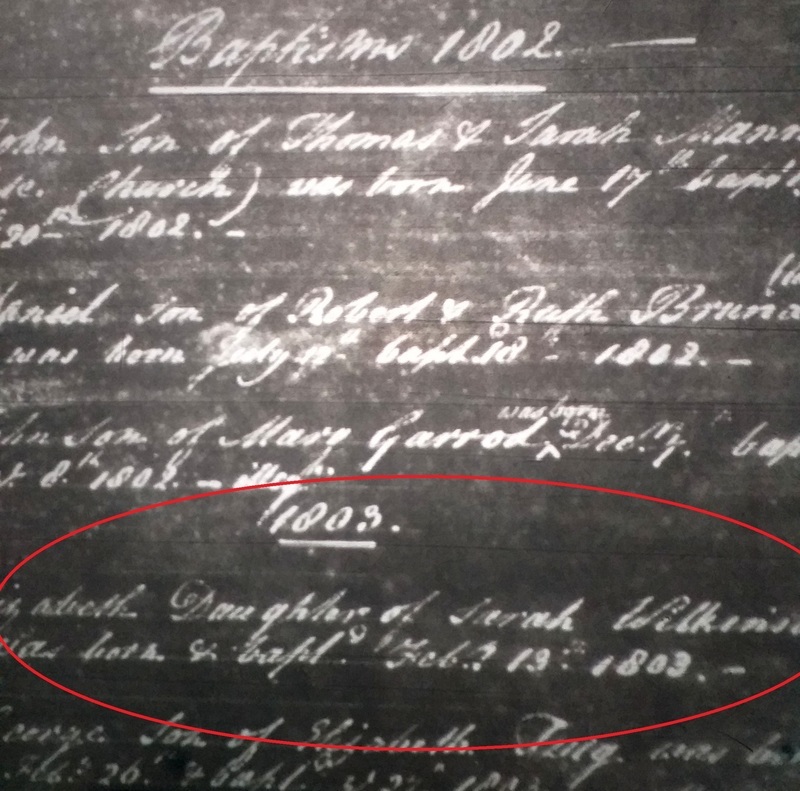 There she was, and I was correct, she was an earlier daughter of Sarah Wilkinson.  Not only that, but further along the roll revealed another two daughters of Sarah.  In all, she had six daughters born at Postwick, between 1803 and 1816, all illegitimately.  I've seen a single parent family like this before, but on my father's side in Swanton Morley, Mid Norfolk.  The full story we will probably never know, and it would be wrong to judge.  Very often poor young women suffered from terrible brutality.  Sometimes, this may have matured into a level of independence.  She may have even had partners, or a long term lover.  We don't know.  Illegitimacy was far from rare in 19th Century Norfolk amongst the rural poor.  But when you see a family like this, you do wonder, at the hardship that the family most likely went through.

On my Ancestry tree, the family now look like this:

Yes, it appears that the mother, Sarah Wilkinson herself was born nearby at Great Plumstead, illegitimate.

While I was looking through the roll of microfilm for Postwick Parish Registers, I spotted more names from my tree.  Children being baptised of a William Key and his wife Sarah (née Wymer).  William and Sarah Key were again, 4th great grandparents of mine.  Actually, I descend from both the earlier mentioned Rose's, and the Wymers twice over - but further back on their lines.  A lot of people in early 19th Century Norfolk were distant or even close cousins.  I'm afraid that it was true, at least for the rural poor.  I'm descended on my mother's side from a Henry & Mary Rose (née Gorll), and a Jacob & Elizabeth Wymer (née Moll), both couples at least twice over.  Pedigree folding appears on that side of my tree, in the record.

Looking through the microfilm in the Archive Centre, I recorded three previously unknown children of William and Sarah Key (née Wymer) baptised at Postwick All Saints.  I hadn't encountered them online.  They were all later births than those that I had previously found online.  This lead me to a sad thought.  You see, William Key, my 4th great grandfather, took his own life when some of those children were still quite young: 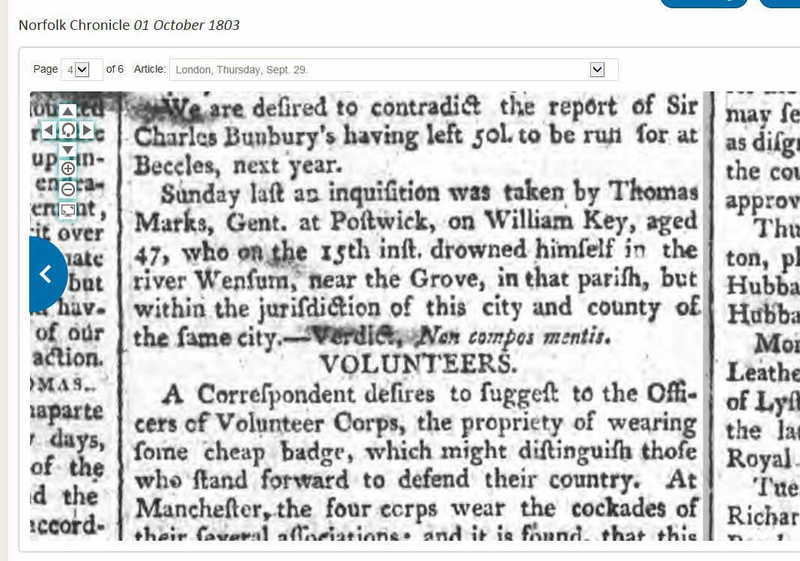 I mentioned his story in an earlier post.  His body was fished out of the River Wensum in 1803.  The inquest gave a verdict of insanity and suicide.  On the way home, I wondered about what happened to those younger children.  My 3rd great grandfather, William Key (II) was in his mid twenties, and on his second marriage, after his first wife passed away.  But what about his younger siblings, such as Abraham Key - born in 1779, he would have been only six years old when his father drowned.

When I got home, I took a look.  This is where Online Genealogy does work - because not only had Abraham survived, but he had moved away from Norfolk, as so many of the rural poor did during the 19th century.  He married Ann Goldsmith from Hassingham, and they moved south, to 19th century Southwark, London:

He survived and went on to have sons in London.

But briefly back to Postwick (pronounced locally as Pozzick) for a moment: 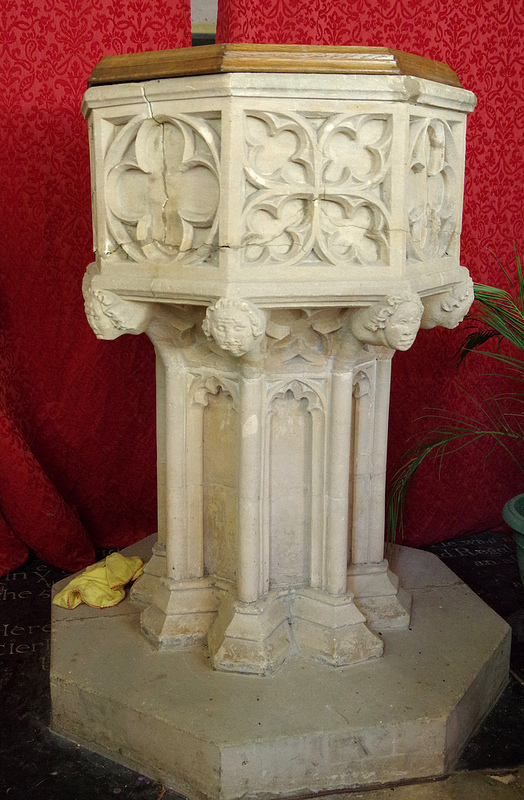 I love baptism fonts.  You can touch them, and now that your ancestors passed by them, centuries ago.  Perfect touchstones for time travellers.    My 4th great grandfather, William Key, was baptised here on 27th Aug 1778.  My 4th great grandmother, Elizabeth Wilkinson, was baptised here on 19th February 1803.  I photographed it, and touched the stone in thought of them, on 15th February 2019.