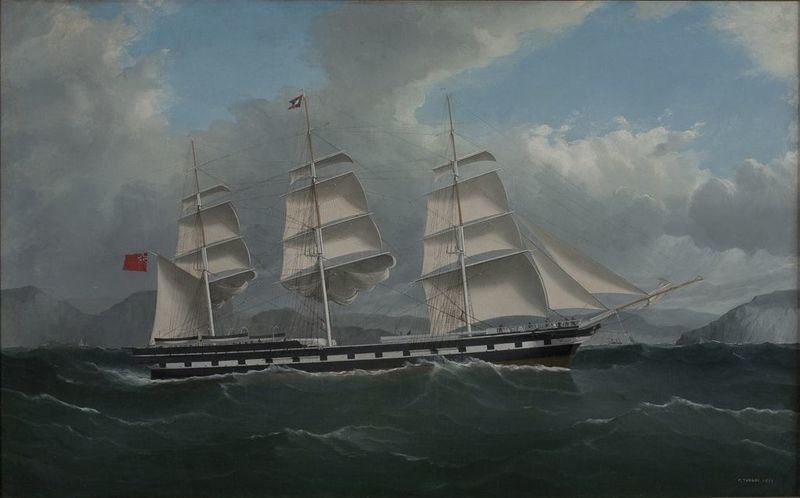 Above painting of a British passenger clipper that sailed the route to Australia.

Researching not just direct ancestry, but the branches down, I come across so many stories.  The story of my own lines is usually the one of those that stayed at home.  I have previously published the story of one of my direct ancestors, David Peach, that was forced through the process of convict transportation to leave home for Tasmania in 1837.

Recent research into what happened to the descendants of ancestral siblings has revealed another new story, of those that didn't stay at home.

My mother's family board the Epaminondas

My 4th great uncle Thomas Thacker, was born in Salhouse, Norfolk in 1825 - the older brother of my 3x great grandmother, Susannah Thacker. Thomas married Mary Ann Emerson, and at the age of 26, with his wife and two young sons John and Walter, sailed for three months on the clipper Epaminondas to Port Adelaide, Australia. They berthed on Christmas Eve 1853.


A group of congregationalists and anti-transportationists in Van Diemen's Land (Tasmania) and Victoria formed this society, with the aim of attracting respectable and hard working new settlers to Van Diemen's Land, through a bounty resettlement scheme.  My father's ancestor David Peach, was a transported convict in Van Diemen's Land at this time, serving a life sentence after being found guilty at the Lincoln Assizes, of stealing two steers.  This new scheme hoped to attract "men and women who would leaven the labouring classes and become part of a stock that would supply the ever-increasing wants of a new and fertile country".  The Society focused on the rural labouring classes of East Anglia.

The Reverend Benjamin Drake sailed from Victoria to Eastern England in order to interview and select suitable migrants for the scheme.  Drake visited South-West Norfolk.  There he encountered members of my ancestral family from father's side.

My father's family board the Whirlwind

The Riches family had moved to Great Hockham, Norfolk, from the nearby parish of Old Buckenham.  Benjamin Riches was an agricultural labourer, born at Old Buckenham in 1779.  His wife Elizabeth Riches (nee Snelling) had given birth to at least nine children at Great Hockham between 1805 and 1825.

Drake must have interviewed some of their offspring at Hockham.  He offered a bounty resettlement package to Benjamin's son, my 4th great uncle, Henry Riches, his wife Harriet Riches (nee Hubbard), and to their three young sons, George, John, and Henry Riches.  They accepted.  Not only that, but an offer was made to Henry's older sister Maria Hudson (nee Riches), and to her family.  The two families, that most likely had never seen a ship, or had travelled more than a few miles, made their way from Norfolk to Plymouth over the 1854 Christmas holidays.  There they were to board a fast clipper ship called the Whirlwind.  The clipper embarked from Plymouth on the 4th January 1855, and made a fast 86 day passsage, and arrived at Launceston, Van Diemen's Land on the 5th April.  It wasn't all plain sailing however.  Read this, it doesn't sound good:

The emigrants have passed through a fearful ordeal. An accident to the rudder compelled the commander to put into Portsmouth, where the necessary repair could have been effected in a few hours, had not the use of the empty government dock been denied by the official personage in charge who eats the salt of that nation whose funds furnished the accommodation.

Scarletina broke out: its victims were removed to an inhospitable hulk, for which the British government charged a high price, forgetful of the first duties of humanity; inclement weather aggravated the disease, which assumed a serious type, and carried off a number of victims. Twenty- three died on the passage, and although the survivors are healthy and robust, the loss of relatives and friends casts a shade of sorrow on the enterprise. We deeply sympathise with the bereaved, and the painful circumstances in which Mr. Drake has been placed must evoke the kindest feelings of his friends. His was no mercenary mission, and though he may not calculate on the gratitude of those he has sought to benefit by a removal from comparative penury to immediate plenty and ultimate affluence, he has earned their respect, and will secure the esteem of the colonists. His position has been one of great responsibility, much risk, incessant anxiety, and no profit. When years have elapsed, he may expect adequate acknowledgment from those he has served, and not till then.

The captain, too, has had his trials: his crew have been in a state of insubordination in consequence of the proper and rigidly enforced rules that excluded the seamen from intercourse with the emigrants, and the sailors have, at the conclusion of the voyage, struck. The misguided men will soon learn that here their misconduct will not be countenanced—that punishment will visit the refractory—that extravagant pay no longer prevails, and that the gold-diggers, on the average, do not make ordinary wages.

We trust the hopes of the emigrants have not been unduly elated, and that they will be prepared to accommodate themselves, as thousands more affluent have done before them, to the exigencies of a new country. The farm labourer and mechanic will not be carried off by force at any wage they may demand: the unmarried females will not be surrounded by sighing lovers, solicitous to make then brides. Australia is a land where privations must be endured, and hard work encountered. At the end of the vista, which is not long, there is settlement and independence to the industrious, the economical, and sober. Every young woman will find a husband in process of time, but before she obtain a good one she must show by her behaviour she deserves him. Everything will be new to the emigrants; they must be surprised at nothing, and become quickly reconciled to the condition of the colony. If they display those qualifications of temper and aptitude which make people uselul they will be appreciated, and experience consideration and kindness from their employers, who will in general promote their welfare to the utmost. We repeat, hard work, frugality, and sobriety for a time will inevitably lead to independence; but those who seek the latter by the shortest line must be prepared to "rough it" for a season.

What intrigues me is that they had a relative already in Tasmania.  They must have known about him.  He was David Peach, Henry and Maria's brother-in-law.  David was married to their sister Sarah Peach (nee Riches).  He may have been on the other side of the island.  He had been transported to Holbart, then moved to Port Arthur, some 17 years earlier.  Did they ever meet?  He had been pardoned four years before the Riches arrived, but not granted Leave.  It was a Life sentence.  Did he manage to communicate with his wife, and daughter that he had left behind?  Did they get word of him back to their sister Sarah?

Two years after her husband was transported away, my 3rd great grandmother Sarah, now living in Attleborough, Norfolk, gave birth to a son.  She named him David Wilson Peach.  I'd hazard to guess that a Mr Wilson was the biological father.  However, she named him after her husband - David Peach.  She was trapped.  She could not remarry (although ironically the transported convicts could).  She worked hard the remainder of her life as a washer woman in Attleborough. 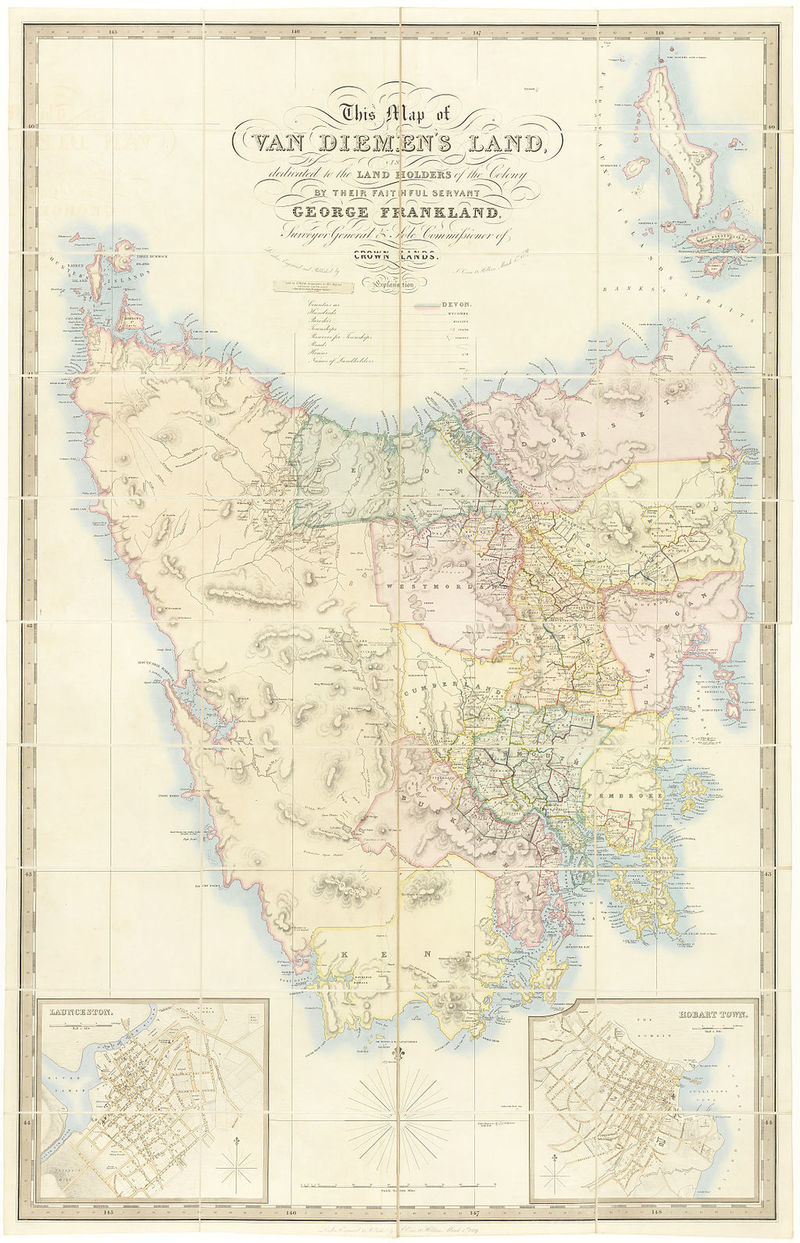 My mother's family board the Solway

Several years after the Whirlwind sailed from Plymouth, more of my family entered another ship under the same scheme.  My mother's family mainly lived at this time in the area of East Norfolk.  However, somehow, two sisters ended up working in service in South West Norfolk.  A family friend?  A trade fair?  They were both born to Thomas and Mary Ann Jarmy, who were parents-in-law of a fourth uncle of mine.  The Jarmy family lived for a while in Salhouse, Norfolk.  Although located in the Norfolk Broads, to the north east of the City of Norwich, two daughters gained employment in service in households in South West Norfolk.  In 1861, Mary Jarmy was a 25 year old cook at the local vicarage in Hockham.  Her younger sister Emily Jarmy, lived a few miles away, working as a 15 year old house servant in the household a butcher in East Harling, called Fred Jolly.

In 1861, settlers from local labouring families were selected, although Drake himself was not involved this time.  However, Hockham had clearly become known to the Society, as one of their East Anglian recruiting spots.  Mary, working in the vicarage was in the perfect place, at the right time.  My guess is that she messaged her little sister in nearby East Harling.  The recruiters wanted settlers that were "respectable and really useful persons - as far as it is possible to judge".  I believe that the father of the two sisters, Thomas Jarmy, a shepherd born 1812 in Salhouse, Norfolk, may have been imprisoned twice for larcony.  If this was the case, I'd guess that the sisters were careful to hide this past.

The Solway sailed the two sisters into Melbourne harbour on the 7th March 1862, and then they quickly boarded The Black Swan, which arrived at Launceston, Tasmania, a few days later.  En route, it appears that Mary had a friendship with Robert Mickleborough from Old Buckenham, Norfolk.  They were to marry in 1862.