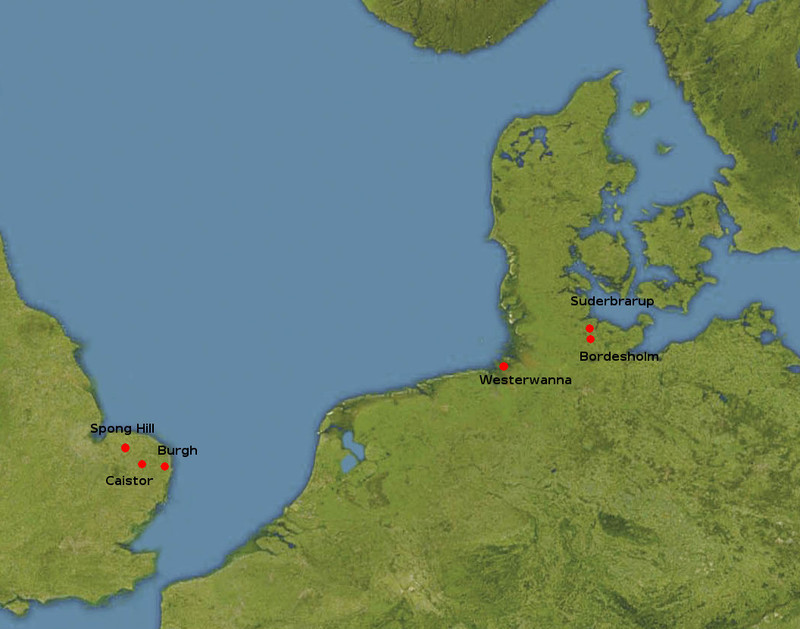 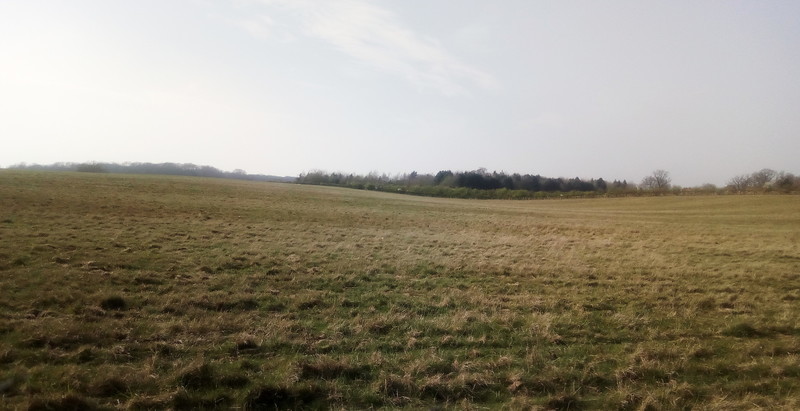 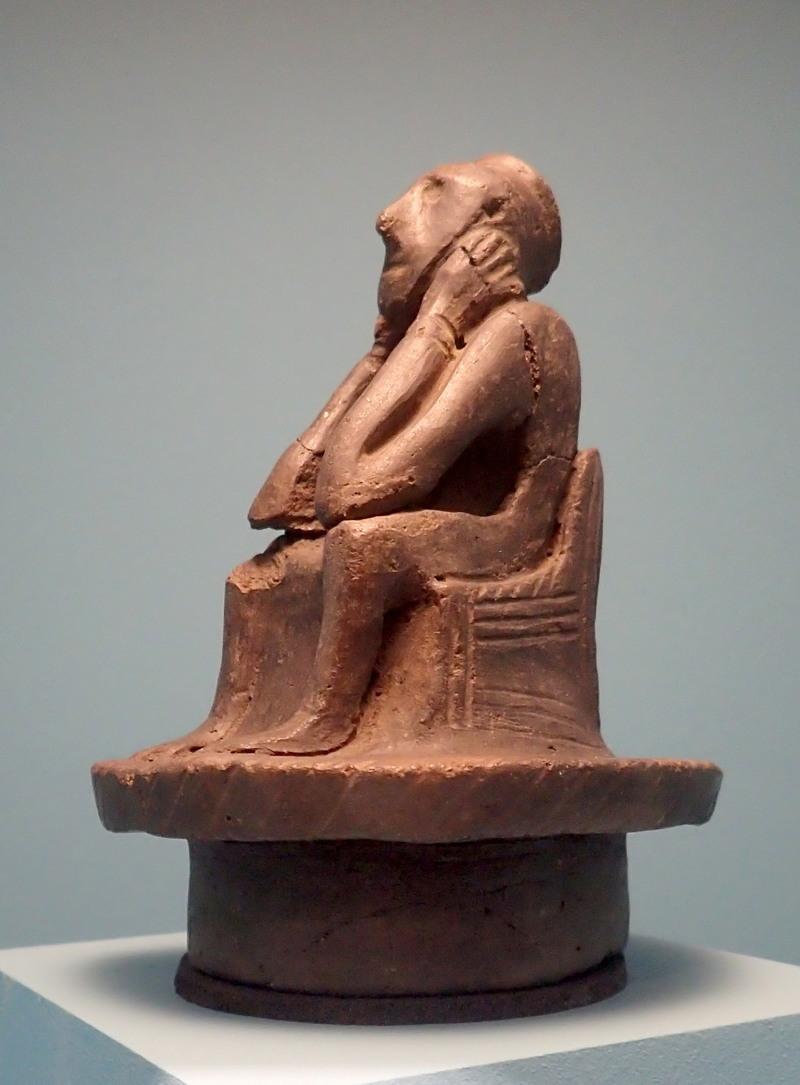 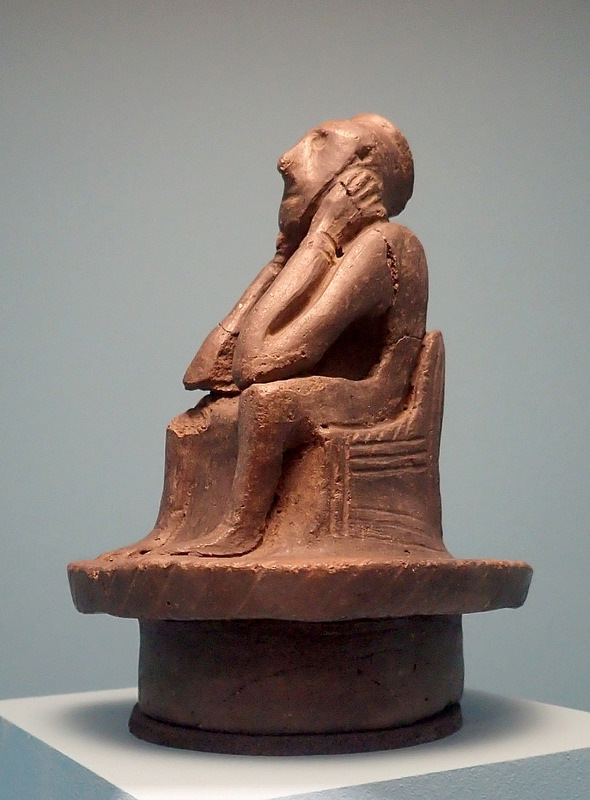 I recently visited Sutton Hoo, the ship-burial ground of early East Anglian kings.  However, Sutton Hoo, in south-east Suffolk, isn't the only known focus for the Anglo-Saxon kingdom.  Another exists closer to me, in mid-Norfolk.  Today I took a local field/road trip! 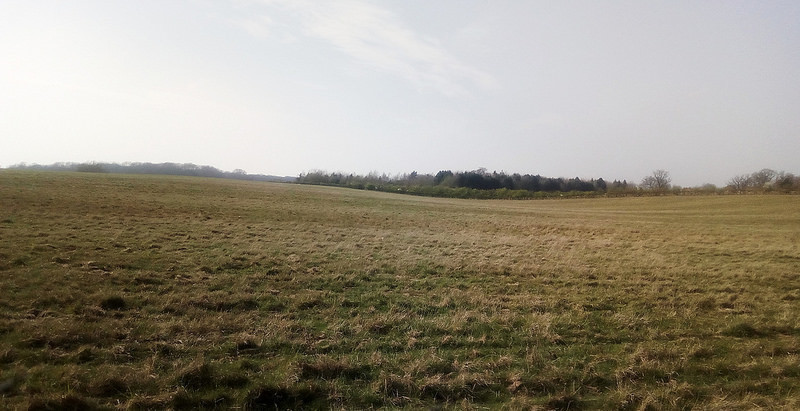 This blurry poor quality photo of a field was taken by myself earlier today.  I had to endure hunting around with grid references, and thorn scratches in order to take that.  I'm pleased.  I know what the legendary Spong Hill looks like now.  It doesn't look much does it?  However, this field has had the hell dug out of it over the past 250 years.  Why?  Because it yielded thousands of finds.  It is the site of a large and important Anglo-Saxon cemetery.  It is thought that around 3,000 people ended up here, the majority cremated.  That's a significant cemetery - 2,200 cremations dated to between 410 AD and 550 AD have been recorded here.  Many accompanied by stamped Anglo-Saxon urns, including some displayed in the Norwich Castle Museum exhibit below: 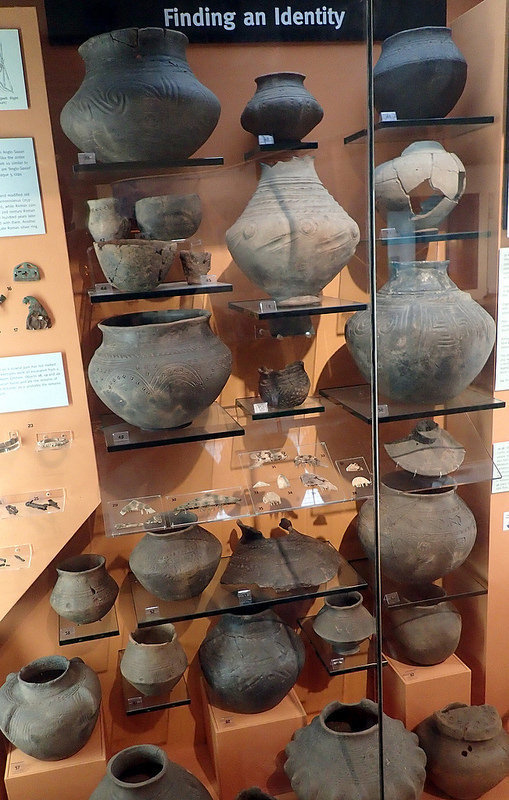 Cremations appear to have been the favoured method of disposing the dead in this cemetery, although later burials do exist on the site.  However, many of the early cremations here must have included the first wave immigrants from the Anglo-Saxon homelands on the Continent.  The most famous single artifact find in this field must be "Spong Hill Man".  The ceramic figure from an urn lid in the image at the top of this page.

My field trip today didn't end there.  Next stop had to be in the same parish.  A premium Late Anglo-Saxon site.  Again, it's appearance disguises it's former importance.  A low level ruin of a Norman chapel.  It is however believed that previous to being used as a norman chapel, and later as a medieval castle, it was the site of the very first Cathedral of East Anglia. 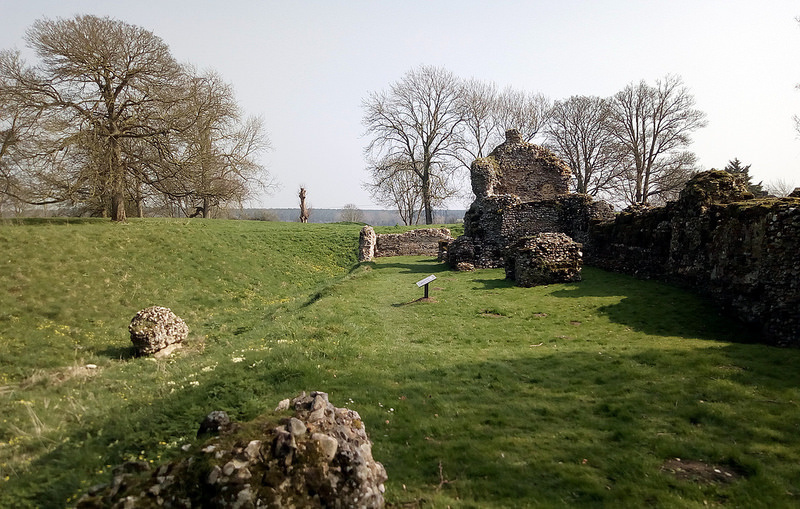 Today North Elmham is a village in Norfolk.  However, Spong Hill, and later, the Cathedral site, suggest that to the early East Anglians, this parish held far more importance.  North Elmham in mid-Norfolk was the first known ecclesiastical centre of East Anglia.  After the Conquest, the mantle was passed to Thetford briefly, before moving to Bury St Edmunds.  If you were not informed otherwise, today, you would have no idea that this village had once played such an important part in East Anglian, and English history.  An early base of the Anglo-Saxons perhaps?  Spong Hill had indeed been used by a significant local community.

Indeed, another site has recently been excavated - a Middle Saxon (AD 650 - AD 850) cemetery, only a few miles north of North Elmham, at Great Ryburgh.  This newly recorded site has hit the archaeological headlines for it's water logged timber coffins.

I love archaeology and all sorts of heritage.  However, I'm primarily a genealogist.  I'm of the school that 1) we should tell a story, and 2) we should embrace local history, archaeology and population genetics in order to tell a deeper story.  So how can I link the above sites to my family history?  Quite easily.  You see, I have lot's of recorded ancestors from my father's side - just a few miles to the south of Spong Hill.  Not all of their ancestry would have likely originated with the customers of the Spong Hill cemetery, or have venerated the timber cathedral at North Elmham.  However, in all likelihood - some of them would have.

So on this field-road trip, I venture only a couple of miles from Spong Hill, to a 19th century site of my ancestry that has a story worth telling. 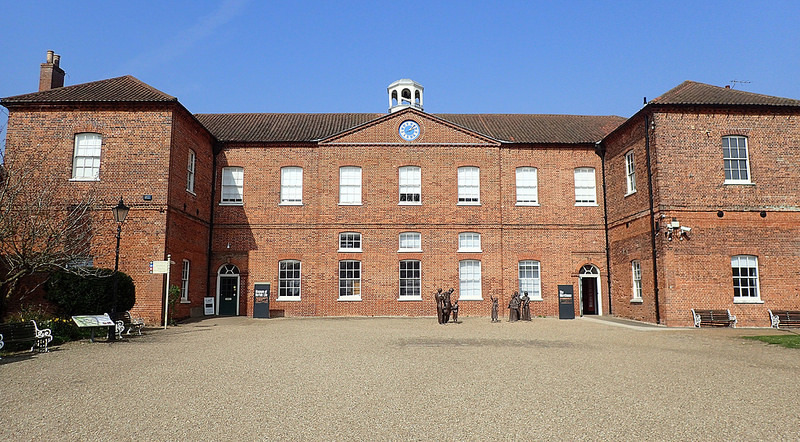 Gressenhall Workhouse.  Built in 1779 to house the poor of the local hundred.  It transformed into a less friendly place with the Poor Law Union Act.  I have joked that this is the family estate, as a number of my father's ancestors were associated with it.  As inmates unfortunately.  My 2xgreat grandfather William Bennett Baxter was born here in 1846: 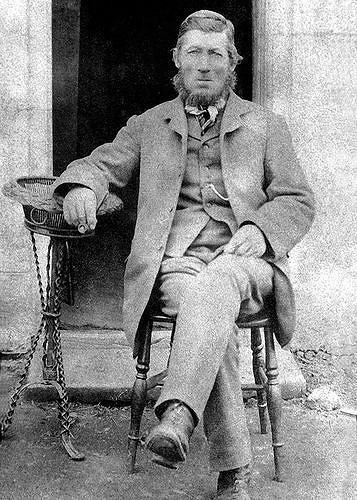 His birth was illegitimate, and his mother, Eliza would have been a Jacket Woman: 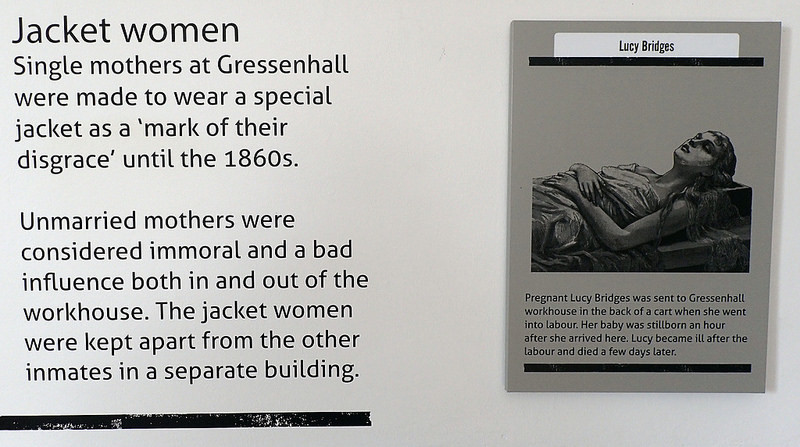 He was not listed in the workhouse during the 1851 census.  He did later, on in a marriage register, claim William Bennett (who was a young but married local miller) to be his father.  His known ancestry was all local to the Dereham and mid-Norfolk area: 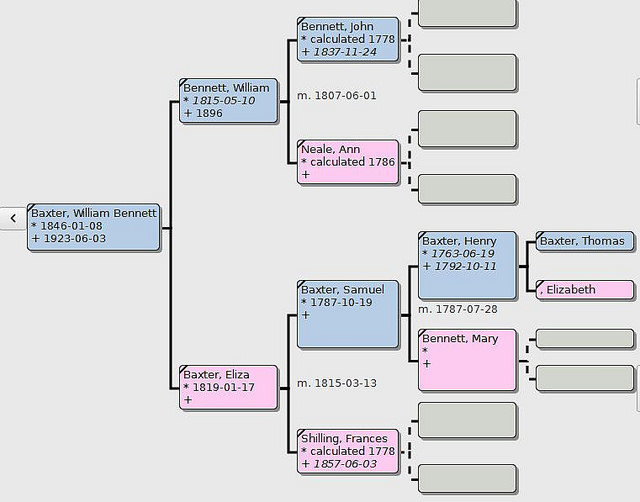 Could this be his initials that I today saw there on a wall in what use to be the boy's courtyard? 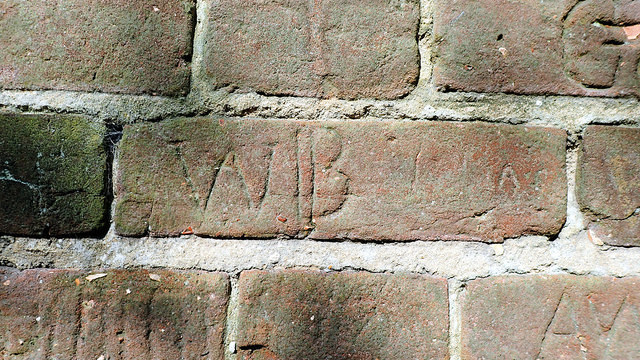 He married Harriet Barber who had also been born in Gressenhall Workhouse!  She was born there in 1847.  Harriet was also of a local family - and one with a history of illegitimacy.  The below pedigree chart is of her mother, also Harriet Barber, born at nearby Swanton Morley in 1826: 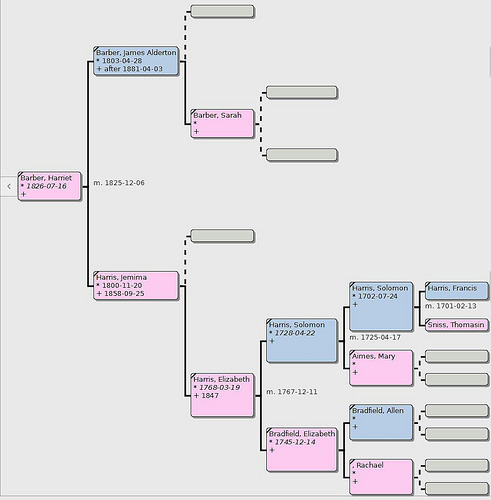 Her family were mainly in Swanton Morley - and with that high level of illegitimacy, I have tongue-in-cheek, suggested that as Abraham Lincoln's paternal line were in that same village, that we could be related there.  The point that I'm making is that these were local, rural, poor people, with most likely, local ancestry in that area.  The people inhumed at Anglo-Saxon cemeteries nearby most likely did count within at least a part of their ancestry.

So both William and Harriet were born illegitimate in the workhouse at Gressenhall.  The surprise that follows is that so were their first two children some years later.  Then they settled down in the Swanton Morley and Northall Green area near to Dereham.

I'll finish off this photo-blog of today's journey through ancestry with a simple photo, of a local lane in the area: 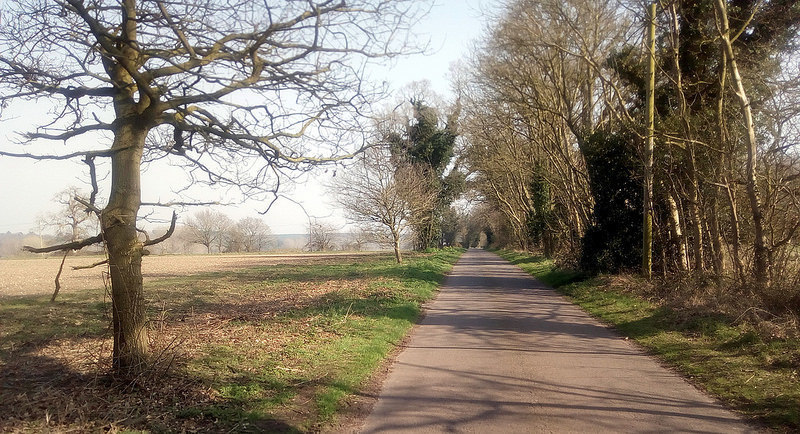