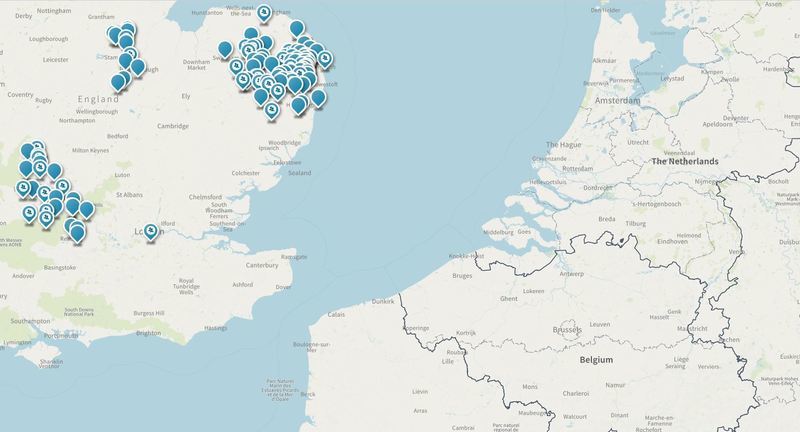 The above image illustrates of some of my ancestral locations, as according to documented genealogy.  As can be seen.  I have quite a lot of East Anglian ancestry.  What might also be observed, is the location of East Anglia, and of South East England, in relation to Belgium, the Netherlands, and North East France.

I'm an East Anglian.  Much of my family tree is East Anglian.  Before documented genealogy picks up my family trail, who were the East Anglians, what were their origins?  The traditional answer would be that they were the descendants of the Angles.  An early 5th Century AD tribe, that relocated from Angeln, now in Schleswig Holstein, on the North Germany, South Denmark border.  Them, and maybe a few Saxons, Jutes, Suevvi, etc.  All pretty much from what is now North Germany and Denmark.  See the map below: 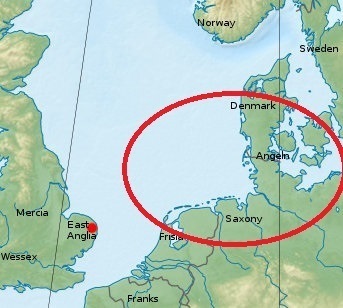 Archaeology sort of backs this up ... but also offers some slight alternatives.  At first, British Archaeology supported the Historians - that there was a near genocidal event during the 5th and 6th centuries, where the Anglo Saxon tribes arrived and displaced the Romano-Britons that had until then, lived in South East Britannia.  There certainly is plenty, even, overwhelming evidence, of Anglo-Saxon culture if not settlement in East Anglia at this time.  Below are the locations of a few of the many Anglo-Saxon cemeteries found in East Anglia - and their closest artifact correlations on the Continent - in Northern Germany: 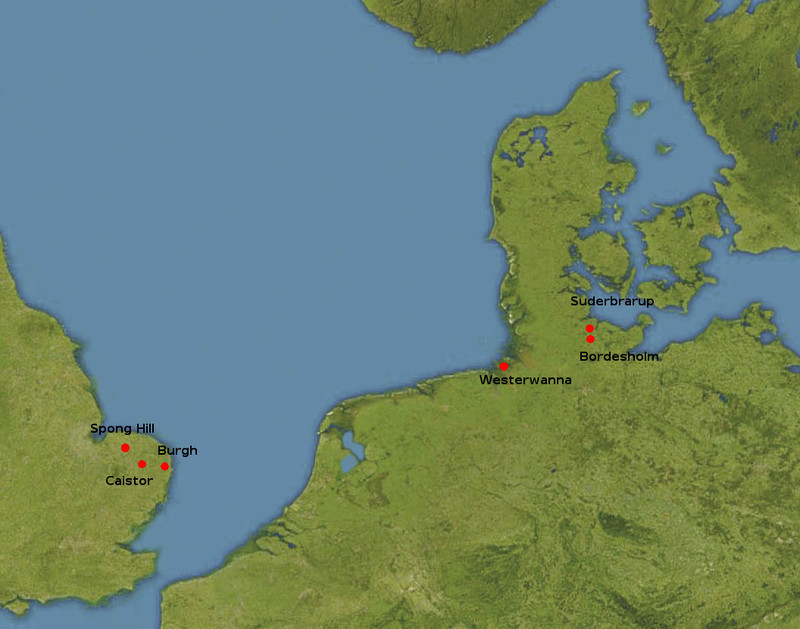 It's all adding up.  However, then, a new trend appears in British Archaeology that plays down the Anglo-Saxon invasion hypothesis. From the 1980's onward, some British archaeologists started to argue that they saw patterns of land use continuity between the Romano-British and Pagan Saxon periods.  They argued there was no archaeology of genocide.  No battle sites.  No mass graves.  Instead they proposed that only limited numbers of Anglo Saxons arrived - and that their culture was largely adopted by the Romano-Britons that already lived here.  Some even suggested that no Anglo Saxons came here - it was merely a cultural import.

Then Genetics stepped in.  Most notably with POBI (Peopling of the British Isles) 2015, but also with a number of other studies, often comparing the DNA from excavated remains to modern populations.  They proposed a new middle house consensus.  No there was no genocide.  The modern English have more old British ancestry than Anglo-Saxon.  However, there was a significant Anglo Saxon immigration event.  But they mixed, intermarried.  Anglo-Saxon culture was adopted, but Anglo Saxons had not displaced the Britons.  They had married them.  The modern English it seems have around 10% to 40% Anglo Saxon ancestry, and 60% to 90% British.  Sort of watered down Celts.

The assumption that we have made, is that rural populations on the front-line immigration - such as East Anglians, were the most watered down, with highest percentages of Anglo-Saxon ancestry.  Why not.  The archaeology would support that.  The East Anglian landscape is littered with Anglo-Saxon, and Anglo-Danish place-names.  It is the most Anglo-Saxon landscape, and later, was firmly within the Dane-Law.

It's all over this blog.  However, in summary, I am an East Anglian.  Born at Norwich, with all four grandparents of Norfolk birth.  I have been researching my family tree using genealogy, for thirty years, on and off.  I have accumulated the recorded names of 490 direct ancestors.  Around 80% or more of this ancestry lived here in East Anglia.  At Generation 6 (3rd great grandparent), my ancestry was 97% South East English, and 3% Swiss.  This is demonstrated in this fan chart of my recorded ancestry: 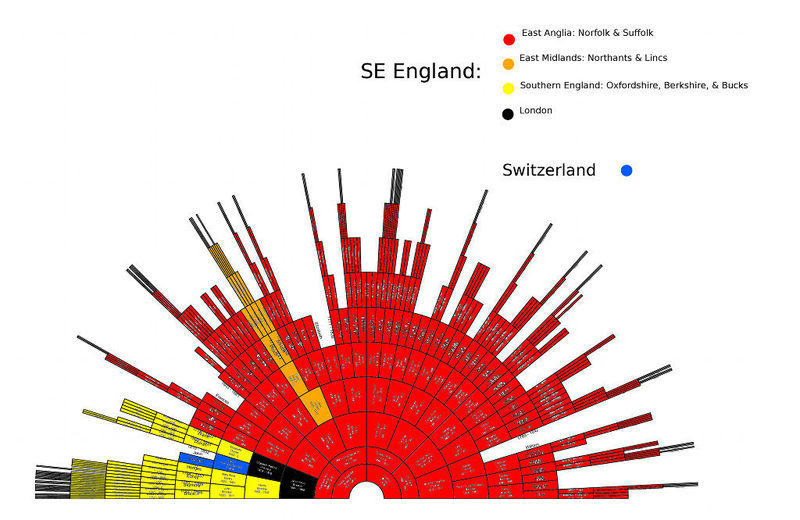 If that's not East Anglian enough - look at the right hand side of that fan chart, my mother's side.  My mother has 225 of her direct ancestors recorded, and everyone lived firmly in East Anglia.

I have documents, likenesses in family photos, and family stories to back my narrative ancestry; but I am also gradually building biological evidence through the use of DNA matches to other testers, that share a common ancestry with me, that correlates well with the shared DNA: 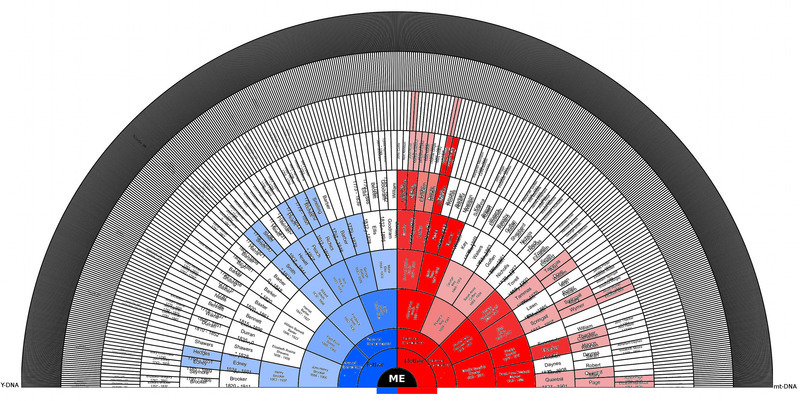 That the vast majority of our ancestry is very rural, and poor agricultural working class, would suggest that we have had ancestry here in East Anglia for a very, very, long time.  I have traced some lines back to early parish records in the 16th Century.  I would expect that many of our ancestors belonged to peasant families in Medieval Norfolk and Suffolk.  These, I'd expect were the descendants of Anglo Saxons, Romano-Britons, and Danes.

Population Genetics and the DNA

Documentary evidence confirms that I'm an East Anglian, and English.  But when I tested with the commercial DNA-for-ancestry vendors, such as 23andme or FT-DNA, my results, although seeing me as pretty firmly, a North West European, doesn't really see me as particularly British.  23andme suggested only 32% British.  They instead suggest that my ancestry is rather Continental.  High levels of "West European" or "French & German".  I at first assumed that this was ancient or early medieval ancestry, my Anglo-Saxon and Anglo-Danish East Anglian roots showing through.

But is that the case?  Analysis using some of the latest calculators challenge that.  Here are the PCA locations of myself and my mother, on one such calculator.  This one (By David Wesolowski) includes many modern references grouped on language family, but also includes some references from actual ancient DNA in Northern Europe, including some extracted from Anglo Saxon remains in Cambridgeshire, close to East Anglia: 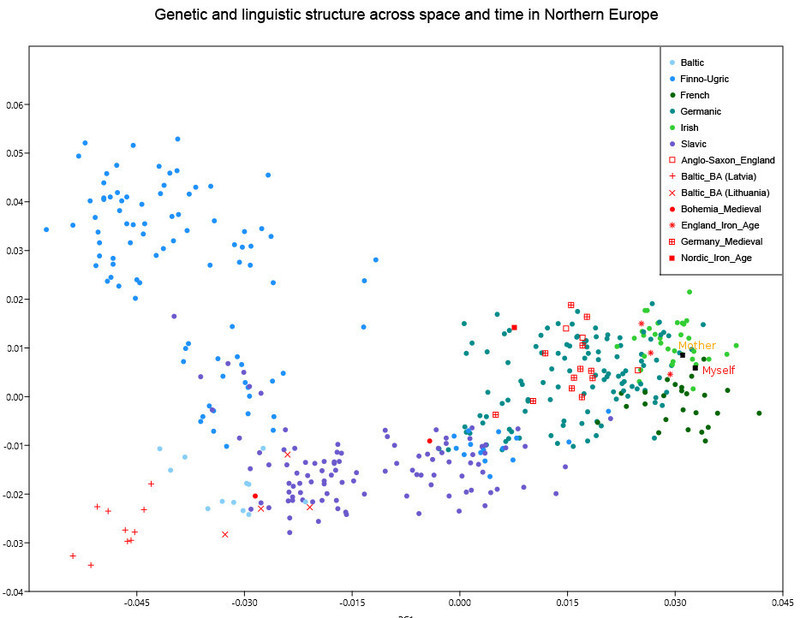 You see the red squares represent the Anglo Saxons in Cambridgeshire?  Mine and even my very rural East Anglian mother's place well to the right of them, closer to modern day Irish speakers, overlapping with modern day French speakers.  More Celtic it seems than Anglo Saxon.

Here's another PCA showing our positions (red myself, orange, my mother), this one by Lukasz, but based on the Eurogenes K36 calculator: 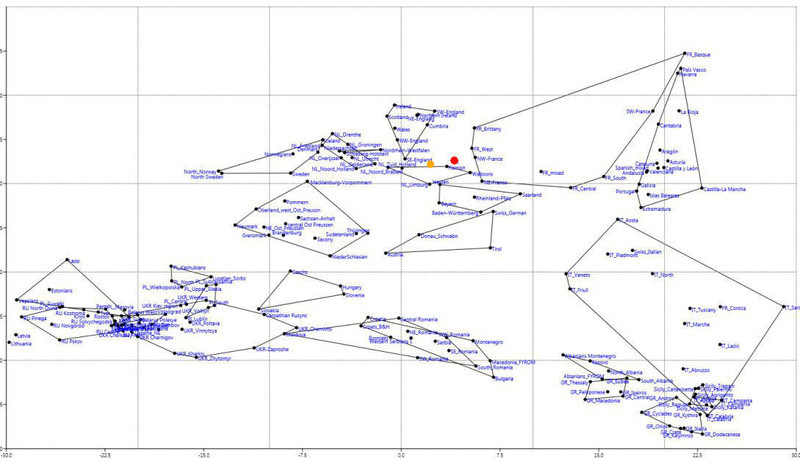 It puts me closer to Flemish then Walloon, followed by SE English.  Finally a third PCA, from Eurogenes K15: 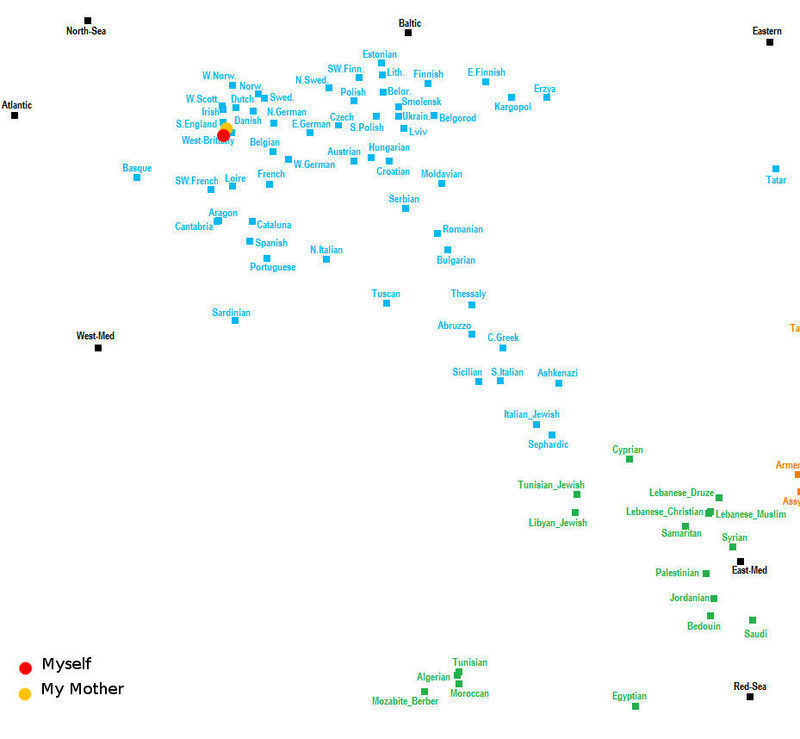 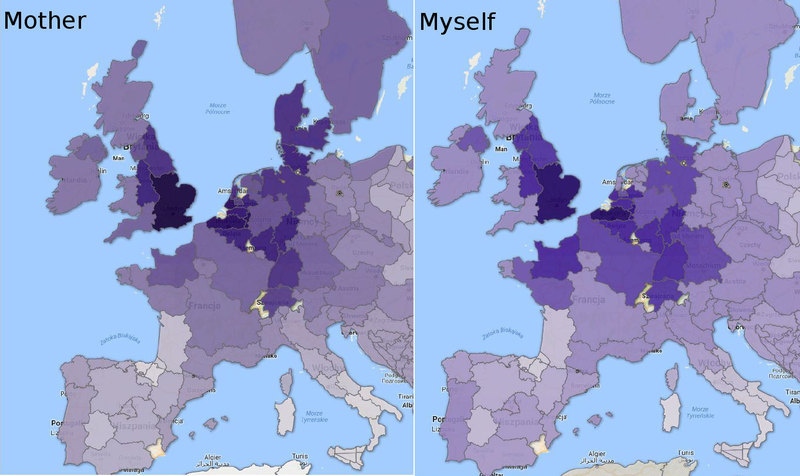 My mother has a slight more pull from Denmark and Schleswig Holstein.  Perhaps this is from early medieval Angle/Danish settler in East Anglia?  However, we both pull strongest outside of England, from the Low Countries.  Flemish, Dutch, and Walloon come up as closest Continental matches.  I'm not surprised.  I've noticed for some time, that the big vendors appear to give some testers of Normandy, Hauts-de-France, Belgium, and the Netherlands ancestry, very similar results to my own.

If our results were at all representative of East Anglians of local ancestry, then the modern East Anglian is perhaps as much, or more of a Belgian than he or she is a Dane or Angle.  So I've added a secondary circle to the map that I used above, to illustrate what are popularly beleved to be the origins of the East Anglians.  The new blue circle, represents not what history or archaeology suggests, but what my family's DNA currently suggests: 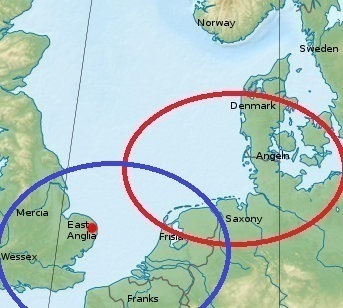 Note that I have included South East Britain in there - because clearly, there was no displacement.  The Romano-Britons were among our ancestors.

It has long been noted, that the very closest dialect or language to English, is West Frisian.  Old Frisian and Old English (or Anglo Saxon) were close.  Linguists group them together as "Anglo-Frisian".  Why is this?  If we all descend from Angles and Danes?

When did our "Belgian" ancestors arrive in Britain?

By Belgian, I'm referring to ancestors that we share not only with Belgians of local ancestry, but also the North French, and the Dutch.  Answer.  I don't know.  All that I am pointing out, is that the DNA of my East Anglian family appears to be more like that of people that today live in that part of the Continent, than in Denmark, Norway, or even North Germany.  However, here are a few ideas:

Summary.
All of this hinges on the DNA test results of just one Norfolk family.  I'm just making observations here, and I would so love to see more East Anglians test, and to use these calculators, to explore their ancient ancestry as well.  I have seen only one other East Anglian of a local family test, and their test results were similar to my own: 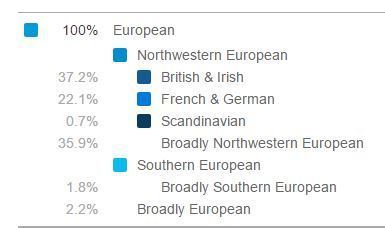 The other East Anglian local tester: 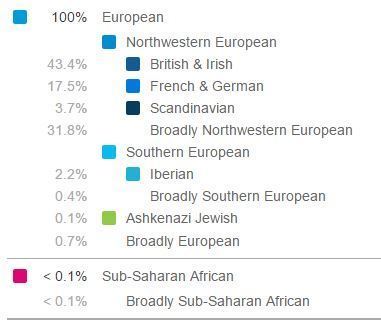 Pretty similar.
I'm NOT claiming that modern East Anglians or South East English, of local ancestry, do not have Anglo-Saxon, or perhaps Old Danish ancestry.  My mother's K36 radiates slightly around Denmark and Schleswig Holstein.  I'm NOT claiming that all East Anglians with local family trees would have the same results as my family.  However, if they did turn out to do so... then it would appear that we have so far under-rated our close relationship to the Low Countries.
We need more ancient DNA from Anglo Saxons, Angles in Schleswig Holstein, Frisians, Iron Age South-East British, South-East Romano-British, Franks, Old Danes, and others if we are ever to sort this out.  And we need more South east English of local recorded ancestry to DNA test, and to take an interest in population genetics.
Until then, I will postulate that on top of that red circle (Denmark, Northern Germany) - we South East English have more ancestry from that blue circle (Netherlands, Belgium, and North East France), than is popularly assumed.
views